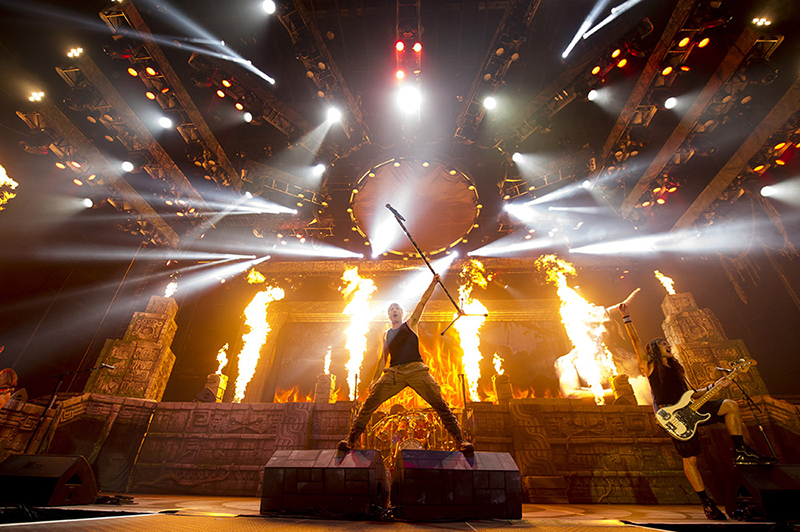 Ghost play about a 40-minute, eight-song set. The songs, for the most part, did sound like they do on record. The Ghost’s strength—in taking the opening slot during which they obviously have to strip down their normal headlining antics—came from enigmatic frontman Papa Emertius. His conversations with the crowd were lighthearted and engaging, fitting for a band that has dark lyrical themes with a pop-music twist—hence Ghost’s emerging popularity with riff-heavy but pop-twisted tunes that come off catchy as hell. The growing crowd was quickly engaged with the ultra-catchy “Square Hammer,” calling for listeners to swear for the devil. I did an interview for SLUG with Ghost in 2012 as they were touring for their debut record, which made me think about that early time when Ghost talked about their goals to garner a larger following. Now, Ghost is definitely on the cusp of that goal, playing in such a large setting.

Iron Maiden are a road-hardened band that have the ability to bring the spectacle of a stage show. However, Bruce Dickinson’s vocals were at most times inaudible, full of reverb and cut-outs. I saw Iron Maiden at USANA in 2012 for the Maiden England Tour, and the sound was absolutely fantastic—especially for an outdoor show. So it was a bit of a shock that the sound with respect to Dickinson’s vocals was not corrected even in the slightest. With the Air Raid Siren—a term coined for Dickinson’s vocal prowess—broken, it was irksome. If it wasn’t broken, it would have made for a prime heavy metal experience—still, Maiden reigns supreme.

The Salt Lake Tribune’s headline for Eric Walden’s review of the concert stated, “Sorry, Iron Maiden, but Ghost stole the show.” Walden said in his review about Iron Maiden’s performance, “Problem was, it didn’t particularly feel afterward like I’d seen something legendary. And my socks didn’t go anywhere.” I have to firmly disagree with that sentiment—by the end of Iron Maiden’s set, my socks were nowhere to be found, while after Ghost’s performance, my socks were snug on my feet.

There have been fan complaints on social media and complaints in other online reviews, even the Tribune’s review, about songs that Maiden did not play. Fans knew this going to the show: It is “The Book of Souls Tour,” The Book of Souls being Iron Maiden’s latest full-length album released in 2015, which is conceptually based around ancient Mayan culture. Out of Iron Maiden’s 15-song set, the band played six songs from The Book of Souls album, including two that run over 10 minutes in length. I did not care one bit. The sound mixing for the guitars and drums was on point. Iron Maiden are a live band—yeah they’re great on record, but when you get the mixing of three guitarists, bass and drums—all with cohesive ease—and grandiose, galloping riffs with harmonies and melodies absolutely crushing everything, you just can’t beat that. It’s a complete guitar-ear orgasm.

The only cut that didn’t engage me was the show opener, “If Eternity Should Fall.” Everything else was mind-blowing. While the shorter “Speed of Light” and “Death or Glory,” were rocking, the longer “The Red and the Black” and “The Book of Souls” gave me goosebumps.

Yeah, the vocals were screwed up. The set wasn’t filled with fan favorites of the most common music per Iron Maiden–live tradition, but the stage only reinforced Iron Maiden’s live domination. The stage setup was simple and, in many ways, classic Maiden: a small re-creation of Mayan ruins with torches that would ignite in a fun pyrotechnics display with changing backdrop images of Iron Maiden’s mascot, Eddie, in different artistic renditions. Maiden don’t rely on new technology to put on a show. The only use of any type of video was from USANA’s own gear projecting video onto the sides of the stage—the stage setup, the appearance of Eddie, pyro, lights, a massive Eddie head and a giant Beast all could have been a stage show for Maiden straight out of the ’80s. The stage imagery was constantly ignited by the band’s non-stop energy. Classic Dickinson  ran around the stage jumping off of fixtures, and the guitarists swung their axes around with ease and constantly traversed the stage to the point of a sort of leg-stretching yoga pose.

Ghost did put on a fun show, engaging the audience with a great sound. It still cannot top the live experience of Iron Maiden—there’s nothing on earth like it, and there never will be. There’s a reason that Maiden have performed legendary shows like the Rock In Rio performances, one in 1985 that had Iron Maiden playing to 300,000 fans and one in 2002 playing to 250,000 fans. Friday, July 7, 2017 in West Valley, Utah, 20,000 fans came to pay homage to the legend that is Iron Maiden and spent their hard-earned money on inflated beverages and food, but I swear that 70 percent of the crowd had brand-new Iron Maiden T-shirts—and I heard not one complaint from a single fan after the show. Iron Maiden are the ultimate live heavy metal band.