In light of April being sexual assault awareness month, the best of Salt Lake City came together to help raise money for the Rape Recovery Center. Westminster College partly produced and financed the event, which was held at their the newly built dorm building, Westminster on the Draw, while organizations like Westminster’s V-Day Club and local businesses such as Raunch and Diabolical Records were sponsors. Local bands Barbaloot Suitz, Genre Zero, Bombshell Academy, Wildcat Strike and Juana Ghani took to the stage for the concert portion of the event. 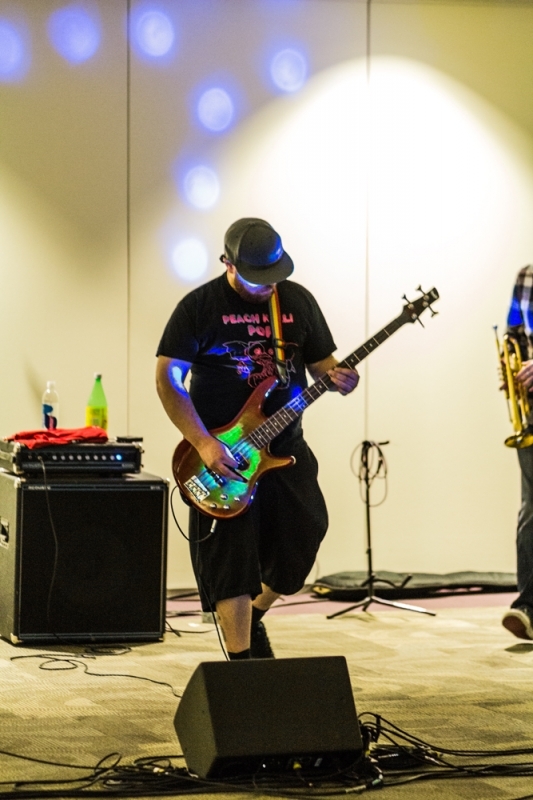 In light of April being sexual assault awareness month, the best of Salt Lake City came together to help raise money for the Rape Recovery Center. Westminster College partly produced and financed the event, which was held at their the newly built dorm building, Westminster on the Draw, while organizations like Westminster’s V-Day Club and local businesses such as Raunch and Diabolical Records were sponsors. Local bands Barbaloot Suitz, Genre Zero, Bombshell Academy, Wildcat Strike and Juana Ghani took to the stage for the concert portion of the event. Along with the live acts, a silent auction was set up with packages donated from local businesses and record labels. All proceeds went straight to aid the Rape Recovery Center in their mission to empower survivors of sexual violence.

Though the timing as a coincidence, in light of the recent controversy surrounding the Salt Lake Police Department’s status of testing of rape kits, this event couldn’t have been better timed. Even though, it was total coincidence, the importance of this event is highlighted. The process of organizing can largely be credited to the tireless efforts of Josh Isbell (Genre Zero), a Westminster College Alumni and previous member of V-Day Club. Isbell got the ball rolling by running around town with bandmate and fellow Westminster alum Rob Vorwald as they put up posters and signed up sponsors and bands for the gig. “Just seemed like the thing to do,” says Isbell.

Upon entering the lobby of the rented space, I am confronted by a bake sale being put on by the V-Day Club. While buying a brownie, I glanced over the information advertising the need for volunteers by the Rape Recovery Center, and looked over the packages that were donated for the silent auction. The various packages included notable recordings of local acts like The Red Bennies, Vile Blue Shades and Genre Zero on 7” records. Other packages included comics, artwork (some of which was donated by Eleanor Scholz) and even a Numark USB powered record player.

Kicking off the night, Barbaloot Suitz provided an entertaining act that included beat-boxing by Fish (of Wasnatch) and rapping from Jonall Sorenson. Next on the cue, Genre Zero blasted out punky, folk-filled passion to a small but fixated crowd. Having seen them before, I am well familiar with their exciting energy. The band seems to channel into Isbell’s constant twitching, which provides an excellent stage presence that reminds me a little of Elvis Costello. The combination of the heavy beat, prominent violin and Isbell’s seemingly uncontrollable bouncing around inspires a wave of the audience’s knees to jerk. Including, those of yours truly. Salt Lake City now has its equivalent to a pub rock band—though a bit clean, they always put on a thoroughly enjoyable show.

Following in the wake of Genre Zero’s performance, Bombshell Academy launched into their set with a highly energetic ’90s pop-influenced ska, providing an uplifting atmosphere and danceable tunes, to which only a few people actually danced. It was by this point noticeable that the turnout for the event was not very high. I also observed that there were more Westminster Alumni than actual students in attendance. I found this was odd, since the gig was being held in the basement of a dorm building.

Unfortunately this gig was scheduled on a night that conflicted with other events around town. Also, the lack of alcohol available on a Friday night probably contributed to a lower attendance. Even with these factors in consideration, Bombshell Academy and the other groups played with commendable energy and presence—giving it their all and just enjoying being there despite a small and thinning audience.

Wildcat Strike continued the trend of putting on a good show, though their lack of cohesion shinned brightly on stage. Playing very indie-influenced rock, they blasted out intense energy that lapsed in between songs as they kept pausing to tune up. Even through this, they still held a dedicated contingent of people toward the front of the stage. It helped that the keyboardist added flavor to their mix of Mumford and Sons-esque tunes. Overall good, but they could probably polish it up a bit.

Concluding the evening’s performance, Juana Ghani blasted out a wild gypsy folk set, complete with belly dancers. Much to the delight of the crowd they played the classic “Those Were The Days.” Something must be said about the beauty of gypsy-influenced music, especially when blasted out with infectious ferocity. It churns out an addictive voodoo-like spell into the audience, allowing one to leave on a high note. Those who had otherwise remained motionless throughout the festivities of the evening were persuaded to dance. By this time the crowd was mostly made up of the members of the other bands.

Continuing on the high note, the Rape Recovery Center is due to receive about $1100 raised from the event. The gig had been a success, with everybody volunteering their time and energy to help empower those who have survived sexual violence. Taking my leave as Jared Mcintyre took down his sound equipment after over 12 hours of volunteering, I couldn’t help but appreciate the time and effort that went into organizing this. Good on them.

Check out SLUG’s photos of the event here.