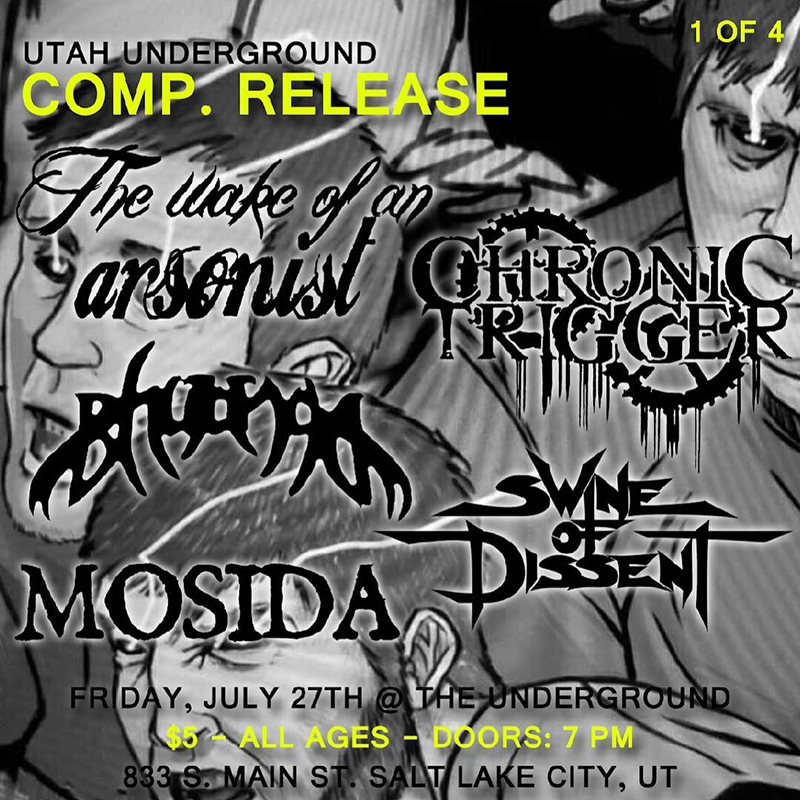 Utah Underground Compilation Release Shows 1 & 2 @ The Underground & The Beehive With:...

In celebration of the first Utah Underground Compilation, the featured bands have all gathered for four separate shows for its release. Spearheaded by Sean Dugger, the first two shows were a success, minus one holdout—Villain had to drop off the show on July 28 due to vocalist Trent Falcone having double-booked himself between work and the show. However, the shows were still great and the lineups, flowed together seamlessly.

I could sum up this show with just one word—HEAVY! Every single band on this bill had an emphasis on slamming, brutalizing tones under their respective styles. The first band was Chronic Trigger—a unique blend of progressive and technical precision with in-your-face, thrash-n-bash projection. While they showcased their instrumental capabilities, it never felt like they were showing off how many notes they could play or how many time signatures they could switch to. They always looked like they were having fun constantly throbbing themselves in sync with the music and throwing verbal jabs at each other between songs. Mosida seemingly came right out of left field with a sound that felt so big that it couldn’t be contained in the small room of The Underground. I actually had to step out for a while because it was so loud. Still, the performance was pretty flawless, despite the fact that the vocals were barely audible. That’s just how The Underground is set up; certain parts of the music get lost behind the wall of sound.

Swine of Dissent brought the sound back to a more classic metal vibe, more comparable to DIO and Iron Maiden, but in a drop-tuning way. The riffs were swaying, and the hair went flying as Miles Collins wailed his lyrics behind his thick veil of dreadlocks. Keeping the high-speed, metallic velocity in check, Bhujanga unleashed an assault of teamed up guitar riffs and dueling solos, though noticeably absent was a bassist, they still pulled off their low-end while keeping the focus on the guitars and vocals. Lead singer Justin Gomez would throw himself to the ground and throw spastic kicks in the air—it was so invigorating that I completely forgot that he stayed behind the drum set for their entire performance, for some reason.

The heaviest band was last. I’ve seen The Wake of an Arsonist before, when they started as a sluggish, unfiltered doom metal band. Through a marathon of lineup changes and Sean Dugger moving from behind the drum kit to behind the microphone—they’ve accumulated a cacophony of sludgy riffs and tower-tumbling breakdowns that amount to what I can only describe as sheer brutality. TWOAA’s sound can’t be explained. It needs to be felt. I was completely immersed in their performance, and I thought my head was never going to stop banging. Those chugging riffs threw the hardcore kids in attendance into a flurry of back fists and spin-kicks (some of which were ignited by Dugger himself.)

Thus ends the first of the four shows for this comp’s release. While it was a strong opening night and judging by the remainder of bands yet to play, I knew that the next few rounds would get gradually more chaotic. 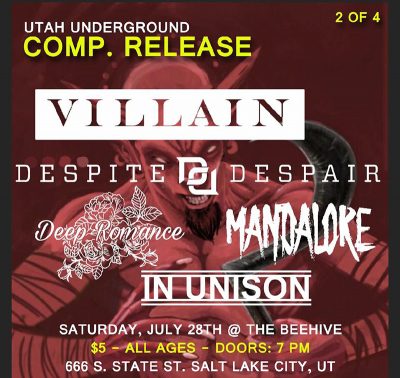 As I walked up State Street towards 666 South, I was greeted by the congregation of hardcore kids accumulating just outside of The Beehive. I was overwhelmed with a sense of community—really, these shows are mostly just friends hanging out while they play music. The only band that was the outlier of the night was KnuckleDragger, both sonically and socially. While the other bands on the bill are more less advocates for the modern hardcore scene, the dudes in KnuckleDragger are a bit more experienced than the others. Yes, age isn’t everything—and KnuckleDragger put on one hell of a show.The good thing about them meeting the other bands is that the Utah Underground compilation and its adjunct shows to it represent that while it’s good to support your homies’ bands, it also serves as an opportunity to introduce different groups to each other as well. I’d say KnuckleDragger won over some new fans with their performance.

While The Beehive has a stage, each band played on the floor. It is either a visual metaphor that everyone in this community is seen as equal, and the connection is made stronger between the bands and audience—or everyone was too lazy to haul their gear onto the stage. In Unison charged with ferocity with a set that was maybe 15 minutes long, as is expected with a very cut-and-dry hardcore group. They didn’t waste a second as lead singer Joselyn Pust’s yells were met with some avid slam-dancing, some of which caught her in the rift. The same energy carried into Mandalore’s set, and even I couldn’t resist the urge to dance despite my body telling me otherwise. Their performance was spastic as lead singer Konrad Keele jumped from one side of the floor to another. In between songs crowd members (including myself) haggled him with subjects ranging from Star Wars to his source of hydration to which he responded—jokingly—that Gatorade pays him $800 every time he tells his audience to drink their product. These are the things that make these shows so fun and after their performance, some of us chilled outside and discussed the Star Wars cannon with Keele. The next band that took the floor was Deep Romance—a band who is all-inclusive with their performance, inviting Pust and Martin Theisen (bassist; In Unison, The Wake of an Arsonist) to sing their verses in “Cholo Glide” and “Vultures.”

Finally, one of SLC’s biggest exports, Despite Despair were set to close the night. With all the bands’ prior performances still fresh on the mind, they would have to hurtle one hell of a set. Soon, the lights went off, save for one troubled light that hung from the overhead beam, and Despite Despair shot off like a fucking missile and leveled the place out! Vocalist Brett Barrett took advantage of the fact that the audience was mere inches away from him. He crawled on all fours, pulled people in and screamed in their faces, pushed them out and got them dancing and all while wearing nothing but gym shorts—he was downright feral. For their last song “Post-Purging Reflection,” they invited the pint-sized Brighton Ballard of Soriah to assist on vocals. Don’t let her size fool you, Ballard threw down some grinding vocals so harsh that I couldn’t tell who was singing. In short, they fucking killed it!

This night’s show exceeded my expectations and encapsulated everything that makes this scene work. It was communal with people dancing with, or rather into, each other and literally jumping at the opportunity to scream their friends’ lyrics. People were introduced to groups they’d never think to listen to. It’s going to be hard to top this one, but we will see what’s in store for the next two shows this week, the third of four tonight, Thursday, Aug. 2 at The Underground; and the fourth and final show on Saturday, Aug. 4, at Metro Music Hall—each at 7 p.m.