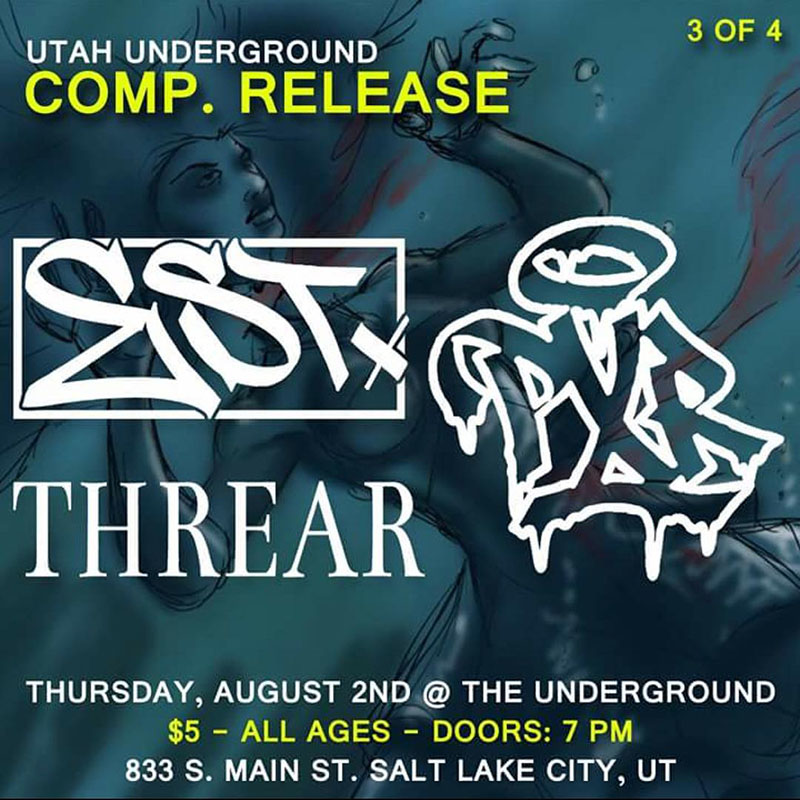 Talk about a show that took a beating—not only did the five-band bill get whittled down to three after Population Control and Communionist, whom I was most looking forward to seeing, dropped off, but this was also doubling as Establish’s last show. While bummed out at the situation, I still maintained a level of optimism. Aside from just hanging out with friends and watching their sets, it was also my first time seeing Threar, a four-piece act comprising a mix of sifting melodies and an abrasive wall of noise that hit me broadside. Threar’s performance, put bluntly, was intense. Sound-wise, they were unpredictable. There were parts that were softer and quieter but left me with an unnerving feeling that something insane was going to happen. The buildup paid off with slamming riffs that echoed through guitarist Wolf Nunley and bassist Christian Howton, thrashing their bodies while keeping their playing intact. I joked with Howton afterward on how he had to make himself look busy while playing one note the whole time.

The next band was PXR or Positive X Reinforcement—keeping the vegan straightedge alive in SLC. “Nobody’s free until every cage is empty!” yelled lead singer Dravin Fackrell before they pummeled into their set. PXR burned like a short fuse on an atom bomb.It didn’t take long for them to get through their set, which was around 13 minutes, but they left behind an essence of destruction. There was so much thrashing and bashing going on, I literally felt the wall bend from the other side as a result of people slamming into it. I thought the floor was going to cave in from the numerous punches and heels digging in.

It didn’t take long for Establish to set up (three of the four members are the guys from PXR, but with their instruments swapped) for their final performance. Much like PXR, their set was under 15 minutes without a wasted second. Zaina Abujebarah jolted from side to side, snarling with ferocity as Establish trudged through their four-song set, complete with mic grabs and pile-ups from the audience. On their last song, “Babydoll,” Joselyn Pust (In Unison) took over the mic for the last lyrics and screamed with Abujebarah, “I’m not a piece of meat!” Establish are a band I’m going to miss terribly. It seems only a short time ago that they were playing their first show and now, before they could name all of their songs, have called it quits. It is an unfortunate, common occurrence—most hardcore bands are powerful yet fleeting. I guess some bands aren’t meant to be together, and the members of Establish are still young and either have, or will have, more projects in the future.

But wait, there’s more! Coincidentally, the members of In Unison, as the universe would have it, were all in attendance at the show and at some point decided to do a surprise performance to make up for the holdouts. After a few mic checks, In Unison charged through their set and finished off the night. However, some crowd members weren’t satisfied: “Play the fucking cover!” yelled Fackrell, referring to the song “Kersed” by Ceremony that In Unison had become known for playing. After some coercion, the crowd got them to play the minute-long cover and met them with synchronized yells. Even after that, it still wasn’t enough—the crowd jostled for In Unison to play it again, because some audience members had to be sure to get their mic time in. They complied and repeated the song, but were still met with requests to do it again. They went through with the third round with just Martin Theisen playing the bassline while everyone else screamed the lyrics, “Pack your fists full of hate / Take a swing at the world!” You don’t get stuff like that at This is Hardcore. It was hilarious!

A serious shoutout is in order for Pust, Theisen, Ben Greenwalt and Hunter Franks of In Unison for hopping on the show at, literally, the last minute. They made the show a lot more memorable despite the circumstances.

“Hey, we’re LSDO, we’re one of the only punk bands on this comp,” said Chris Marietta (vocals/guitar). “We don’t sound very hardcore—we sound more like a band that doesn’t practice a lot.” LSDO had to be the most out-of-place band on the lineup of the final release show for the Utah Comp. as they brought everyone back in time to Warped Tour ’96 with their skate punk music. It was a fun way to start off the night, which was set up mostly for the metallic, intensity that followed LSDO’s simple three-part harmonies and laid-back vibe. However, certain levels of discomfort are needed for shows like this.

Hero Double Zero took things into a more bizarre direction with their stylized metalcore sound. These guys bring me back to bands like Chiodos, Every Time I Die and The Devil Wears Prada, in that their sound consists of some fairly complex rhythms, guitar parts so technical that they feel more like leads than riffs, and lyrics that are so profound and have deep meanings below their surface. All of which are presented with the funniest and most bizarre song titles. I had to say it was hilarious when singer Michael Aaronian introduced a song as follows: “This is our song that we did for the comp., and this song means a lot to me. It’s called ‘Infested by Llamas’!” It goes to show how much attention you can get if you present something with humor upfront. So far, I could tell this was going to be the mellowest of all the comp. release shows—it was in a 21-plus space and most of the audience was content with just standing around with their beers and watching the bands. Maybe it’s my bias to see the intensity of the audience match that of the music, but there really wasn’t enough people in attendance who were willing and able to bring it to fruition.

While not necessarily a heavy band in terms of tone, Seven Daggers’ sound consists of unpredictable sequences held together with almost jazz-like rhythms that give their songs a sense of urgency. Ironically, they were the band that brought out some slam dancers during their set, even if the pit consisted of three people bouncing off of each other for about 30 seconds. While their music was a marathon of controlled chaos, it’s presented with such grace and flow that I didn’t care where it was taking me. On top of all the precision and groove, Anthony Davis was belting out some powerful, primal yells that were such a stark contrast to the music but still somehow fit their style. They were definitely the most interesting band to hear.

The Metro was playing the Utah Underground Compilation as the bumper music between sets, and I couldn’t help but laugh when Hemwick did their soundcheck while their song “Bloodmoon” was playing over the P.A. and, funny enough, that’s the song they opened their set with. Hemwick are one of the most innovative bands in the metal scene right now, not just for composing entirely instrumental songs with great technical skill, but also doing it in a way that doesn’t come off as boring, pretentious, experimental trite. It can be difficult to have heavy instrumental music be interesting, but Hemwick make it a genuine experience with well-paced structure and dynamics in all the right places. They have such a larger-than-life sound, and it really carries over into their live set—they were great at building up the intensity in their quieter segments and reveled in their chaotic dissonance. On top of it all, it was a lot of fun to watch each member, especially drummer Riachle Child, shift into different rhythmic segments on a dime.

EXES took the stage through a layer of fog so thick they appeared as silhouettes. The intensity built with each second as feedback pulsated from their amps and, without a word, they slammed right into their onslaught of pummeling riffs that kept heads banging and the devil horns thrusting. If you don’t believe me when I say that this band transcends genres, experience them live and watch each member. They come from different backgrounds of punk, hardcore, metalcore, black metal and thrash, and it all resonates in their execution. Phil White’s guttural screams match the band’s shifting propulsion from thrashing blast beats with discordant melodies to disheveled, meaty riffs that could reduce an entire city to ashes. When their 29-minute set drew to a close, I met with audience members who were left speechless after witnessing such metallic propulsion. I couldn’t think of a better band to end the Utah Underground Comp. release shows than EXES. They are band that still garners new listeners and have a sound that pulls from all realms of heavy music.

Something interesting about this show was that with each band, it seemed that another layer of technical skill had been added. It started with the very cut-and-dry three-chord progressions of LSDO, then coursed into the rigid complexity of Hero Double Zero. Then, Seven Daggers traded off muscle for technique as their erratic groove kept everyone on their toes. Hemwick brought it right to the edge of the abyss in their progressive artistry, but EXES managed to pull it back just enough to a level of solidarity. After the show, I sat back and talked with organizer of the compilation and the shows, Sean Dugger and I could tell he was genuinely relieved yet satisfied with the conclusion of this project. What began as a Facebook post brought the underground community together to reach a common goal and resulted in a compilation CD and four shows to back it up. I’m truly thankful that I could experience it all firsthand, and I can’t wait for what’s next.