Eighteen years ago, when I first moved to Salt Lake City, I was immediately introduced to and accepted by the Goth community (more specifically, those that referred to the small, Sugar House club called Confetti, as home). 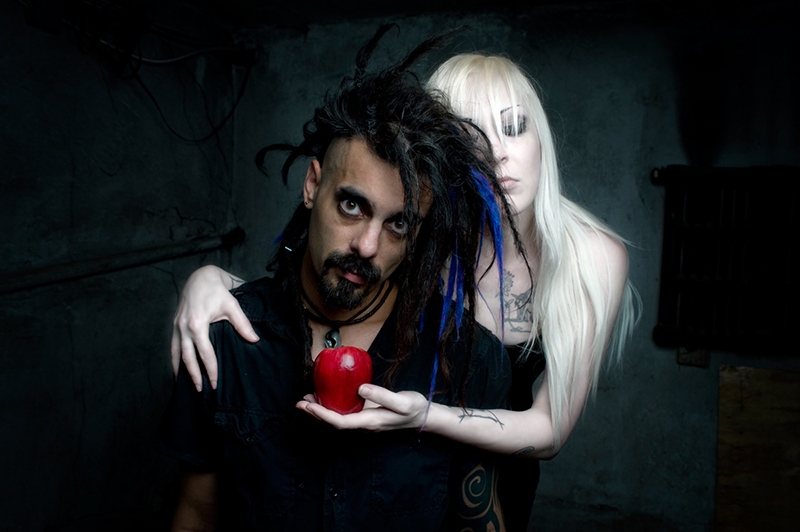 Ego Likeness opened up the show with some eclectic gothy weirdness. Photo: Kyle Cassidy
Eighteen years ago, when I first moved to Salt Lake City, I was immediately introduced to and accepted by the Goth community (more specifically, those that referred to the small, Sugar House club called Confetti, as home). They completely accepted my idiosyncrasies and who I was. The three years prior were spent in ultra-conservative Rock Springs, Wyoming, where I had been tormented, at times, for being the “freak.”
A little disclosure before I continue: try as I might, it’s hard not to make this a nostalgic piece—to some degree—considering that a large group of those in attendance to see Aurelio Voltaire at Area 51 this evening, used to go to that club so long ago; this coupled with the fact that the mood, atmosphere, and musical content (with Voltaire’s set based in booze and sexual references … something familiar with most ‘Fetti kids) had all the elements to make it feel as if it truly were 1997 … well, except for the fact that I wasn’t scoring acid from Shadow in the parking lot. But more so than that, this show was an example of what was so great about that time, place, and people—the feeling of family… but more on that later.
The night began with Ego Likeness. I had been speaking to some of those in attendance and found that there was a large number of people there who went specifically to see this band. My curiosity was immediately piqued, as it’s rare to see an opening act with such a following. After the end of their first song, I got what the big deal was.
Ego Likeness really encompasses a lot of the elements I thoroughly enjoy about industrial/electronica/metal—great rhythms with dark electronica elements (think a cross between My Life With The Thrill Kill Kult and Lords Of Acid, minus the sex), metal guitars (in the realm of, at times, a Middle-Eastern influenced Pretty Hate Machine–era Nine Inch Nails) and incredible vocals provided by Donna Lynch. Considering I spent most of the next morning streaming this band, I can attest to the power to draw one in that their music has.
The one thing that I did notice, especially after listening to their recordings, is that her voice, live, was in a lower registry. This made sense as she said that everyone in the band had gotten sick earlier in the week, and she had gone to the E.R. two days prior due to losing her voice entirely (yet her performance was nearly flawless). The entire band—guitarist Steven Archer, and electronic drummer Mike K. Johnson—were incredibly solid and extremely lively, especially when performing tracks off of their upcoming album “When The Wolves Return.” I felt that the songs “Leave A Light On, Thomas,” and “New Legion,” both from that release, were definite strong points. This is a band I hope to catch on tour in the future.
Voltaire, playing his trademark “dark-cabaret-meets-pirate-goth” style (equipped with only his guitar and no backing band), had one of the most overtly-sexual (with songs about hentai and incest with “granny,”), over-the-top perverse (necrophilia/leprosy sex), and offensive to almost everyone I can think of (including living AND dead) shows one will ever see … But it is a total blast! His is one of the funnest performances I have ever seen.
He informed the audience that he typically has a bottle of rum next to his feet, and every time he forgets the lyrics, he would take a drink. Because of Utah laws, he couldn’t have a drink on stage. So he said he would kiss someone from the front row if he made an error. Next song in, he did. He ended up kissing a very bearded, bald man on the lips for his penance. It was awesome. He ended up, by the ending of the evening, having to kiss three of four people. It was always a blast to see it take place.
He played crowd favorites like “To The Bottom Of The Sea,” and “Brains!” during which he got an offer for a threesome with two gentlemen after the show. To which he responded, “Sure.” He then stopped the song and had to remind the audience that there’s nothing like talking about threesomes during the “kids song,” this was followed by much laughter from the nearly sold-out crowd.
But what really got to me was the banter before going into the song “Raised By Bats.” He spoke of how, at age 17, he got bullied and called a “faggot” by those he called “ultra-conservative” for being into art, music and the things he loved. After he ran away from home, he moved to New York City, and became suddenly interesting to the people there, and found those he called his “family.” He stopped the show to have everyone look around and soak in the fact that there are like-minded people here (some of which he had join him on stage as the “Salt Lake Chapter of the Beelzebub Philharmonic Choir,” during the last song, “When You’re Evil”), and that we are all a family of people who may be looked at as freaks by society, but that’s OK, because we have each other, and that’s all we need.
It might be a bit cheesy, but to those in attendance that night … it made sense.
Photos: