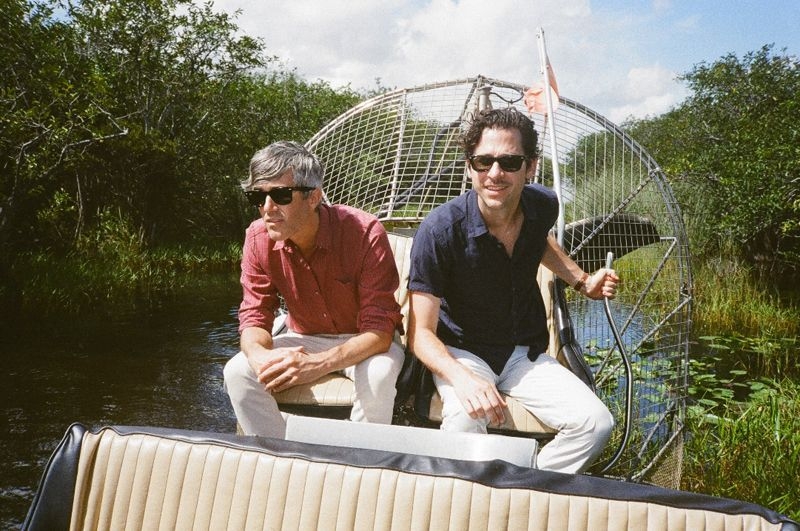 We Are Scientists @ Kilby Court 04.29 with Paws

We Are Scientists played a healthy portion of their new material with sprinkled in tracks from previous albums. Photo: Dan Monick
A band from New York and a band from Scotland got together and played for an audience in Utah recently. This event took place at Kilby Court on Tuesday, April 29 and was the most fun I’ve had in cul-de-sac since grade school. The evening held the last bit of the spring chill, which in turn made the fire pit that much appealing. Yes, in the days before social networks, heat brought people together.The crowd this evening was polite but definitely one of those ‘waiting for their turn to talk’ kind of crowds—not much listening was being done. From what I noticed, everybody did a good job of out ‘cool’ing each other—the rock scene can rest assured that their patrons are properly hip.Grunge music has suffered since its inauguration back in the early ‘90s. Only a handful of bands ever got it right and its imitation since then has cluttered the alt-rock scene like acne on a dirty but beautiful face. Grunge comes from the feeling behind the notes, not just playing them. It’s an ice cream truck on a rainy day. It’s has that surge of whimsy that comes from a life spent looking up hill. It’s also happens to be everything about Paws; who were the opening act this evening for We Are Scientists.Paws front man Phillip Taylor is just a pleasure to watch rock out. He, along with bandmates Josh Swinney and Matthew Scott, were not afraid to play instrumental songs and they jammed out a few of their regular tunes along the way. Paws have been compared to The Violent Femmes, but from their album Youth Culture Forever and this show, I’d lean more toward “Nirvana blended with early Social Distortion.” They jumped, kicked and flailed all about during their set, leaving the audience and a certain out of shape SLUG writer, a little tuckered out.

Afterward I hung out with the extremely appreciative and humble Mr. Taylor. As it turns out he was envious of our mountains, the way I was envious of his Scottish hills. We chatted until we heard the thrashings of an electric guitar behind us then everyone gathered toward the stage for the main event.

It was 2008 when I initially crossed paths with We Are Scientists. Paths is actually a loose description, being that I was on a ship in the middle of the ocean when I found out about them. A friend told me, “You have to hear this,” and the metaphorical path was forever intersected (The song was “Tonight” off Brain Thrust Mastery). When they released their fourth album Barbara, We Are Scientists became forever locked into the mainstream.

Now, on this spring Tuesday the New York threesome was rocking their new album TV en Français gently at our Salt Lake door. The first thing that grabs you about We Are Scientists live, aside from the killer tunes, is the hilarious dialogue between singer/guitarist Keith Murray and bassist Chris Cain. At one point they asked the audience for a request and people were yelling, “Banter!” as a preference to an actual song. It had gotten chilly by this point in the evening and the crowd was huddled in close around the band. Their catchy hooks and heavy riffs complemented their intelligent vocals and charismatic presentation.

We Are Scientists played a healthy portion of their new material with sprinkled in tracks from previous albums. “Make it Easy” was a highlight in an evening of highlights, and “I Don’t Bite” got the whole crowd jumping like they didn’t have work the next day. It was surprising how much of the audience new all words to even the random songs. From tall Abercrombie kid to Goth’ed out recluse, they all knew the words. Sadly, in contradiction to this, the one time Murray held the microphone out to the audience, a particularly inebriated fellow just made screaming/gurgling noises. I hope We are Scientists understand that screaming/gurgling man was not a proper reflection of Salt Lake City’s musical prowess. If we like a band we probably know more about them than they do.

At the end of the show, Murray invited everyone to hangout by the fire, and about a third of the crowd did. People exchanged their favorite moments with the band and We Are Scientist were very flattered to be at the end of such adoration. At the end of the evening they thanked everyone that was still there and promised to come back soon. On behalf of SLUG I don’t think I’m going on much of a limb here saying Salt Lake City will hold them to that promise. Thanks for putting on a fantastic show Paws and We Are Scientists. We patiently wait your return.