00:00 / 16:39
Spotify Stitcher
RSS Feed
Share
Link
Embed
It was as packed as maybe I have ever seen inside. Velour actually had to keep a few people out because the show was completely sold out and the venue at capacity. Only minutes into We Are The Strike’s performance, it was easy to see why. 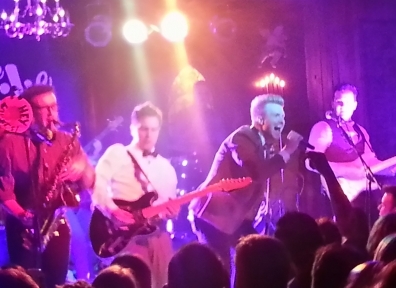 The electricity in We Are The Strike’s performance style is simply something to behold. Photo: Blake Leszczynski

Two lines splitting off from the entrance to Velour, filling the sidewalk in both directions and inside the venue? Yep, already near capacity. This is the sort of thing you have to come to expect on almost any weekend night at Velour, but especially one that features the immensely popular pop-funk outfit We Are The Strike. For a group that is sometimes pegged as a cover band, Saturday’s We Are The Strike show marked the release of their Self-titled five-song EP. I had actually seen them perform before, at a former employer’s Christmas party, but this was the first time I saw them in their true element, with their fans.

Before heading inside, I decided to grab a bite from the taco truck parked just outside of Velour. Despite the fantastic performances inside, this may have been the highlight of my night. Pico Norte Tacos is a truck started by a few Mormon missionaries who went to Mexico, and went back a number of times to perfect the recipes that they came to love while serving. Perfect them they did. I tried their La Campechana tacos (spiced pork and carne asada) and my god, they were incredible. Everything about them—amazing. Best of all, cheap! Six bucks got me three tacos and a bottle of Coke. Big shout out to Rick, Mike, and Anthony at Pico Norte!

When finally inside, I struggled to find a good place to set up to take the show in. It was as packed as maybe I have ever seen inside. Velour actually had to keep a few people out because the show was completely sold out and the venue at capacity. Only minutes into We Are The Strike’s performance, it was easy to see why.

But first, opening up the evening’s festivities was SLC’s own YouTube stars, Scott & Brendo. Honestly, I’d never heard of these guys, but I’m lame, so that’s not surprising. I would describe them as synth-pop hip-hop—or something like that. They made an impression right away, when keyboardist Brendan Bytheway and hype man Christian came out in Storm Trooper masks as frontman Scott Winn launched into their set. The best way I can describe these guys is if Chromeo hooked up with BB Mak’s mothers and upon their birth they were immediately adopted by The Sugarhill Gang. You know what I mean? No? Scott & Brendo wrapped their set up with the ridiculous “Kitten Air," a song about flying kittens I guess. Full marks to these guys, a great performance, made even more impressive with the fact that Winn was performing on a leg he hurt in a car accident a few weeks ago.

Before We Are The Strike came on, Orem-based Aussie actor Tim Cooper came out to introduce them. He was very entertaining in his own right, handing out CDs and T Shirts to people and explaining some Instagram hashtag contest… it doesn’t matter. What matters is Cooper just added to the spectacle of the night and you can actually go see him perform as Marius in the West Valley Hale Center Theatre’s production of Les Miserables.

We Are The Strike hit the stage shortly after a musical introduction by Cooper—first, the band, then, moments later, frontman Chris Crabb. To say Crabb is energetic would be an understatement. He brings everyone in right away with his passion for performing. On their Facebook page, they list their influences as Michael Jackson, Jamiroquai, and Bruno Mars, to name a few, all of them would be appropriate comparisons, but the influence they list that they remind me the most of is definitely Earth, Wind and Fire. The electricity in their performance style is simply something to behold. They mixed in quite a bit of their new stuff in on the set, including the soulful “Get Lost With Me," which saw Mimi Knowles come up and rap a verse. They didn’t go completely away from their cover roots though, doing versions of Def Leppard’s “Pour Some Sugar On Me” (which for me is like a cover on cheat mode) and ending their set with Wild Cherry’s “Play That Funky Music,” which was a definite highlight for me.

The thing that caught me the most was not the music, or the performance, which was great, but how much their fans adore them. Crabb and the rest of the group, suck it in like a life force. They feed on that love and are better the more the crowd is into it, which made for a mighty impressive night.