00:00 / 16:39
Spotify Stitcher
RSS Feed
Share
Link
Embed
I left feeling relaxed and emotionally renewed. I can’t remember the last time I felt so many different feelings over such a short amount of time, and I can’t think of any other situation where I would actually be happy about experiencing such a vast array of emotions. All I have to say is this: William Fitzsimmons will make you experience complex feelings you didn’t even know existed, and I mean that in the best possible way. 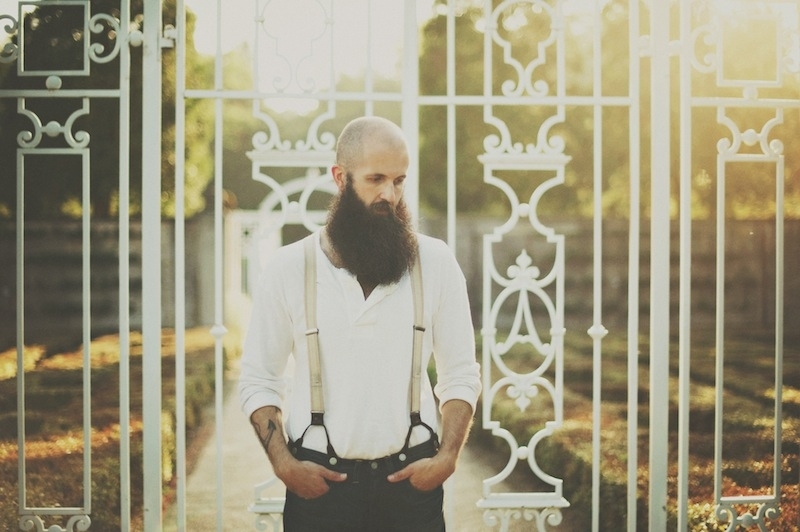 “The key for me is to get to a place of naked, shameful vulnerability—that’s where the best stuff comes from." Photo: Erin Brown
I’ll admit it—I’ve lived in Salt Lake for too long to be able to comfortably say that I’ve never been to The State Room until now. It’s sad, and there’s really no excuse, but the fact is that this show was the first time I went to the venue, and I have to say, I’m pretty impressed. Lewis Bros. had their truck parked right outside the front door, so anyone could grab a snack before the show. Inside, the beer and liquor was flowing, the staff was super friendly and everyone seemed to be enjoying themselves, without being drunk and/or annoying. But my favorite part about the venue is that they have seats, benches and tables so someone who is as shrimpy and small as I am actually has a chance to see the band without having to jump up and down, duck under people or avoid errant elbows to the face. I grabbed a beer and a seat towards the middle, thoroughly enjoying the environment around me. Little did I know my night would continue to get better—I surprisingly spent a good portion of it laughing as well as enjoying the mellow vibes.

To further contribute to my increasingly pleasant night, Ben Sollee appeared on stage right on time, cello in hand. However, it was quickly apparent that every orthodox thought I’d ever had about cellists was about to be challenged. Sollee describes himself as a Kentucky cellist, meaning he combines Appalachian musical culture with the classical cello. The result was like something I’ve never seen—a singing folk cellist with a flair for comedy. Mostly opting to use his fingers as opposed to a bow, plucking and strumming the cello as if it were a vertical guitar, he created a revolutionary sound without taking himself too seriously. In between songs he detailed his horrified awkwardness at hearing his song—with his parents—during an intense sex scene on Weeds, opening an improv cello video message service booth in Salt Lake among other random anecdotes that lightened the mood after listening to such heart-wrenching songs. By the time he was done, the tone had been set for the rest night as being full of serious songs accompanied by humorous front men. Unexpectedly, William Fitzsimmons’ set followed suit.

After a surprisingly short change, Williams Fitzsimmons quietly appeared on stage, his epic beard being the focus of the crowd. Without saying a word, he started into what would be a 2+hour set. He didn’t acknowledge us until he finished his second song. He then apologized for being away from Salt Lake for so long, explained that he was busy being a full-time dad. He also said that he would try to play a combination of songs from his older albums in an attempt to accommodate everyone. He then explained the meaning behind “Josie’s Song” (it’s about his oldest adopted daughter), then seamlessly and gently transitioned into playing it. Most of the set was structured this way, however Fitzsimmons took frequent breaks to make fun of himself (sometimes quite depreciatively) and often joked about how his music is so depressing. While describing his sound, he somehow got distracted and sang a short song about boners, then immediately reverted back to a more serious tone. After I got over the initial shock of hearing a serious musician improv a boner tune, I realized that Fitzsimmons was going to intentionally make us laugh to lighten the mood.

At one point he even played a verse of Rihanna’s “Umbrella” and an instrumental version of Nirvana’s “Smells Like Teen Spirit”—although I have to admit I was disappointed that he didn’t incorporate his self-described “William Fitzsimmons sound” into it, I would’ve loved to hear his soft, relaxed voice attempt to recreate Kurt Cobain’s raspy voice. He informed the audience that the covers were needed as a “palate cleanser” of sorts, so no one gets too sad, bored, sleepy, etc. of which the crowd was definitely appreciative. It broke us out of the trance we were in and allowed for a refreshed perspective and appreciation for the last part of the set.

When everyone regrouped on stage for the encore, they all stood on one corner of the stage with an antique microphone in front of them and performed with only acoustic guitars, a mini banjo and a tambourine —parts of it were a cappella and perfectly harmonized. After three songs, Fitzsimmons even started taking requests to make sure everyone got to hear their favorite songs, which I think is a pretty thoughtful and selfless quality in an artist and definitely something that you don’t often see.

Although the extremely long set was exhausting at times (both aurally and emotionally), I left feeling relaxed and emotionally renewed. I can’t remember the last time I felt so many different feelings over such a short amount of time, and I can’t think of any other situation where I would actually be happy about experiencing such a vast array of emotions. All I have to say is this: William Fitzsimmons will make you experience complex feelings you didn’t even know existed, and I mean that in the best possible way.