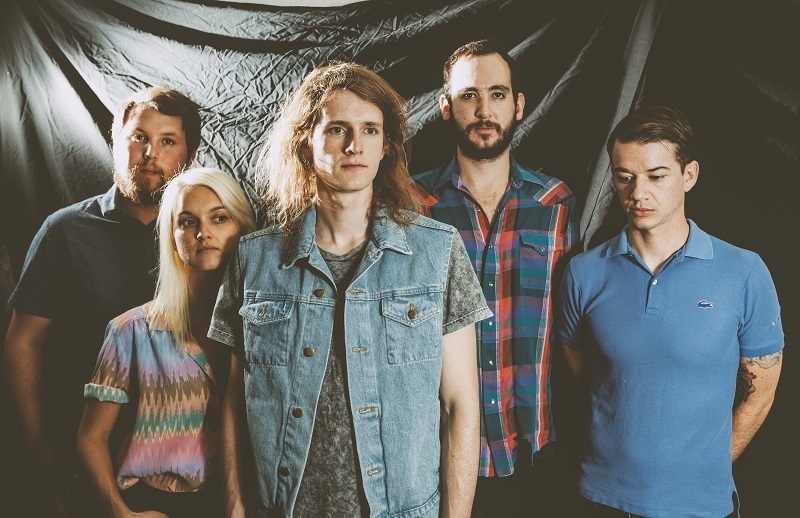 Young Tongue has been touring with mr. Gnome in support of their new album, Death Rattle.

After a particularly long Wednesday at work full of holiday blah blah blah, I was welcomed into Urban Lounge by the lovely, warm voice of Lyndsi Austin from local trio Big Wild Wings. They sound like a cross between Lisa Hannigan and Regina Spektor and were a welcome change to what I’ve seen at Urban this past year. Be sure to check out their debut album, Speaking in Cursive, released earlier this month.

Next up, Austin-based Young Tongue take the stage to perform a lengthy soundcheck as the room starts to fill in a bit more. Their diverse sound ranges from post grunge to noise rock and progressive rock. I can very easily detect Television and Pixies influences in their guitars—as well as a strong nod to Sonic Youth in frontman Stu Baker’s vocal style—all backed by a disjointed percussion comparable, oddly enough, to Stephen Perkins from Jane’s Addiction. Young Tongue has been touring with mr. Gnome to celebrate their debut release of Death Rattle, released in early November, while keeping an adorable time capsule with submissions from fans from every city to commemorate their tour. They have an amazing energy on stage. Vocalist and keyboardist Liz Baker hops around the tiny stage with a huge smile. In between songs, she expresses appreciation and gratitude for the crowd. After their set, an exhausted but excited Liz returns to the merch booth to peddle her wares to pleased fans, who line up to purchase their new favorite album. Something I really appreciated was watching Liz shake the hand of every person who approached the merch booth.

Nicole Barille and Sam Meister of mr. Gnome take the stage and, with very little sound check or fuss, blast through an intro directly into a slightly faster version of “Night of the Crickets” than the last time I saw them in March of this year. They turn this seemingly frail song into something that gives the dramatic lyrics a much different meaning. Barille gives a subdued “thank you” and Sam starts the opening percussion to “Plastic Shadow” at near breakneck speed, as the two race each other flawlessly through the song. I swear, every time I see this band, they get faster than the last time I saw them. Maybe they enjoy watching people dance awkwardly to their complex tempo changes and breaks as much as I do.

I reposition myself as they begin the happy and playful croon of “Rise and Shine,” the first single of their new album The Heart of a Dark Star, released Nov. 11. Barille and Meister completely self-recorded Dark Star at their home studio in Cleveland and there is a blatant difference in the overall feel of this album. It has a much lighter overtone in contrast to the dark lyrical of some of their previous albums.

“Don’t need nothing but my shotgun in my hand” howls out over the audience as the already fast paced “outsiders” starts at machine gun speed, as does the subsequent “Wolf Girls” from Tastes Like Magic.

Finally, another song from Dark Star arrives—“Light” really represents the contrast between what I felt this album was and their previous releases—a transition from dark to light. “Will you be my light, sitting on the dark side of it all?” This gentle interruption jolts the crowd, having gone from a chaotic polka beat to a sweet, gentle song. I really wish they had played the album in its entirety. The lyrics flow between tracks and stitch together a beautiful story of darkness and light, loneliness and togetherness and love.

Next, I move closer to the stage for another string of my favorite songs, “Vampire.” I’m now the idiot hopping around, losing my beanie as I’m blasted back from the stage by the always epic “House of Circles.” Finally, they closed the night with “Pirates”—a song that can be breathy and sweet, while bursting with anger—moving you through a series of powerful emotions, suspending you there in your most frail state, then slashing your chest with an axe—only to stitch it up and do it again in under three minutes. They didn’t leave their freshly disemboweled audience too wounded, though, after wrapping everyone in the warm blanket that is “Follow” from Dark Star—I mean, the chorus alone is enough to put you back together “I love you, I love you, I love you for all time…”

I was really hoping to hear more from the new album this go around, especially since it was just released, but I say go pick yourself up a copy—preferably on vinyl—and drink some tea or something.