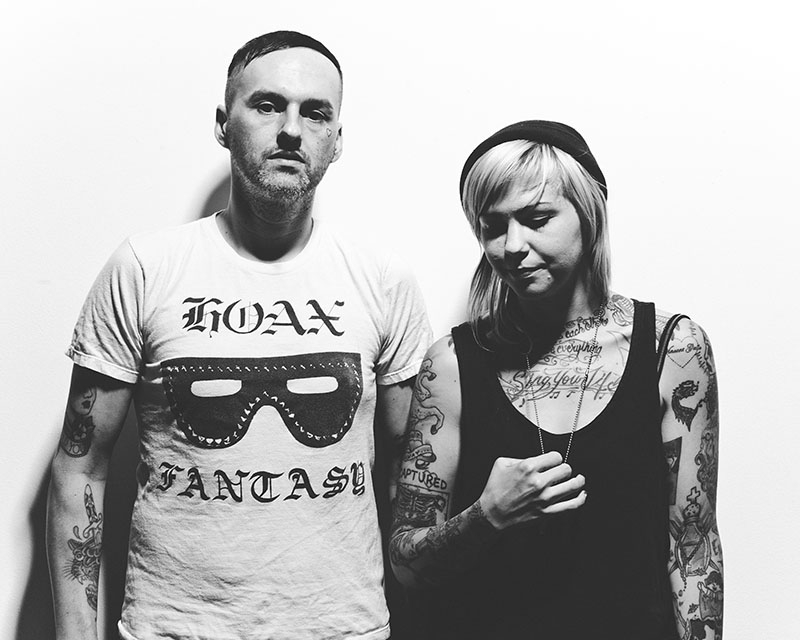 Youth Code
Last Friday, L.A.-based industrial duo Youth Code and avant-punk band Coming, both fresh off of a stint supporting AFI on a cross-country tour, played passionate, frenetic sets with a small audience at The Shred Shed. Across town, hardcore bands Touche Amore and Seahaven drew a bigger crowd at In the Venue, but the small group here showed no signs of dismay. Local bands Baby Gurl, Null and The Pelicant’s opened.

Pelicant’s began the night with their self-described “progressive rock / jazz fusion” to only a handful of people. It’s not my scene—so I won’t criticize, though I wonder if bands more similar to the headliners would’ve drawn a larger crowd. Aside from the indifference I fell toward this kind of instrumental anti-pop, the musicianship is remarkable. Here’s to hoping these kids stick it out and keep playing music.

Next was Null, who, of the three locals, fit in most comfortably with Youth Code and Coming. I was wary of the Linkin’ Park style rap /rock vibe I got off their first song, and the George Carlin anti-government libertarian recording shtick they played as banter in between songs, but the sincere anti-capitalist lyrics sung by Tyler Lusk won me over: “No Racism, No Sexism, No Classism”—I absolutely agree—“Smash Capitalism”—kinda-sorta agree.

Baby Gurl, last of the evening’s locals, rallied the small audience with their goofball-infused set of hardcore rock n’ roll tunes. The duo—Jordan Fairbanks (drums, vocals) and Chris Wadsworth (bass, vocals)—captivated the audience with their oddball humor (trying to entertain each other with grunts and odd noises) interspersed throughout the set—which included fan favorite “Tuna In The Key Of Pussy.” Their mix of genuine charm and sludge-heavy tunes was a welcome opening for the industrial noise of Coming and Youth Code that followed.

L.A.-based outfit Coming followed with a spectacular set of abrasive post-punk. Singer Dustin Hollenbeck leaped into the audience almost as soon as the band’s snarling noise arose out of the minimal setup on The Shred Shed’s stage. Drummer AJ English and bassist William Hedgecock held steadfast throughout the oblivion of noise, as Hollenbeck growled through the tunes off of their recent EPs. Though there were a handful of dedicated Coming cultists in tow, the rest of the crowd seemed a bit hesitant to participate in the thrall at first. As the set went on, though, Hollenbeck was able to unite those in attendance in their frenzy of no wave feedback.

Industrial duo Youth Code finished the night with an equally strong set of harsh EBM and frenzied performance. The duo—L.A. couple Sarah Taylor and Ryan William George—energized the crowd that stuck around with tracks from their debut LP, released last fall on Dais Records. Their set was fast, energetic and frenetic—a throbbing assault of modular and analog synthesis complemented by Taylor’s distressed, in-your-face vocals. Without spending time to banter, Taylor and George gave us a barrage of jarring electronics, verging always towards the harsh noise of the industrial spectrum. Taylor was back and forth between the stage and the audience, at times on her knees nearly screaming into the floor, while George deftly handled their array of synths. Bursting into “No Animal Escapes,” George dedicated it to vegetarians and vegans in the audience. The set ended in a magnificent cacophony of noise, with the audience’s primal urge for noise satisfied. I only hope that Youth Code weren’t disheartened by the meager turnout—because the musical landscape of Salt Lake City is ripe for another visit.