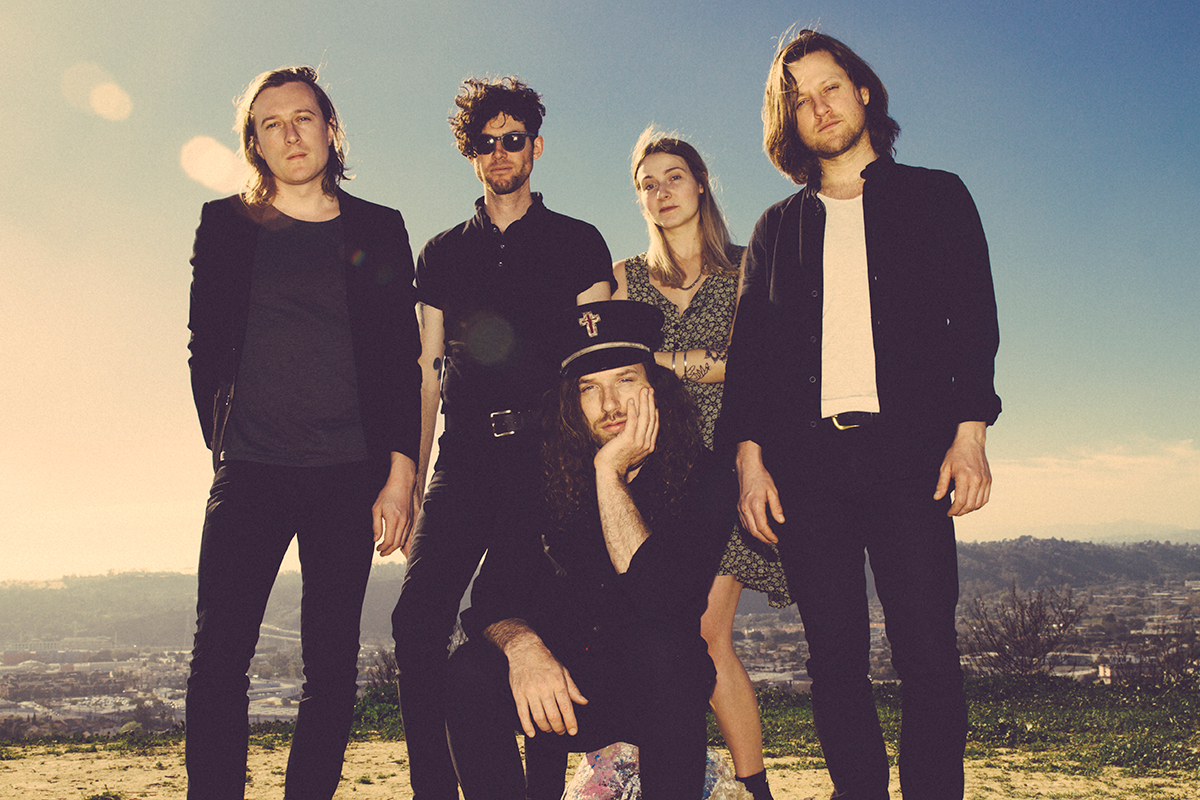 After initially and mistakenly barging my way in during Yukon Blonde’s soundcheck, everyone funneled into the garage. I’ve been to a lot of Kilby shows, and even before the music had started, I knew this show was going to be a bit different than my previous experiences. Pasted across the walls behind the stage were giant paper mushrooms and a silver moon. Off to the side of the stage sat a silly-looking monster made out of papier-mâché and long, dangling, silver tubes. At the time I wasn’t entirely sure what to make of all of this, but I later found out that the set had travelled around with CHAPPO and was a fairly normal addition to the type of show they like to put on. Surrounded by a young, hip, even nerdy crowd, I was ready for the action to begin.

And it began. Oh boy, it began. Yukon Blonde started the night off in a big way—a healthy five-piece group with five vocal mics. I was a little dubious about this latter piece of information, as I tend to dislike lots of singing, but by the first chorus section of the night, my attitude was put at ease. An intensely psychedelic, dancy, rapturous series of sounds filled the air. In fact, the sound was so full that the air around me seemed to vibrate, and the hairs on my arms and legs began to dance. It didn’t take long for the rest of the crowd to start dancing as well, and by the time the drummer played a quick transition into the band’s second song, everyone was smiling and bouncing with the beat.

“Saturday night on the town,” sang Jeff Innes, not far into the set. While it was actually Tuesday night, I didn’t feel like correcting him, and for all the energy in the room, it sure felt like a Saturday night. Yukon Blonde played hit after hit, each song better than the one before, and even the first one was amazing. The crowd was grooving out, the band was grooving the fuck out, and every sound was fresh, tight and fat.

Three keyboards were split between a keyboardist and the lead singer, and added layers of droney pads to the ensemble, as well as some fun, sparkly sounds on the top end of the frequency spectrum. With lush bass lines out of James Younger, driving drumbeats from a supportive Graham Jones and plenty of reverb throughout, Yukon Blonde created a thick, punchy, feel-good vibe that stuck with the crowd even after their final song ended.

“It was kinda like a mix between Neon Trees, and Tame Impala, if Neon Trees weren’t shit,” I told my girlfriend as we returned to the courtyard to wait for the band switch. Indeed, I had been having a hard time putting my finger on what band Yukon Blonde kept reminding me of. When they had three or four players singing during their choruses, Jim James would come to mind, but when lead guitarist Brandon Scott threw down some heavy solos, I was hearing the crispness of The Strokes mixed with the craziness of Pond and all of it bouncing and begging the crowd to dance. The mood was already ecstatic when CHAPPO took charge of the stage. One of my favorite things to see between musicians is gear-sharing, and sure enough, the same blue drum kit sat at the back of the stage for this next act. Four figures now stood on the platform, one of them dressed up as an astronaut, and on the floor in front of each player was an arsenal of effects pedals. Quickly, the astronaut started singing, and the vested guitarist joined him in a short, silly jam that ended with the astronaut suit being stripped off and a fog machine filling the stage with its haze.

A projector at the back of the room started and the back wall became covered in moving stars. Now the stage props began to make sense. The moon that CHAPPO had pasted on the back wall became a canvas for psychedelic patterns and the noodly monster had been positioned to catch the projector’s light and cast its shadow across the stage. Decorations aside, I was quickly pleased to hear that CHAPPO would maintain the dancy style that had been introduced in the first set, while adding their own distinct style.

In place of Jim James on vocals—and, now that I think about it, Jeff Innes did look quite a bit like Jim James—now Alex Chappo was singing. His voice reminded me of Geddy Lee from Rush, which is ironic because Yukon Blonde were the band from Canada tonight, not CHAPPO. Nevertheless, with bass reverberating out of a Moog Little Phatty synth, strong guitar licks and fills patched through a huge effect rack, and simple but strong drumming, you can be certain that CHAPPO sounded fleshed, funky and, overall, fantastic.

All of a sudden, the singer jumped off the stage and started climbing around on one of the building’s supports as he sang. I was impressed that he managed to stay in tune even when he was hanging upside down from the roof, the feathers around his neck and shoulders which had replaced the astronaut suit making him look almost at home there. When he hopped down and started giving hugs to the crowd, he was met by no resistance, and when he began dancing around the crowd the crowd caught on and became much more mobile. Back onstage, Chappo grabbed a sparkly wand and started pointing it at all of us. Not a superstitious man myself, I didn’t really feel the effect of whatever spell he was casting, but when he swung the wand at the climax of one song and confetti flew out of the tip and filled the air, I understood. Similar wands were later handed out to the more expressive members of the crowd, and before long the floor was covered in white ticker tape. Must be a bitch to clean all this up, I thought, but when I asked Chappo about it later, he told me they usually were out of town before they could be forced to do any cleaning.

“This is a song about old souls who aren’t there, but they are there, but they aren’t there,” said Chappo before the band launched into my favorite song of the evening. I was a little confused when Yukon Blonde played first, because I had thought that they were headlining. Now, I didn’t feel like either band was headlining, as each had their own distinct style, both were highly skilled, and I couldn’t possibly choose one band over the other if I were asked to pick a favorite.

Before their last song, Chappo invited everyone to hang out after the show, and the keyboardist told us all that “Yukon Blonde has the good stuff—if you know what I mean.” I didn’t know what he meant, so I asked Brandon Scott after the show, and he fumbled to produce a viable answer. They must be hiding something, I thought to myself, but I couldn’t think of what possibly it could be. After such an amazing concert, though, I was stoked just to get to talk to the bands on such a personal level. Chappo told me about their Mad Magic Summer Tour, which was just now drawing toward its close—after travelling across what seemed like the entire U.S.

Rarely have I been to such a stellar concert, and even more rarely have I been able to chat so freely with every performer afterward. Yukon Blonde and CHAPPO put on one of the strongest shows I’ve ever experienced in the intimate Kilby Court, and now I just want to experience it all over again. Against my better judgment, I passed up on the cat T-shirts that were for sale, but I’ve since added both bands to my library, and I’ve decided to buy two shirts next time either band comes back to SLC.