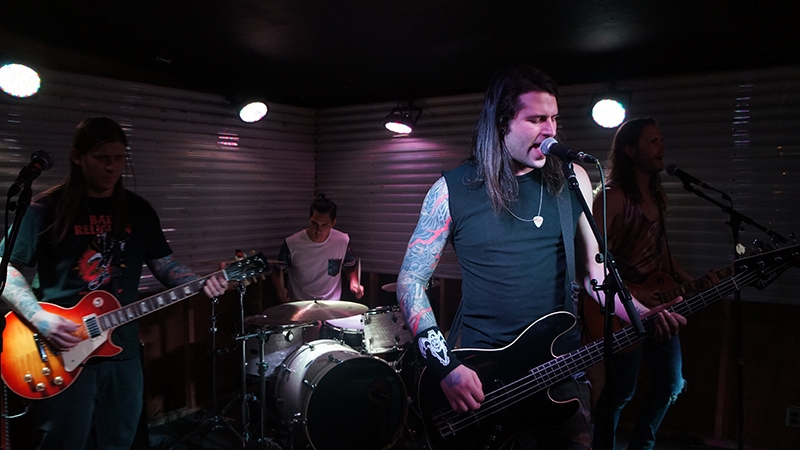 Shows where the primary musical entertainment is provided by bands that have a hardcore or punk sound tend to be some of my favorites. Although I am a fan of both musical styles, I have found in the past that the reason these types of shows hold such a special place in my heart is due to the fact that the energy and overall performances of these groups are usually at the highest levels. The Zombiecock show at Kilby Court was no exception.
First up was CVPITVLS. Hitting the stage with a sound that is a cross between the hardcore elements of Born Against, Hell-O–era GWAR, and a hint of the ’90s heavy alt-rock band Perch, they were firing on all cylinders. What made their set exceptionally entertaining was vocalist Matt Bennett. Constantly moving around the stage with a type of crazed-nervousness, performing with a contorted and pained expression on his face, he definitely kept the crowd mesmerized. His vocals combined screaming and spoken phrases that, at times, were delivered with the same snarky sarcasm used by Henry Rollins. By providing such an amazing musical and visual experience, it was hard to not walk away a fan of this band.
Breaux exemplifies why it’s oftentimes better to rely on original material over covers. Their original material, which combined the hardcore elements of Crowbar with a slight Southern punk-rock feel in the vein of Nashville Pussy, along with a vocal style that reminded me of a scream/hardcore version of Michael Graves, was definitely the highlight of their set. The Graves comparison had not only to do with the tonal quality of vocalist Sam Simpson’s voice, but was also due to the fact that they did a cover of “Saturday Night” by The Misfits … which was the low point of their set. Not only did Simpson get off key at points, but guitarist Greg Wilson got so lost during the second verse, it made the song almost unlistenable. Other than that, the rest of their show was great. With good music being played at a high level, Breaux is a band that puts on something special … as long as they stick with their own material.
Wolf Blitzer came on and forever changed the way that I view extreme music. Over the years I have had the chance to see bands that play some of the most extreme music ever written—1349, Six Feet Under, Mammoth Grinder, etc. After Wolf Blitzer had left the stage, I walked away knowing two things for sure: the first is that there is no way I can make any band comparisons, as Wolf Blitzer’s music is truly original and nothing like anything I’ve ever heard before; the second is that what they play is easily the most musically violent sounds I have ever heard. Combining the rage of grindcore, along with the attitude of early-’90s hardcore, with dissonant chord progressions,and a vocal style that combines a traditional hardcore screaming and death growls, you are now in the ballpark of their art. As much as I’ve waxed poetic about the performances of each band, Wolf Blitzer took the cake. I genuinely thought that, by the end of the set, vocalist Nicholas Finch was going to need medical attention. From song to song, he would leap all around the stage, crawl on the floor, jump off the stage (joining the audience) and scream in the faces of the audience. His best antic was when he jumped at the front of the stage, grabbing the ceiling support beam, hoisted himself up and held himself to the beam with his legs while he proceeded to scream his vocals upside-down. Although vocally he sounded nothing like Stiv Bators, he certainly put his body out there much in the same way that made Bators a frontman legend. I was informed that although this was only their second show, they do have more shows upcoming along with an album they plan on releasing in the net few months. If you are looking for something brutal, violent, and an experience you will never forget, then I insist you check this band out.
Zombiecock is a band I have heard many things about, and was glad to have had the opportunity to see them, especially considering how good they were. These guys really are just a great traditional punk band with well-crafted melodies. The upside to them is that their music is easily accessible—it makes you dance and is filled with sing-along sections. The only downside is that they sometimes allow their influences to prevail more so than maybe they should. The good news is that although pieces of Bad Religion, Social Distortion and Brand New reign proudly in their material, it never gets derivative. It is, however, a blend of music that sounds like something you’ve heard before. But if you love punk and are looking for something that’s got a lot of oomph and that you can sing along with, then this is the band for you.
Overall, the show and all of the bands were great. And if possible, I encourage you to check out any of them the next time they play.
Photos: