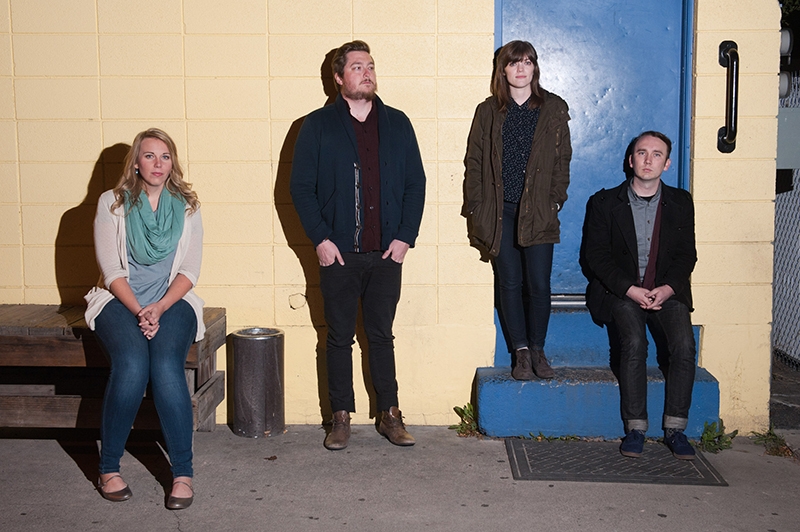 “This kind of started as an accident,” vocalist/guitarist Scott Shepard says. “I used to play in a lot of rock bands. Then I started writing a bunch of sad songs and didn’t really plan on playing them for anybody.” The group gained attention from local music venue Velour, and aquired cellist Ciera Black after an open-mic night. These beginnings quickly snowballed with the addition of percussive master Gavin Ryan and most recent addition Catherine Papworth on piano and vocals. Black says, “I think that it was cool that Scott knew what elements he would ideally like to have in a group when these songs were brand new. It’s cool to see those ideas come to fruition.”

The group unanimously agrees that they strive to make their music and their live shows as close and intimate as possible. “There’s a really emotional quality to the music,” says Papworth. “Scott has a really great way of connecting with the audience. So I just think that no matter what the size of the room is, there’s this dynamic nature of the band. It’s able to pull you in and make you feel like he’s singing to you.” This desire for intimacy doesn’t just extend to their audience—it is something that the group actively strives for among themselves. “Whenever we play live, I always feel like I’m playing in the living room of a friend,” says Black. “Even if it’s a crowd full of people I don’t know, it always feels intimate, and I like that a lot.”

While the group makes familiarity a priority, they don’t settle for anything with a generic feel. “[Our music is] universal, not in the sense of a generic appeal, because I do sing about pretty specific things, but I try to write something that makes me feel something, and hopefully, it will help someone else feel something from that,” says Shepard. “I think one of the things I love about music most is when you really connect with someone at a show or even listening to their record: You feel like either they’re singing what you’re thinking or singing something you felt but couldn’t say. So I think that’s how I approach things.”

“I think I get a lot of influence from books and stories,” says Shepard. “I’m always trying to find a melody that’s suitable to the lyrics. That’s something I’m really big on, making sure the melody and the lyrics are compatible.” Shepard finds inspiration in ordinary, everyday experiences, a feat that only complements their dense, yet unobtrusively beautiful orchestration. “I like [that] the microcosm is one thing making a bigger message. I think the day-to-day stuff is the most interesting because they happen the most,” he says. Musically, the group finds its inspiration in its unified approach in unconsciously creating music that flows through vastly different musical backgrounds. In their more recent work, one may hear hints of jazz, soul and minimalism paired with percussive experimentation sprinkled throughout.

There is an overwhelming amount of love and support in this group. Each member is intent on complimenting one another, and as a group they aim to meet each and every person interested in what they do. Their formula is simple: “Our goal is to keep things intimate and pretty, and to connect with our audience,” says Shepard. “There are a lot bands that hide backstage, and maintain this mystique. To me, it’s not worth it to try and put on a face. So I think that even though there’s narrative in our songs, there’s a lot of me in everything. It’s not about mystique—it’s about connection and being a part of people’s lives,” he says.

As far as future plans go, Book on Tape Worm have ambitious goals in mind for 2015. They’re planning to release an EP in the earlier part of the year and a full-length later in the year. Expect a more cohesive sound, as they are being incredibly selective about what makes the cut. “With the last record, it was ‘Here are these songs. We have them—let’s record them: They’re a record,” and this time, we have the luxury of having quite a few options to choose from,” says Shepard. All this mixed in with a Southwestern tour—these Provo babies have quite a year ahead of them, so see them while you can!

Be sure to make an intimate connection with Book on Tape Worm on Dec. 12 and by checking out their album All the World’s a Stage and their Bandcamp: bookontapeworm.bandcamp.com.