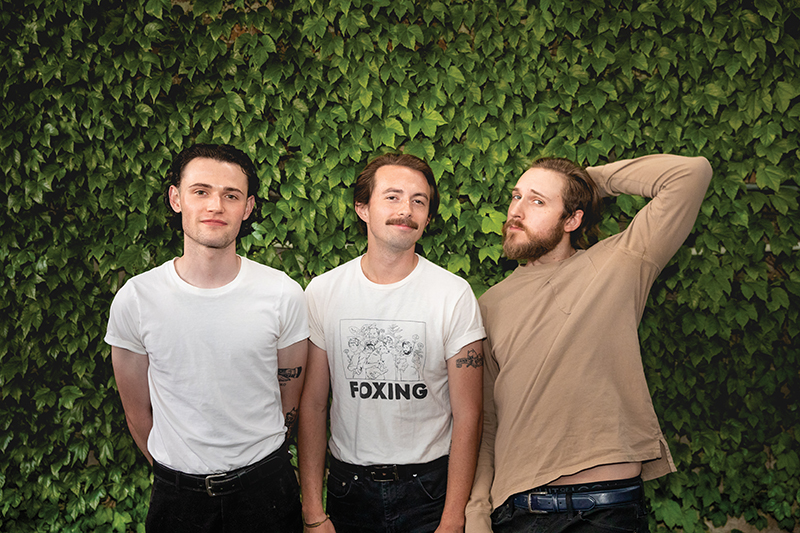 July baby! It’s the thick of summer, and the days are as long as the nights are sweaty. The August dregs are just ahead, so take a night with us to appreciate the season while it still feels this good. This month’s SLUG Localized features performances by The Ugly Boys, Doctor Barber and Josaleigh Pollett, all performing at Urban Lounge on Thursday, July 18 at 8 p.m. for $5 at the door. And as always, SLUG Localized is sponsored by Tito’s Handmade Vodka, High West Distillery, 90.9FM KRCL and Spilt Ink SLC.

From its inception a few years ago to 2019, Doctor Barber has always been the child of Paul Michael Zuniga. The project started solo as a way for Zuniga to attempt to make it as a musician while living in Austin, Texas, but since moving back to Salt Lake he’s recruited best friend Bennett Geilmann and Aaron Michael Hendrix into the band, and though they’ve been dormant a while, the rock group is eager to play their first show together in nearly a year.

Doctor Barber started while Zuniga was living in Austin, Texas. Though it began as a solo project, he wanted his songs to standout in the crowded Austin music scene “where everyone is a singer/songwriter,” Zuniga says. “I had to stand out. I gotta pretend like there’s a band with me already.” Austin was much more of a cutthroat music environment, and finding bands who were legitimately good acts with legitimately good players was difficult. Zuniga didn’t feel like he could sell himself in that environment, and so he wanted to stay away from verse-chorus verse-chorus structure, instead imagining non-existent bandmates playing with him. “It really affected how I wrote,” he says.

“It’s easy to write a song, but it’s hard to write an honest song, to have everything mean something.”

Zuniga ended up moving back to Utah in 2015 and recruiting a friend to play drums. The duo hit the local circuit as Doctor Barber and played several smaller venues. It wasn’t until 2017 that Hendrix approached Zuniga after seeing him perform at Kilby Court. “I thought, ‘Damn, this is sick shit,’” Hendrix says. “And I noticed they didn’t have a bassist. I didn’t actually play bass at the time, but I’m a multi-instrumentalist … They’re awesome musicians and I was willing to learn if it meant being a part [of the band.]” At that point, Zuniga’s friend and then-drummer was more or less on his way out of the project. Zuniga brought on Hendrix and also thought to tap Geilmann to play as drummer. “I’m [Zuniga’s] best friend,” Geilmann says proudly. The two played together in a band in a high school band called Tribes. “It was our first band that we kind of, somewhat took seriously.”

It was like no time had passed. “We just kind of picked it all back up,” Geilmann says. “I just know how [Zuniga] plays. We fit well together. It wasn’t like ‘oh! Paul [Zuniga’s] here!’ We’d been keeping in touch.” As ongoing best friends the two would Facetime and chill—that is, video call each other and listen to Radiohead together.

The band describe themselves as “story-telling rock n roll.” The lyrics and instrumentation are integral and technical. “One of the reasons I wanted to join is because I noticed that [Zuniga] is a really creative songwriter,” Hendrix says. “The songs are centered around stories lyrically, but the progressions and arrangement solidify those stories into a weird, cool third realm. It’s really hard to do that,” Hendrix says. “It’s easy to write a song, but it’s hard to write an honest song, to have everything mean something. Zuniga does that well.”

“Everything I write lyrically happens to me in real life in one way or another.”

For Hendrix this appreciation for Doctor Barber’s style goes back to his musical upbringing. “A lot of older, classic rock stuff and bluegrass—in my opinion really honest music. [Zuniga’s] stuff reminded me of that. It doesn’t feel too structured or planned out. Not every word rhymes perfectly: He’s not trying to please anyone but himself.”

Zuniga admits it’s all pretty personal. “Everything I write lyrically happens to me in real life in one way or another,” he says, “whether it’s somebody just saying something to me or an actual experience that I have.

One song, called “Bells,” recounts when Zuniga met an old partner. “It was about the first time I met her. New Year’s Eve and Radiohead comes on. I was dancing my little heart out when she walks in the room to get her phone. My arm swings back and pops her in the nose, she starts gushing blood. That’s how I met her and we dated three years.” In the song this translates to “Loud bells are ringing in the New Year / I’m covered in Champagne / Someone’s put my jam on / and I’m dying to win over the room / in the dark, grooving hard / I accidentally swung my south paw / pow, lights out.”

Hendrix chimes in. “This is what I’m talking about. The music to that story complements what he’s saying. If being punched in the face were a piece of sound you could put into music, that’s what you’re hearing.” Doctor Barber is not “cool hooks or catchy music” but instead music “in service of storytelling.”

“It only took about 40 minutes before we were back to how things used to feel.”

The group is still in the stage where most songs they play come from Zuniga’s time in Austin, but luckily that process has lent itself well to the group dynamic Doctor Barber now has come into. Still, they’re looking to grow as a group. “We haven’t dipped into writing together yet,” Zuniga admits. That’s for a handful of reasons, some due to Geilmann being busy with school, Hendrix busy with his production and recording work, and Zuniga busy playing in other projects, including playing as a member of Ugly Boys.

So the band is warming up from a period of inactivity—Localized will be their first show in almost a year—but they’ve found rehearsing after time away has been relatively easy. “It only took about 40 minutes before we were back to how things used to feel,” Geilmann says. While he finishes up school,Hendrix works as a sound engineer, and Zuniga puts a lot of focus on Ugly Boys. Sitting with Doctor Barber is incredibly chill. None of the members are trying to force success; they’re having fun. Each exude calm, and more than anything, each seems excited to be hanging out with each other in the moment.