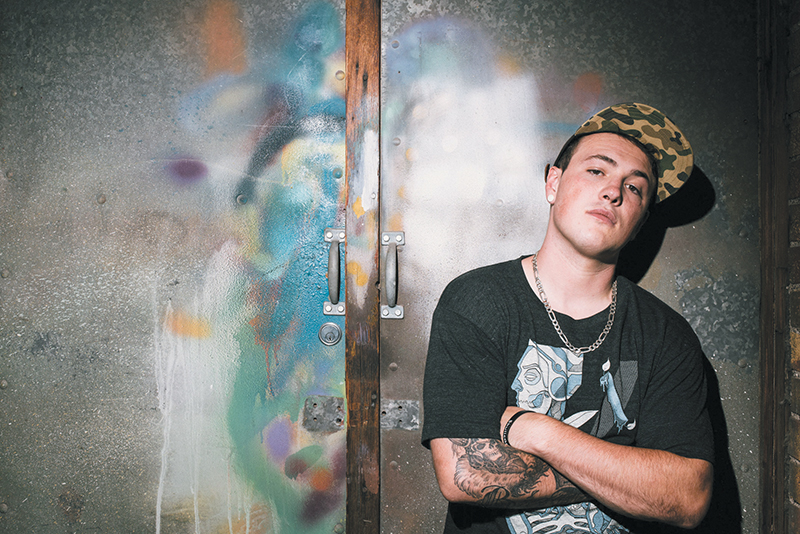 SLUG’s August Localized happens on Aug. 18, and it will be the perfect after-party for the Pusha-T and Digable Planets Twilight Concert Series show. As usual, Localized is free and will take place at Urban Lounge. The show is 21+ and doors open at 9 p.m. Featuring several big names in the local hip-hop scene, the show kicks off with Erasole James of Dine Krew, followed by SLC emcee Dumb Luck and topped off by local producer and DJ Khensu. The event is sponsored by local music supporters Uinta Brewing Co., High West Distillery, KRCL 90.9FM and Spilt Ink SLC. As always, SLUG Localized is a perfect way to support local music, keeping the vibrant culture of Salt Lake City alive and strong.

For artists like Dumb Luck, making music is a multifaceted expression of life and experience. There are no set rules for style, no stipulations nor boundaries that an artist has to fit into. Instead, music is a mirror, a vehicle for expressing one’s own life experience, a way to tell a story. Through the bad times and the good, music will be there for you, as long as you stay open and speak from your heart.

Mark Baker, aka Dumb Luck, is no newbie to the Salt Lake City hip-hop scene. In the seven-odd years he has been making music locally, he has played countless shows and opened for multiple touring artists, including Ice Cube, Sage Francis, Dead Prez and many more. Dumb Luck has played a show or collaborated with many big names in Salt Lake City rap as well: Swell Merchants, Burnell Washburn and Dusk, to name a few. Over the years, he has perfected his craft and has become a veteran of both song construction and freestyling, having participated in several local “Mic Masters” battle events, holding his own and killing it.

Dumb Luck, like many rappers and lovers of hip-hop, was exposed to the genre at an early age and immediately discovered a passion. “The first CD I ever bought was by Jurassic 5,” he said. “I heard the song ‘Quality Control’ and immediately loved it. After that, I kind of just dove in.”

Fast-forward a handful of years, and Dumb Luck has stayed true to his passion. His music is modern-sounding, but there is a hint of old-school hip-hop in his lyrics and flow, which comes from years of studying the masters. When asked who one of his favorite emcees was, he immediately mentioned Black Thought from The Roots because of the  artist’s versatility and ability to command a wide variety of genres and themes in his lyrics.

Dumb Luck has a delivery like Atmosphere, but his music spans a wider variety of styles and lyrics. In many ways, he is like Mac Miller, who has remained versatile and unique for quite some time. Dumb Luck’s chief producer on some of his earlier albums, Linus Stubbs, crafts a healthy mix of old-school and new-school sounds. The bass stays loud and amped, but the hi-hats and samples are more modern, sounding like the producer Ant mixed with Madlib.

“I don’t try to fit a certain standard, style or form,” Dumb Luck says. “When I hear a beat or get something in my head, it comes out as it comes out.” This has been true about his music since Dumb Luck’s first full-length release, Lo-Fi But So Fly, in 2013. There is a realness to the music that is not often heard in hip-hop today. Dumb Luck raps about what he knows and how he feels. Some songs are hyphy and peppy, and other songs take a darker turn, giving the listener a glimpse into what it’s like to be Mark Baker. He is not afraid to explore the depths of sadness, jealousy, pain or guilt.

Unsurprisingly, Dumb Luck’s modern-day influences are artists like J. Cole and Kendrick Lamar, who are known for staying true to who they are, as opposed to trying to hide behind rap personas like many mainstream artists tend to do. “In all the years I was listening to hip-hop, all my favorite rappers said, ‘Be yourself,’” says Dumb Luck. “Be true, and you’ll be okay, and that’s how I’ve tried to remain.”

When asked to describe his own music, Dumb Luck says, “I try to keep a positive, mixed vibe,” which is apparent in his last album, entitled It’s Not Official Yet. With songs like “Grieving” and “Ocean of Madness,” Dumb Luck obviously deals with some more emotional themes and experiences, though he is always able to put a positive light on his darkest songs. “Broken Home” is a longer song that begins with descriptions of a troubled household and an individual who ignores the bad things that are going on around them, but at the end comes into a more positive outlook.Dumb Luck raps, “Keep building the foundations for the children / And follow in the footsteps of people who are brilliant.” The message of positivity and hope, no matter what, is prevalent in all of his works—it’s something that Dumb Luck relies on heavily not only in his music, but also in his life.

Now a big name in the Salt Lake City hip-hop world, Dumb Luck has done very well for himself. He has obvious skills as a rapper and is able to work a crowd with skill and precision. When asked if there was any advice he could give his audience, Dumb Luck says, “Love the ones you got, be yourself, push yourself and enjoy the bad times. They can be just as deep as the good.” If you want to hear positivity and lyricism and get hyped, August Localized will be the place to be. You can find Dumb Luck’s music at dumblucky.bandcamp.com.