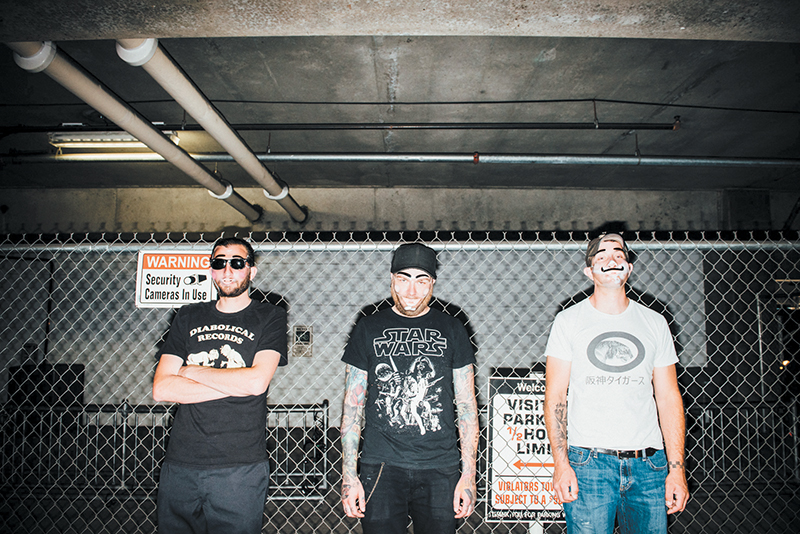 For July’s SLUG Localized showcase, prepare yourself for a plethora of gut-wrenching, spine-tingling, horror-themed punk rock from Salt Lake’s own Zombiecock, joined by metal-tinged hardcore punk from the publically elusive Goatsifter, with support from the pounding, doom metal riffage of Yeti Warlord. If you’re looking to leave the normal world behind, come hang out in a sea of madness where abnormality is king on July 14 at Urban Lounge, sponsored by Uinta Brewing Co., KRCL 90.9 FM and Spilt Ink SLC.

“The Goatsifter is the blue-collar worker in one of the outer rings of Hell, and as the souls come into Hell, he sifts them into their various chutes,” answered Goatsifter’s bassist, only known as Mike The Bass. “He’s near the ethereal combine, adjunct to the thresher. He is our namesake, and his name be praised.” I had asked him the meaning of his band’s ominous moniker, and I have to admit, that is some uniquely dark shit coming from someone who, just minutes before, was quoting lines from The Big Lebowski. However, I guess that’s the best way to consider The Bass and fellow bandmates Robby Petrich and Dave Sanchez (drummer Zach Alvey was unable to make the interview). In between their esoteric humor and cohesive ramblings of subjects ranging from Lemmy to the wardrobe of Little House on the Prairie are some really passionate words that spoke volumes about the band’s attitude toward their music.

Between each member are 16 consecutive years of experience playing in bands in SLC—Petrich played with the street punk devotees in Endless Struggle, while The Bass and Sanchez both played in the punk rock powerhouse Stark Raving Mad. Sanchez and The Bass kept playing music together after the initial breakup of Stark Raving Mad, spending most of their time figuring out what they wanted to sound like and contracting influence from Propaghandi, Butthole Surfers and Smashing Pumpkins as well as heavier acts like Comeback Kid and Nails. They then recruited Petrich as a second guitarist and Alvey on drums, and everything clicked with their full lineup, creating a blend of rapid hardcore punk with a semi-metallic edge in some areas, marinated with raw, shout-based vocals, which The Bass describes as “controlled air.”

Though Goatsifter have been a band for four years, they’ve been very evasive as far as active bands go—The Bass describes themselves as “the Andy DuFresne of punk rock.” After their live debut at Burt’s Tiki Lounge in 2012, they estimate that they have performed only five or six times since then. “There is no need to play once a month if you put your foot down and let people know who the fuck you are,” says Sanchez. “It makes you an anomaly if you play three times a year—it builds the mystique.” It’s evident that Goatsifter are a band who’s not in it for any exposure or any type of income whatsoever—they make it clear that it’s strictly for them and their love of playing music. “If we had any aspirations to go somewhere with this band, we’d be playing every week,” says Petrich. Of course, not having to worry about performing has its advantages, like having more time to create new music and start shaping it.

The band is on the verge of releasing a full-length at some point in the upcoming months with a working title, Real Villains. Keeping with their base of punk rock and hardcore influences, they also drew from outside of the three-chord syndicate—one such song was written by The Bass as a straight-up blues song, and he presented it to Sanchez, who “sifted” it into more punk territory. “I will listen to a lot of music that I don’t play,” says The Bass. “When you’re in a band that plays the same punk rock chord progressions and you listen to a lot of other shit, I think it will come out differently.”

As excited as they are to be releasing new music, they’re still holding onto their mindset of self-satisfaction. “We’d like people to hear it, but if they don’t like it, it’s a nonissue,” says The Bass. “There’s no way to say it without sounding like a pretentious, arrogant asshole, but we’re not going out of our way to make music that suits them.” Sanchez adds, “It’s not for them. As arrogant as it sounds, it is for us, but if it enters through your ears and you like it, then it becomes for you, but the act itself is not for you.” As selfish as it may come off, it is very true—most great art in the world has been done by artists trying to fill their own creative void, and the fact that people like it and can relate to it is an added bonus.

Goatsifter have no set release date for Real Villains yet, but considering that their main focus is playing in their jam space rather than onstage, the wait for the initial release might not be too far. However, more often than not, they won’t turn down a show if offered—you may catch them on a bill with Scary Uncle Steve or Filth Lords. Of course, what is guaranteed is that they will be at the Urban Lounge on July 14 for the always free SLUG Localized showcase with Zombiecock and Yeti Warlord. If your curiosity has been piqued, come check them out—honestly, who knows when you’ll see them next? Be sure to check out their demo as well at goatsifter.bandcamp.com.