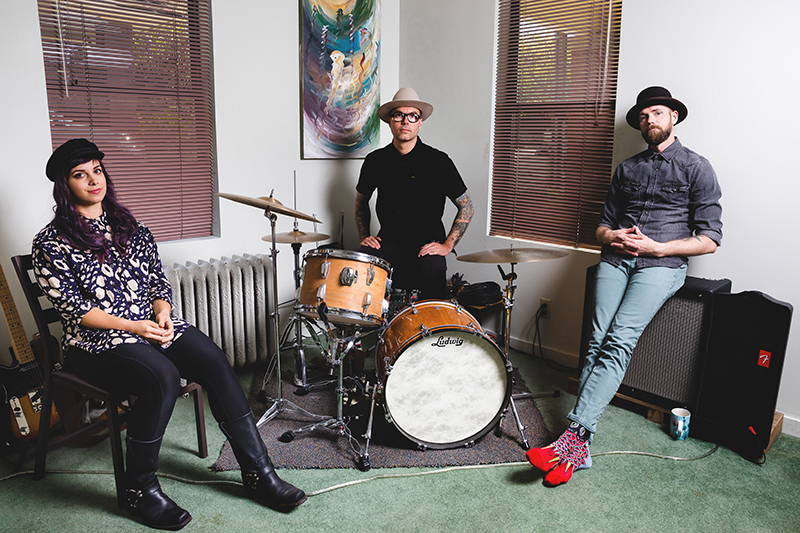 Time-travel through generations of historic and contemporary Americana folk rock in one night at this month’s Localized. Kelli Moyle will kick off the show with her saccharine folk serenades, and the ethereal and electric Johnny Betts will precede the Western-wailing, whiskey-drinking Harold Henry, who will finish off the night. Stop by Urban Lounge on July 13 for the showcase, which is generously and conveniently sponsored by High West Distillery, Uinta Brewing, KRCL 90.9FM and Spilt Ink SLC. This show is 21-plus and free—so what’s your excuse not to?

The trio jokes about classifying themselves as whiskey folk. “We just thought ‘Harold Henry’ sounded like a nice whiskey,” says Darland. Hansen adds, “We have more of a chamber-folk sound because instead of a bass, we use cello.” The resulting sound ranges from folksy to bluesy to experimental. “When you hear the breadth and the depth of what we can offer, you’ll find we can bend your expectations a bit,” says Hansen, which I found to be totally true. I figured that I’d stay for one song during Harold Henry’s band practice, and maybe it was the whiskey, but I was captivated and stayed the entire time. I heard a few songs from their January 2016 self-titled EP and a handful of songs from their anticipated full-length album, Night Sun, projected to release later this summer.

Their new album is courtesy of Johnny Betts, who helped Harold Henry record. After two long days of recording, “We picked the songs we liked best out of what we captured live,” says Darland. The album is “a stream of consciousnesses,” says Darland, and an honest-effort introduction of themselves to listeners via song. Hansen calls this album a “clearing of the cobwebs”: a combination of new and old songs stemming from individual ideas and memories over the years, manifested together. “Now we understand each other,” says Hansen, which has created a trusting, positive space in which the musicians can write and create together.

The band brings a diverse triad of influences. From Old Crow Medicine Show to Nirvana to Wu Tang Clan and everything in between, Hansen is uncertain where his music-listening habits translate into music-making. He generalizes both as being part of “a medium of music that is intergenerationally passed down.” Darland has core influences like Fleetwood Mac, Bob Seger, Junkyard Dog and Nazareth, who were “great melodic bands who just grabbed you,” says Darland, an idea for which Pearson advocates: “I don’t want to be background music,” she says. “I want to enthrall and draw everyone in.” She cites influences like Sarah Balliet, the cellist from Murder By Death, and the desire to “bring intricate classical elements to a song that wouldn’t necessarily call for it.”

Each band member constructs a nuanced version of Harold Henry that remains true to the overarching style. Darland and Hansen often swap spots between drums and guitar, which shifts songs from acoustic to electric, driving their versatility individually and collectively. Hansen plays the drums and wails on the harmonica simultaneously, an admirable and badass talent. “I’ve never seen anyone play drums the way Jeremy does,” says Pearson, as she explains his tendency to rock back and forth like Donkey Kong to keep on tempo. “Seriously, everyone who watches Jeremy play says, ‘Your drummer is fucking awesome.’” Pearson is a classically trained cellist with textbook musical knowledge, born to break the stigma of female cellists. “It’s funny because I used to go to my lessons and hope everyone thought my cello case was a guitar case. But now, I’m like, ‘This is my fucking cello!’” says Pearson. She is riveting and harvests and grounds the Americana tendencies of Harold Henry, driving their sound into the depths of an Old Western scene.

With Darland from Amarillo, Texas, Pearson from Southern California, and Hansen having lived in Los Angeles, the Bay Area and Seattle, Harold Henry see the beauty of Salt Lake’s thriving music scene. Hansen describes Salt Lake City as a “gem of the West” and a “transitory nodal point in the network of music.” Contrary to the bigger cities, “Salt Lake offers a very intimate, personal, communal experience with the music,” says Hansen. Darland speaks to the “affinity for a local community scene” in Salt Lake City that he hasn’t seen other places, but also to the “love and embrace for local artistry, ranging from our Farmers Markets to [the] Craft Lake City [DIY Festival] and the Utah Arts Festival.”

Harold Henry (facebook.com/haroldhenrymusic) seek and contribute to local artistic collaboration. Darland hosts an online Closet Series, where he invites local singer-songwriters, like Michelle Moonshine and Vincent Draper, to discuss their musical journeys over a glass of whiskey and perform a song. Together, the band hosts house shows, nestled in the Avenues, featuring diverse acts and drawing multi-generational crowds—the mission of their music. “We want to draw everyone in,” says Hansen. “Everyone is welcome.” So pour yourself some whiskey and stomp on down to Localized for some inclusive, Americana folk rock.