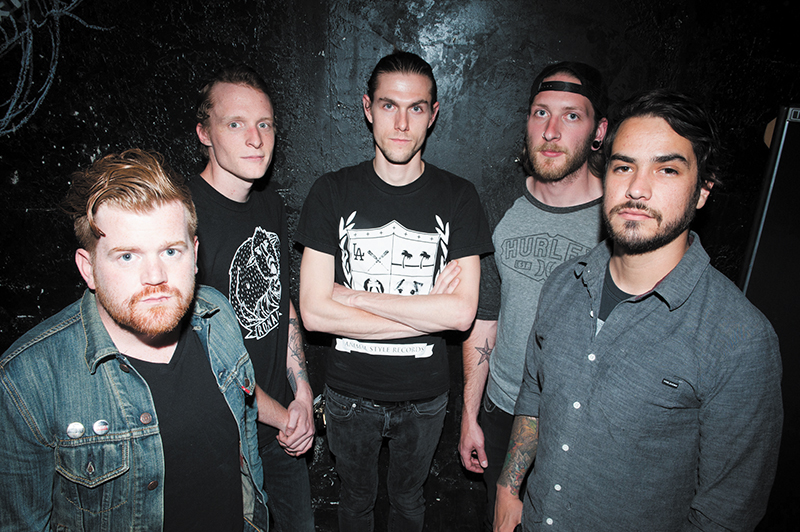 This month’s Localized will feature the heavy-hitting, poetic antics of Sights, followed by the addictive melodies of Larusso and Heartless Breakers headlining the show. If you miss the angsty days of the mid ’00s when Brand New and Taking Back Sunday dominated the airwaves, you better be at Urban Lounge on Thursday, July 16 at 9 p.m.—the show is free and sponsored by Uinta Brewing Co., KRCL 90.9 FM and Spilt Ink SLC.

Heartless Breakers have erupted into the local post-hardcore scene with the release of their first full-length album, The Great Give Back, in March. The product of founding members Chase Griffis (vocals), Matt Mascarenas (guitar) and Bryan Lee (drums), Heartless Breakers have had a changing lineup of local musicians playing live shows and traveling on tour, with friends Sean Jurewicz and Tylor Blackburn currently filling in on guitar and bass, respectively.

Though the creative process for Heartless Breakers is mostly collaborative, Griffis is the sole lyricist, refusing to shy away from intensely personal lyrics and belting them out with honest ferocity. Griffis explains that his lyricism, as well as his own personal experience, have changed since their last EP, Lighter Doses: “I’m not bitching about stuff as much as I did on our EP,” he says. “I’m more like, ‘What can I do to resolve this problem that I’m in?’” Because The Great Give Back is Heartless Breakers’ first full-length album, the band has had the opportunity to experiment with softer yet equally intricate songs such as “Exit” and “An Aching Kind of Groaning”—these songs are just as quintessentially Heartless Breakers as their faster, head-bang inspiring pieces. With the chance to experiment with different styles for the full-length, there is plenty of space for venting—“I’m the kind of guy who keeps stuff in, and I’m glad I have some sort of outlet for it,” says Griffis.

Having just returned from a tour promoting The Great Give Back, the members of Heartless Breakers are dealing with readjusting to the Salt Lake scene from life on the road. “I feel like we’re a lot more comfortable out of town,” Mascarenas says. Playing shows within the tight-knit scene in Salt Lake is intimate, but Heartless Breakers have found freedom in being somewhat anonymous while on the road. They have also found musical soulmates in Phoenix-based punk band Sundressed. “I’ve never felt like I was going through a breakup after a tour but leaving that band was a very big bummer” says Blackburn, but with all things considered, he adds, “I think the most standout moment of the tour was that it ended well.”

Though it seems that the Heartless Breakers prefer touring, they have definitely found their niche locally. “Salt Lake is so nice to us,” says Mascarenas, who played in New York–based Daytrader before moving back to Salt Lake to form Heartless Breakers with Griffis and Lee. “When we play here, it just feels like we’re hanging out with our friends” he says. The band prefers the intimacy of playing smaller local shows where everyone is “drinking beers with friends,” to the formality of being on a stage in front of an established “audience.” The touring members of Heartless Breakers (including Blackburn) have often been friends from different bands and projects along the Wasatch Front. Even the founding members of Heartless Breakers have a stake in different local projects—Griffis and Lee were once part of The Lionelle and Lee is actively involved in other musical endeavors.

However, Heartless Breakers have gained the most notice by signing onto Anaheim-based Animal-Style Records and earning a spot on this year’s Fest in Gainesville, Florida, alongside bands such as Mewithoutyou and Defiance, Ohio, which will take place in late October.

Additionally, their cinematic music video for “Carbon Copy” is demanding a lot of attention. It starts with a rich, dark guitar melody and Griffis’ clean voice creeping in with “Young and starving / pockets empty / abandoned on a doorstep / on a dark Chicago street.” His voice is evocative and emotive, playing to the dynamic, almost brutal nature of Lee’s drumming. The intricacy of the instrumentals is balanced—Heartless Breakers have a good sense of when to highlight Griffis’ lyrical sincerity with slower, suspended moments and when to lay down the heavy instrumentals and turn up the intensity. Since the music video’s release, the band is garnering comparisons to Thursday and At the Drive-In, which they are both flattered and annoyed by. “It’s a cool comparison—it’s what I grew up listening to and still listen to, but now it’s getting fucking annoying,” Griffis says. While Heartless Breakers certainly hold those bands as influences, they insist that they are not trying to emulate any specific sound. “The idea is writing what came naturally, and it makes sense that those bands are included, even though that wasn’t the goal,” says Blackburn.

There is something infectious about the raw honesty and frankness of Heartless Breakers. Though they maintain that they are just a “rock band,” their exhilarating sound attests that they are capable of putting on one hell of a show. Check out The Great Give Back on Heartless Breakers’ Bandcamp page, heartlessbreakers.bandcamp.com and catch them live at Localized on July 16.