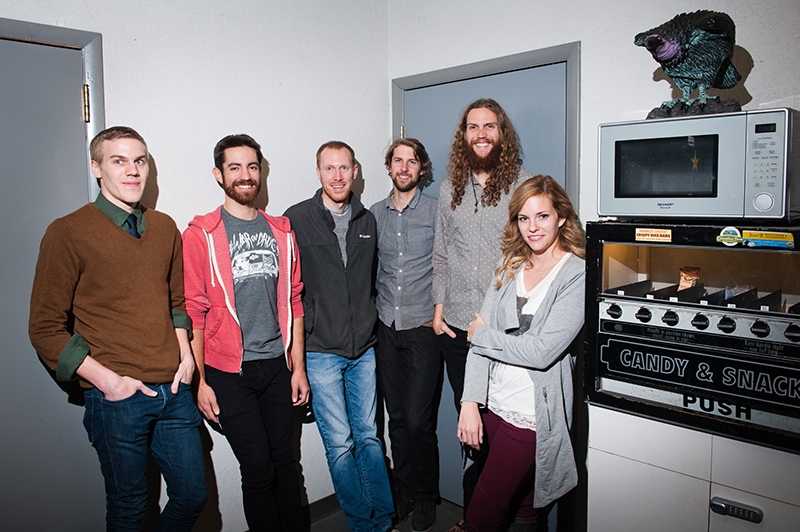 This month’s Localized features a super-sweet holiday treat! Showcasing an uncommon four-band lineup, we’ll be kicking the night off with the twangy post-rock of The Awful Truth, then progressing to the ethereal dream world of Loud Harp. After a short break, we’ll hear the quietly contemplative stylings of Book on Tape Worm and finish out the evening with the pastoral musical experimentation of L’anarchiste. This melding of enchantingly delightful tunes will take place on Dec. 12 at Urban Lounge at 8 p.m., and is sponsored by Uinta Brewing Co., KRCL 90.9 FM and Spilt Ink SLC. So, if you’re 21 or over, fish out your best $5 bills from the dryer and let’s make it a date.

It isn’t very often that one who lives in a smaller city such as Salt Lake gets to experience a band of this magnitude. L’anarchiste, led by Rob LeCheminant, aim to push music to its logical limit by offering their listeners a little bit of everything, while never making the audience uncomfortable. Drawing comparisons to Sufjan Stevens, Bon Iver and Andrew Bird, these guys are intent on mixing electronic experimentation and vast instrumental variety with a mellow, indie vibe that everyone can appreciate.

L’anarchiste had a humble beginning in vocalist/instrumentalist LeCheminant’s basement. The concept of the group is merely to create music that is both engaging and intriguing, without conforming to a specific sound for a specific audience, which their name—French for “The Anarchist”—suggests. “It was a way for me to base a project around the idea that I didn’t have to be genre-specific or any particular style,” LeCheminant says. “I was basically doing whatever felt right at the moment, so our sound is pretty varied.” Although they strive for a diverse sound, LeCheminant makes a point to demonstrate the idea that “each song is pretty distinct from the next,” he says, “but they still have a cohesiveness to them.”

Beginning as LeCheminant’s vision of self-exploration and non-conformity, L’anarchiste has moved out of the basement and into the spotlight. The process hasn’t been smooth or easy—“I just started writing whatever came to me. I didn’t really hold back,” he says. “I mean, I did a little bit in some areas, but I was getting used to the process of not holding back,” says LeCheminant. Critical self-realization and a need to connect emotionally with their audience led L’anarchiste to the point at which they felt it was crucial to take their multi-layered, instrumental textures and heartfelt lyrics from the studio to the stage.

This transition has been a pleasant struggle for the band, due in part to the immense amount of instruments and unconventional sounds layered on top of each other. This, combined with the fact that there simply aren’t enough band members or stage space to recreate the music, has presented some interesting challenges for the group. Bassist Alex Gilvarry has taken it upon himself to handle the spatial and logistical restraints placed upon the group’s sound by creatively reconfiguring songs to make them work in a live setting. “Our old song ‘Iron,’ that we still play a lot,” Gilvarry brings up as an example, “on the recording, it’s only vocals, which we can’t do live, so we had to expand what the song was to fit a live sound,” he says. Although this may seem daunting to some, the overall impression seems to be that they enjoy the challenge, and feel that their live sessions can sometimes be better than the studio recordings.

Part of what makes L’anarchiste so intriguing—aside from their ultra-dreamy, cinematic aesthetic—is the fact that the group’s instruments are constantly in rotation, making the band continually learn and experience new ways of making music. “A slight focus of the band is to really help the players be versatile, because the parts aren’t always easy, and I use a lot of weird rhythms, and I don’t shy away from it because I figure these musicians will eventually learn their parts and it will only make them stronger as a musician,” says LeCheminant. Gilvarry says, “Usually, when I pick up a new instrument, it inspires a new song, and I try to do that as often as possible…Which is why we rotate instruments so much.”

This dedication to musical diversity is aided by LeCheminant’s expressive lyrics and musical composition. “A lot of times, it starts with a new instrument. I always save every single musical idea I have in my phone. I’ll listen to those and build an idea in my mind of what it could be. It’s always music before lyrics—in almost every instance,” he says. After the musical idea is created, then LeCheminant focuses on the lyrical content, making sure that it is personal, yet accessible. “I try to give something that people can latch onto but is still important to me,” he says. “A lot of these songs are emotionally based for me, and they have specific meanings to me, but I try to give something that they can also hold onto also, because what’s the good in writing music like this if other people can’t latch onto it as well?”

Latch onto L’anarchiste’s curious ambiance on Dec. 12. Be sure to check out their Bandcamp at lanarchiste.bandcamp.com and look out for a new album in 2015.