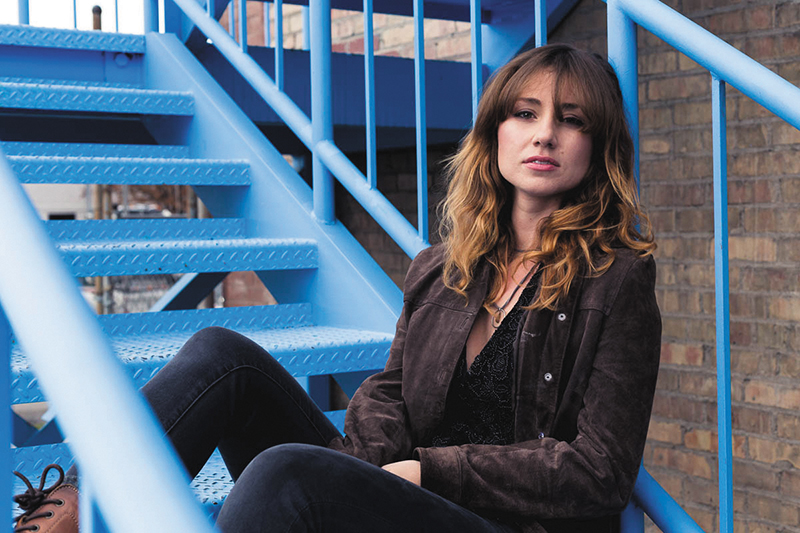 Join SLUG Dec. 8 for our latest Localized event at Urban Lounge. This showcase is 21-plus, and doors open at 8 p.m. As always, Localized is free, thanks to our beautiful sponsors at Uinta Brewing Co., High West Distillery, KRCL 90.9FM and Spilt Ink SLC. AudioTreats will warm-up the night with some slick beats, followed by co-headliners CHOiCE and Le Voir.

This month’s Localized event spotlights some wicked-cool women, such as Utah’s very own Gillian Chase, lead vocalist of synth-pop band Le Voir. Although the band’s lineup as it stands today is relatively young, the group is something that Chase has been cultivating for several years. But what started as a solo acoustic project has since transformed into something much more complex and unique.

Post-college, Chase made the decision to take her musical talents to the next level by beginning her tutelage under Derek Beck of Salt Lake DJ & Production. Under Beck’s guidance, Chase learned the ins and outs of production software and was able to finalize Le Voir’s album, Dualities, in March. “It’s cool, because in the beginning … we produced [the songs] together,” Chase says. “By the end of the album, they were all my productions. It was a cool learning experience for me, because I started by needing someone [to walk] me through stuff, and by the end, I was doing everything by myself.” After the completion of the album, Chase decided to enrich the sounds she had created with a live band. “When I finished the album, I knew I wanted the live portrayal to be more than just a DJ set, so I started putting the band together.” Rob Lyons, a close friend and bandmate from a previous project, was the initial recruit and brought his extensive guitar skills. Clifford Moon and Alex Siciliano joined after several performances as drummer and bassist, and the final lineup was solidified. “Since that team was assembled we’ve been reinterpreting the songs on the album for them to shine more in a live setting,” says Chase.

While producing Dualities, Chase says that she wasn’t really thinking about how the tracks could be performed live. “There’s so many electronic textures, and trying to figure out how to do it live took a little while to figure out,” but the members of the group she assembled each carry the pop sensibility that understands how to bring electronic music to life. “It’s hard because you want the sound and you want the sonic texture of what electronic instruments provide, but playing them live, it’s more difficult because it requires a rigidity that’s not always natural and easy to play.” It may be a difficult task, but the band accomplishes it brilliantly under Chase’s steady direction. “I wanted to combine the positive parts of electronic music, like the energy and how it makes you feel so good when you feel a strong rhythmic beat,” she says. “At the same time, live music, being played by live musicians, brings something that I feel DJ music lacks.”

In June of this year, Le Voir had the opportunity to play at the Bonanza Campout in Heber, Utah. Their show was nearly canceled thanks to our wild weather, but a break in the rain allowed the young band to perform alongside mainstream bands like Cold War Kids. “Any time you get to play music where there are bigger acts and you’re playing on the same stage, it feels so good,” Chase says. “It’s really cool just to be part of the experience like that.” These live performances are where Le Voir’s music can really shine, with Chase mixing looped samples with vocals. “The live shows are really exciting,” she says. “We try to expand on the ideas that you hear in the album, which you can dig into and elaborate on more than on the album.”

Le Voir merges both the older and newer facets of Chase’s musical artistry. “I wanted to find a place that had both worlds of my singer-songwriter history and the excitement of electronic music,” she says. “It’s different, and it’s new.” Chase calls the sound softronica and laughs when she explains that it’s a gentle side of electronic music because of the fusion of acoustic guitar riffs with electronic music’s usual digital beats. Moving forward, she hopes to continue searching for a balance between the rigidity and rawness of EDM and alternative music. Her next project in the works will be an acoustic version of the electropop-infused Dualities. Chase is hoping that the album will be completed at the start of the new year and released as early as next spring.

As for the future, Chase anticipates creating new music alongside her bandmates. “Making art is a way of releasing and understanding the things you’re feeling by making them a little more tangible. A lot of times, it starts just with an experience, and finding a place in the sonic world where that makes sense—where it feels like it belongs.” Le Voir recently went on a mini-tour in Colorado in early November, and Chase is now even more excited for the future. Chase hopes that the band “has the opportunity to be heard,” she says. “I hope that, locally, we can show the music, because I’m really proud of what we’ve made, and I think it’s different than some of the music that’s out there now. I definitely want to keep trying to push that envelope and finding more contrast between the singer-songwriter and the electronic genres. That’s the part that’s most exciting to me.” In a world of constantly fluctuating sounds, this electropop outfit is ready to deconstruct established genres and continue expanding local music.

Check them out on Facebook at facebook.com/levoir/ and on Twitter (@levoir) and stream their latest album at levoirmusic.com.