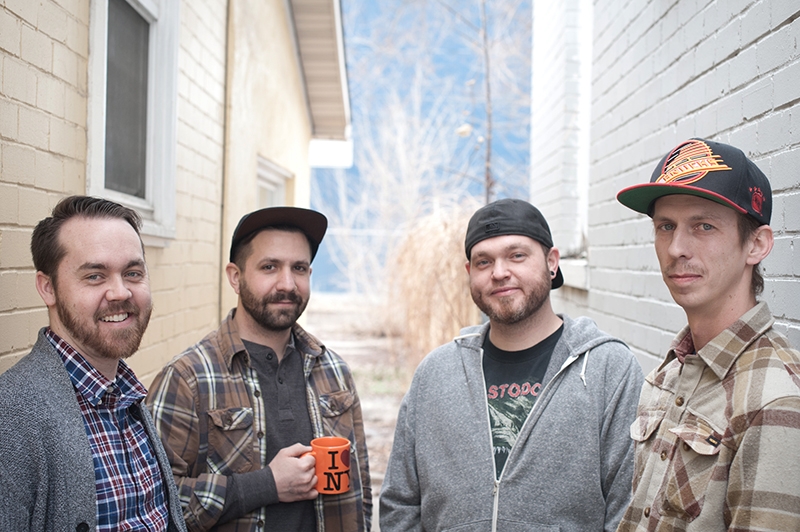 This month’s Localized, on April 18, will feature a mysterious hodgepodge of sincerity. Crook and the Bluff will start off the set with western-tinged psych-blues, after which blues crooning, working man rocking, badass motherfuckers Vincent Draper and the Dirty Thirty will sexy your face off. Following, mustachioed and chocolate-voiced singer-songwriter and strum-master Charles Ellsworth will finish things off. This delicious treat begins at 10 p.m. at Urban Lounge, $5 for those 21+. The night is hosted by Ischa B. and sponsored by Budweiser, Spilt Ink and KRCL 90.9FM.

Vincent Draper and the Dirty Thirty are a group of fantastically sarcastic gentlemen. The Dirty Thirty began their legacy when Carson Wolfe and Eric Lund’s previous band, Small Town Sinners, broke up. A short number of years later, two others (Alex Terry, drums, and Jon Roberston, bass) joined to round out what is now a quartet, having met through, of course, the music community. “When Eric was on vacation, I subbed bass for The Small Town Sinners for about two weeks. I don’t know where he came from,” says Robertson, gesturing to Terry.
Wolfe, who takes on frontman responsibilities for the band, learned to play guitar and began songwriting at a young age. “I started playing music when my friend left his guitar at my house in junior high. I would just doodle around on it. Then I started writing terrible songs and just never quit,” Wolfe says. This early experience in songwriting has given him a leg up in his current music-writing ventures. “Typically, my inspiration comes from a drunken place. As a songwriter, I’m pretty emo. My songwriting generally comes to a halt as soon as there is a girl who I am interested in, then my heart will get broken and I start being a better artist again,” Wolfe says.
Wolfe and Charles Ellsworth are fresh off the recording of their first split album, Salt Lake City: A Love Story, which details love found and lost both inside the city and on the road.  “I think Chuck has an interesting way of letting you get to know the characters in his songs to the extent that they end up being very personal,” says Wolfe. The evident contrast comes, mostly, in the form of songwriting styles presented by both men. “I don’t typically write in a storytelling manner. Mine comes across a lot vaguer with more imagery.” When put concisely, it sounds a bit like this: “In other words, you’ve got your Neil Young, and you’ve got your Bob Dylan,” Terry says. In the end, the album came together very distinctively in concrete form. “I think the contrast worked out well in the final product. It goes back and forth from specific to impressionistic, and best, it’s dedicated to our home,” Wolfe says.
In the spirit of our Salty City’s family of artists, Wolfe and Ellsworth recruited a handful of talented locals to assist their musical creation. “We covered one of Josaleigh Pollett’s songs and she sang backups on a few of the tracks. Genevieve Smith was a cellist and Sam Osimitz from Hectic Hobo played the fiddle,” Wolfe says. The band hasn’t decided yet, but they are discussing the possibility of enlisting one or all of them to perform with them for Localized. The use of locals even comes down to the chosen recording studio, Archive Recordings, and sound engineer, Wes Johnson.
Recounts of a recording experience can be very telling about both the record and the artist. “Chuck and I had to become the band, and we ended up being the entire rhythm section album. We live-tracked him on bass and me on drums. Getting to step back and not be a singer or guitar player gave us both a new perspective on the album,” Wolfe says. Creating a final product during a recording process is about more than just playing music in a studio. “Once you get to the recording, the playing part of your music is such a minor detail. It goes through such a rigorous process that you can literally fuck up all your notes and there is technology out there to make it sound perfect,” Terry says. Wolfe chimed in, saying, “We rely entirely on Beat Doctor and Autotune,” followed by a final quip from Terry: “We’ve got T-Pain in the house right here!” he says.
The first release of Salt Lake City: A Love Story has been released exclusively on vinyl with a supplemental digital download. “One of the things we like to take pride in is that when you purchase a tangible item from us, you get something special. On the previous recording, Sam, we included a manila envelope with some stickers and buttons,” says Terry.
After an hour of hilarious banter, I left Wolfe’s house with a large grin on my face. Getting the opportunity to meet and converse with a group of hardworking local artists always gives me heightened hope for humanity.
Localized is sure to be exceptional, with a possibility of the whole conglomerate sharing a stage on and off throughout the performance. “Usually, when you got to a show, one person plays and then the next, but our shows with Chuck are more of a collaboration of artists, with interchanging members during the entire show,” Lund says.