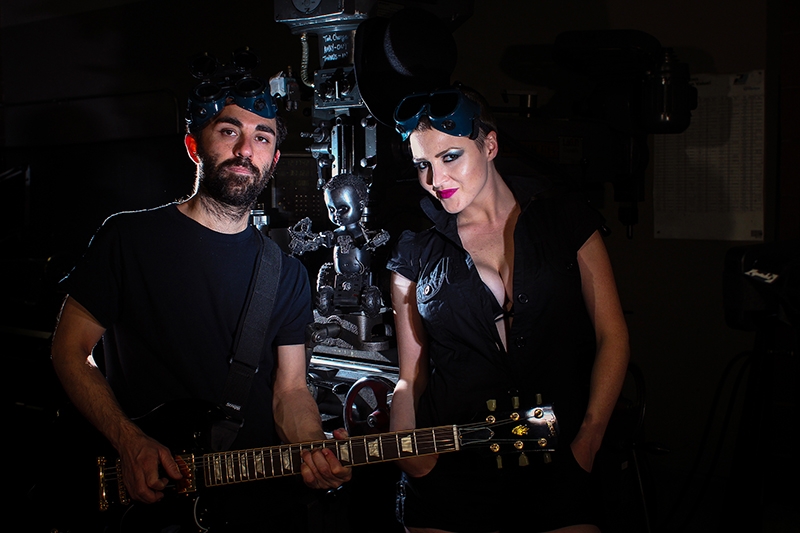 Get ready for a shape-shifting visual performance when Raffi Shahinian and Ischa B. of MiNX bring their hodgepodge of fun to Localized.
Photo: John Barkiple

The bubbly, vivacious vocalist of MiNX, Ischa B., greeted me outside a nondescript machining facility—an oddly appropriate meeting place, given MiNX’s often dark, industrial visual style. We went inside to sit with the other half of the band, the comparatively soft-spoken guitarist Raffi Shahinian, who explained that Ischa and he had known each other since ’97 and that MiNX grew from the political-sex-rock act, Uncle Scam. Ischa became involved in Uncle Scam after becoming weary of her day-to-day grind: “I was working retail, corporate America. I was like, ‘Man, I gotta do some music. I gotta do some art,’” she says. Soon, she was enlisted as lead vocalist. Uncle Scam thrived for a while, earning positive album reviews and even playing a Localized show in 2010 before band members departed, leaving only Raffi and Ischa to tinker with their sound. “The other band members left and Raffi and I continued the Uncle Scam project, but were starting our own project that was just us,” says Ischa. In February 2012, MiNX jolted to life.

Since then, the band has been busy. “For the sake of honesty, I feel like we’ve been on a fucking train going 500 fucking miles an hour since 2011,” says Raffi, who explained that last year, the band released two full-length albums, Golden and 13, as well as acoustic EP Summertime Unplugged. But as Ischa says, if they aren’t busy, they get bored: “We’ve got to entertain ourselves! When we’re working on an album, every moment is dedicated to the album. When we’re not working on the must-dos like eating, working and sleeping, we’re working on the album. We also just like to have fun and explore,” she says.
Exploration has led MiNX to combine rock and electronic elements like sonic alchemists. Raffi brings hard rock, soul and funk to the mix, while Ischa stirs in components of the electronic spectrum, citing artists like Eurythmics, Pet Shop Boys and Depeche Mode as influences. “[Our sound] is experimental in that we’re not telling ourselves no. If something comes up and we think, ‘Oh, you should rap to this,’ I say ‘OK, I’ll rap to this even though I’m a white girl who lives in Utah,’” says Ischa.
The product they’ve created is something that can be thought of as a mixtape. According to Ischa, “We leave it open-ended like that. If you listen to us, you’ll find a hodgepodge. You can’t make an assumption off of one song because you’ll find something else very different.” As Raffi notes, a sonic pastiche is a good way to connect with a variety of people. “We want people’s ears to connect with what they’ve seen and what they know,” he says.
Of course, for MiNX, music is just one half of the show. The band’s magic extends past your ears and into your eyes with elaborate stage props, costumes and visceral online videos. “We pretty much just have fun. Ischa takes care of the costumes and I just get to go in my hole and make music. We work to each other’s benefits,” says Raffi, who noted that the big push into the theatrical landscape comes from Ischa. With a diverse artistic background that includes everything from working in costumes at the Utah Opera to prepping for photo shoots and doing makeup and hair, she’s certainly the woman for the job. Together, the two have chemistry that results in a full-body experience combining Raffi’s passion for guitar with Ischa’s passion for everything comprising their visual aesthetic.
Where visuals are concerned, inspiration comes from dozens of places. “I like to snoop online at all the inspirations you’d imagine, like Madonna and Britney Spears and Annie Lennox—all of the trite assumable stuff—yes, it’s all inspirational,” says Ischa, who also explained that a big part of creating art is collaboration. “It always starts with someone actually doing it for themselves and finding other people who want to play with them, which is how I feel about the people helping us make our music videos—they want to make art and we want to make art,” she says.
Their amalgam of visual and audial elements pours out in live performances, giving audiences a shape-shifting experience where Ischa’s costumes change with songs and setlists change for various venues. “We play acoustic shows and I love the moodiness,” says Ischa, “but we generally play at bars, and since people at bars are trying to have a good time, we try to make our set applicable; we encourage people to come out and have the good time that they came out to have.” Raffi adds that the benefit of having such a wide array of songs is that you can adjust them to fit any audience. “Since we have a large amount of songs, we get to do a MiNX’s greatest hits so we can pick out the most fun, bouncy songs and the ones the audience responds to.”
In the world of music, you can find countless examples of experimental art, though you’ll be hard-pressed to find a group as compelling and stimulating as this inventive duo. Check out MiNX’s extensive catalog of songs and videos at minxband.com, and keep an eye out for exciting news on their upcoming music video project.