Urban Lounge is the spot on Friday, Jan. 13 for bona fide rock n’ roll and punk with ABK and Vena Cava. Filth Lords open the 21+ show, and, as always, $5 gets you in. 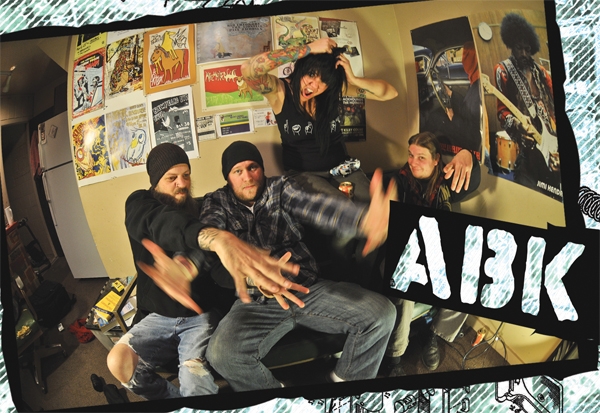 Urban Lounge is the spot on Friday, Jan. 13 for bona fide rock n’ roll and punk with ABK and Vena Cava. Filth Lords open the 21+ show, and, as always, $5 gets you in.

Over the course of the last five or six years, Anna Kennedy has put her son to bed and stayed up late, singing spur-of-the-moment songs with her acoustic guitar. She initially captured what bandmate Andy Patterson refers to as “the magic” on her cell phone, and sent a slew of songs to a handful of friends at 2:30 a.m. over a few mornings last March. Patterson recalls, “One day, I woke up and there was an email … with a song!” Patterson knew right away that Kennedy lit the flame for a sexy-sounding rock n’ roll band with a dynamic frontwoman.

What Patterson heard were raw acoustic songs with Kennedy’s sultry voice flowing like whiskey out of a bottle. Compelled by working with Kennedy when she was in bands such as Racket and Trashmodels, he agreed with Kennedy’s desire to make a record out of what she mass-emailed to her friends. The first people to reply comprised the lineup of the new band, but when their other projects and responsibilities hindered them from taking the project any further, Kennedy and Patterson decided to handpick a solid lineup. Upon initially reviewing Kenndy’s material, Patterson instantly started thinking of whom would be great fits for certain roles/instruments in the band. He identified Jeff Anderson and Jeremy Cardenas for the guitar work, and the prodigious bassist Dave Jones—multi-faceted musicians without what Patterson refers to as “one-track minds.” Though these musicians come from heavier projects like Top Dead Celebrity, Dwellers and Oldtimer, they have no problem playing a relatively more mellow style of music. Jones captures it perfectly when he says, “Good musicians listen to about every kind of music … I’ve done a lot of stuff and basically listened to every kind of music. When stuff’s good, you want to be a part of it.” With members who pull in a diverse fan base, including regular old “drunks” and “dudes with beards with beer in their hands,” they could virtually play with anybody and for any audience.

Once the band solidified its lineup last April, Kevin Kirk of The Heavy Metal Shop asked them to open for Eddie Spaghetti. Online videos of the show depict the band as having enough discipline and sensitivity to dynamics to highlight Kennedy as the focal point, hence the name ABK (which stands for Ann-Britt Kennedy). Kennedy shines as the singer-songwriter figure of the band, although she is quite modest about her role in ABK. “Honestly, I don’t really think about it very much. It’s just music that I’ve been playing for a really long time by myself, so I’m pretty stoked that it’s actually on a record now with my friends playing it with me,” she says.

Speaking of records, the band is about halfway done with an official full-length release. When Kennedy and Patterson were in the process of cementing the official lineup, Kennedy recorded some solo scratch tracks in Patterson’s studio. From there, as the rest of the band accumulated, each member took her solo tracks to build upon privately. Whether it was Patterson thinking about what would fit with Kennedy’s parts in terms of the beat or what would complement her songs on a recording (e.g. subtle uses of piano or steel guitar), or Anderson creating preliminary guitar lines to bring to practice, the band has focused on Kennedy’s individual energy to bring to practice and develop the release. Anderson says, “It’s not overly rehearsed and it’s not overly thought-out.” That is, the band comes to recording sessions prepared, but, in the end, they look at where Kennedy’s songs want to go organically. ABK hope to release their new album by the time Localized rolls around, but are making sure not to rush the process, as they want to take as long as necessary in order to make the release sound as refined as possible.

When the album is finished, fans will be able to buy a copy online. Whether ABK will self-release the album or find a label is still to be determined, but they all agree that physical copies will eventually be available for a small amount of dough at their shows. Kennedy and the boys plan to peddle their rock n’ roll at The Heavy Metal Shop for an all-ages CD-release show in conjunction with what will most likely be a bar show later on in the night. At some point, they hope to do some weekend shows in nearby states, but until then, you can likely catch this lady n’ these gents around town with anyone and everyone for a night of smoky rock n’ roll.