SLUG Mag Soundwaves
Episode #389 – Bobo
00:00 / 17:54
Spotify Stitcher
RSS Feed
Share
Link
Embed
If you’ve been hanging around the local scene for a while, chances are you’re already familiar with Jesus or Genome, while Color Animal and openers Nathan Spenser and Dylan Roe may be exciting, new flavors. Whether it’s scene veterans or the new kids on the block, one thing is for sure—there will be a great variety of folk, indie and garage rock sounds bellowing out of the Urban Lounge at this month’s Localized on July 13 for just $5 (21+). 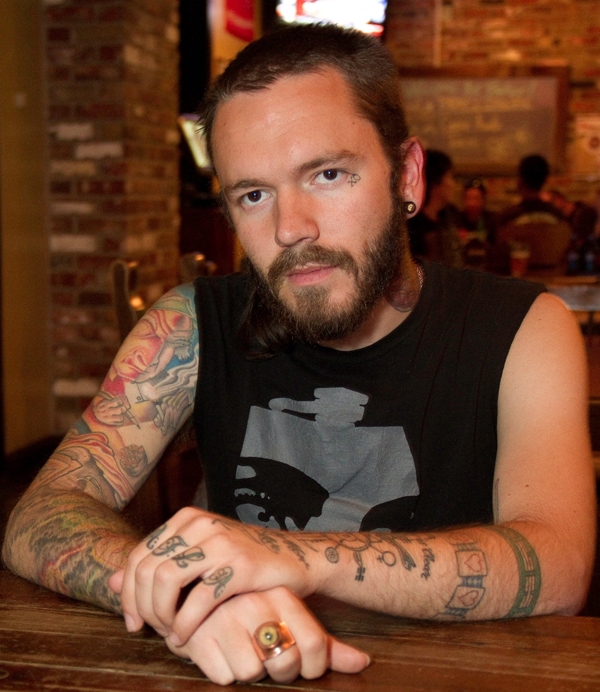 If you’ve been hanging around the local scene for a while, chances are you’re already familiar with Jesus or Genome, while Color Animal and openers Nathan Spenser and Dylan Roe may be exciting, new flavors. Whether it’s scene veterans or the new kids on the block, one thing is for sure—there will be a great variety of folk, indie and garage rock sounds bellowing out of the Urban Lounge at this month’s Localized on July 13 for just $5 (21+).

Every Wednesday night, you can find Mike Cundick playing at Poplar Street Pub under the name Jesus or Genome. Music is his biggest passion in life, but Cundick has a bigger picture in mind. He never intended to be much of a local activist, but he now uses his solo acoustic project as a vehicle to help support causes he cares about, such as Artists for Local Agriculture, which he founded earlier this year. “I believe that humankind is very innovative and there’s a lot that we can do to solve the problems, but people need to disconnect from the TV and media a little bit, and start to really look at situations and try to reconnect with themselves and with the Earth,” says Cundick. “I think the way I can do that at the moment is through Artists for Local Agriculture. I think it’s a great cause and will help bring awareness.” AFLA is a non-profit organization made up of musicians and activists working to support sustainable, local food production.

In years past, Cundick has toured around the country in LOOM with bands such as the The Used, playing huge shows for thousands of people. Now, armed with just his acoustic guitar, Cundick is keeping most of his attention on the local scene. The birth of Jesus or Genome occurred in the fall of 2010 when Cundick, whose family has a history of bipolar disorder, suffered from what he calls a “manic episode,” in which “reality can get very warped.”  Cundick randomly shouted out the three words to a group of kids who were asking him weird questions. “I had no idea what in the world it meant, but I just went with the name. It’s an interesting name to go with because it definitely gets a reaction out of people,” says Cundick.

His Bob Dylan-esque songs do not specifically talk about sustainable, organic products. His lyrics are more about his personal feelings, ideas and views, which is the main reason he started Jesus or Genome. The 26-year-old musician has been in multiple bands, most notably LOOM and Worst Friends, since moving to Salt

Lake about eight years ago. However, he admits that playing solo makes it easier to connect with those listening to him play. “I love my band, LOOM, and I also like my side project, Worst Friends, but the acoustic stuff has been really rewarding, particularly lately,” says Cundick. “I feel like I’ve been able to get out a more passionate message that people can really hear [in] the lyrics. It pops out, and it seems to affect people a little bit more.”

The songs Cundick sings often feature in-depth lyrics meshed with engaging acoustic guitar playing, creating a dynamic style of folk rock. There is no strict philosophy to his songwriting method, though. “The songs I write will come so quickly that there’ll be a couple months without anything and then, in one or two days, I’ll have a brand new song,” says Cundick. “It’s just when the timing’s right. I’m very much a believer that most of my best ideas come from an outside source.”

Although playing in a bar every week may not be the ideal environment to promote the growth of local agriculture, Cundick enjoys playing at Poplar and often invites other local musicians to play with him. He aims to get more gigs at all-ages venues where people will be able to listen to his music more closely.  “There are some weeks where I feel like the crowd is very stoked on everything I’m doing, and other weeks there’s a lot more distractions. The energy changes all the time. You never know how things are going to go, but it’s been a fantastic gig for me to have something consistent for my music,” says Cundick.

Cundick has already put out an EP on Sacred Plague Records and will debut a new full-length Jesus or Genome album this July. He is planning a mini-tour of the Northwest this summer to support the album, but after years of touring all over the country in other projects, Cundick would like to keep his focus on the local scene as much as possible. “My big passion is seeing Salt Lake become more united with itself and have more of a respect for its local artists, musicians and food producers, too,” says Cundick. Although he has his criticisms of the public’s obsession with mass media and social networking, Cundick does admit that the Internet has its benefits, such as making it easier to get his music out to people, which, in the end, is a good thing for the local musician and activist.

Make sure to head down to Urban on July 13 to catch Jesus or Genome’s unique brand of thoughtful and intricate acoustic music.