00:00 / 18:49
Spotify Stitcher
RSS Feed
Share
Link
Embed
September’s Localized brings to the stage two of the hardest-working heavy acts in the valley today: Cornered by Zombies, a thrash metal two-piece that is erupting onto the scene, and Settle Down, the latest hard rock collaboration of veteran musicians you may already know and love. On Sept. 14, Urban Lounge (21+) hosts these two badass bands and openers Gunner, who will tear up the stage. For a mere five bones at the door, you can’t afford to miss it.

Localized – Cornered By Zombies, Settle Down and Gunner 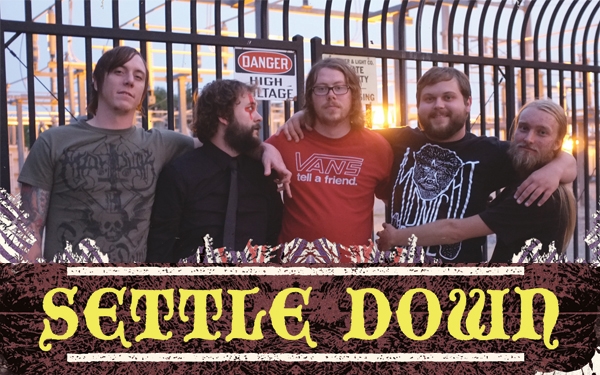 September’s Localized brings to the stage two of the hardest-working heavy acts in the valley today: Cornered by Zombies, a thrash metal two-piece that is erupting onto the scene, and Settle Down, the latest hard rock collaboration of veteran musicians you may already know and love. On Sept. 14, Urban Lounge (21+) hosts these two badass bands and openers Gunner, who will tear up the stage. For a mere five bones at the door, you can’t afford to miss it.

Settle Down is sort of a bastard child of a band­—a thing created by dudes who love music so much, one band just isn’t enough to quiet their creative muses. An endeavor like this takes a special kind of trust between bandmates, both as friends and as musicians, which is rare and wonderful to watch. Most musicians can’t juggle a single band with work, family, school and all of the other demands of life. The boys in Settle Down give a hearty “fuck that” to such complications: They all work multiple jobs and contribute to at least one other band, if not more, including I Am the Ocean, reggae band Slow Ride, pop-rock Antics and bluesy Twist the Bulb. Vocalist Dreu Hudson says, “We don’t fuck around.”

Hudson highlights an interesting perspective on their music, considering the band more or less started as a joke. “Our friend, Bacon, took some acid and decided he wanted to learn how to play drums, so Jeremy and I started this band to teach him, and it kind of turned into something real,” says guitarist Eric Rose. The percussion student Bacon left the band—which, Rose says, is “a whole other story”—and the group tapped on the shoulder of drummer Taylor Orton to replace him on this new, major trajectory. Orton and Rose have played together since their high school days, and he and Hudson also play together in I Am The Ocean, creating a unique and comfortable foundation for this new outfit. Together with bassist Jeremy Conder and second vocalist Alex Johnson, Settle Down came together, writing what Rose describes as pop-influenced heavy rock. “We just try to create music that is appealing to us— groovy, but something more,” he says. They try to tap into the same vein feeding bands such as Torche and Deftones—acts that are undeniably heavy, yet appealing to folks who don’t normally enjoy the darkness of thicker genres.

Unlike each member’s other bands, Settle Down boasts two vocalists—a sight that usually signals one vocalist doing the heavy lifting while the other offers the clean sweetness … but that’s not the case here. Instead, Hudson says he and Johnson only aim to make the best sound they can, with no formula or back-and-forth road map. The vocals are harsh, but not your typical death growl—it’s more like the desperate, lung-burning howl of Touché Amoré. They accent and strengthen each other and the overall atmosphere of the track, almost chanting over the melodies underneath. “I’m a little more of a passenger. Alex Johnson is the lyrical driver here, and I just come in and add my flavor to it. He’s really image-driven and dark, and I just try to get dark with him. We both do all kinds of stuff vocally. Everything we do is super organic,” says Hudson.

At least a decade of playing together has bred a unique relationship between these musicians. After all, not many bands can claim to almost never practice and come out with a polished and enjoyable sound at the other end.  Yet, this is the field Settle Down is playing on. “[When] we get together, we just try to kick ass as much as possible. We write and record—we don’t practice,” says Rose. This devil-may-care method of music-making is unusual, to be sure, but the guys have trust in one another. Especially strong is the intuition between high school buddies Rose and Orton. “Eric and I have been jamming forever. Anything that’s coming up from him, I can already feel it,” says Orton. As a full group, they are supportive of the music at large, and check any needless vanity at the door—nothing is held back, and the music is built with open minds and mutual respect, or, as Hudson puts it: “No egos, just tall boys.”

The comfortable vibe woven throughout has certainly translated into some real-world successes since the decision to turn the band into a serious project. In a year’s time, they’ve not only played a smattering of smaller gigs throughout the valley and Provo, but they were also a part of both Crucial Fest and Doom and Gloom Fest this year, two of the biggest festival-style showcases for heavier music in Utah. Settle Down see the local metal scene being in somewhat of a downturn at the present moment, but have lost no love for the bands or fans still keeping the faith. “I wish kids responded more the way they used to, like five years ago, but the people that appreciate it will always be there,” says Rose.

A big first year is only getting bigger with the band’s first release, a split 7” with Sure Sign Of The Nail, booked tentatively to coincide with their Sept. 8 show at Burt’s Tiki Lounge alongside Yob and Norska. While they have no concrete plans for a tour, the band has already recorded enough material to fill three more records, which means the Salt Lake Valley is going to get a lot more sweet tunes in the near future.