Saturday, Nov. 10, you’d better be thankful you live in a land where Zion’s rock n’ roll forefathers worked their asses off to give you the shows you have today. Localized will feature two of Uncle Andy Patterson’s outfits, Top Dead Celebrity and Døne, oozing heavy gravy all over you turkeys at Urban. Openers Despite Despair will prep the big kids’ table with some electric-knife hardcore to kick off a raucous night of rock for you 21-plus music junkies for a small morsel of $5. 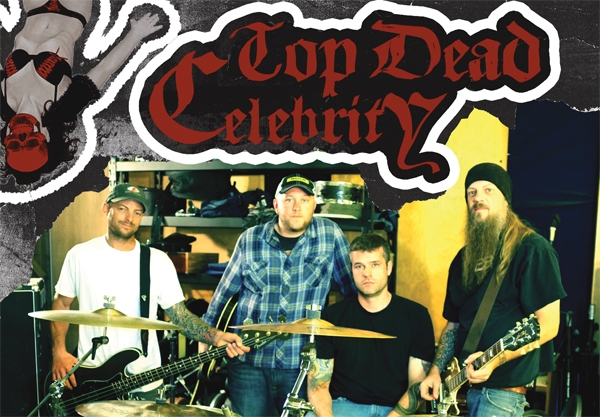 Saturday, Nov. 10, you’d better be thankful you live in a land where Zion’s rock n’ roll forefathers worked their asses off to give you the shows you have today. Localized will feature two of Uncle Andy Patterson’s outfits, Top Dead Celebrity and Døne, oozing heavy gravy all over you turkeys at Urban. Openers Despite Despair will prep the big kids’ table with some electric-knife hardcore to kick off a raucous night of rock for you 21-plus music junkies for a small morsel of $5.

Being wizened vets of Salt Lake’s music scene, Top Dead Celebrity’s temporal inception is a bit hazy for them, but guitarist/vocalist Jeff Anderson thinks it started somewhere in 2008. He was in a band with drummer Jesse Mills and former guitarist Nate Moosman called Rifle Street Music, which “was fizzling out,” says Anderson. After a Rifle Street Music rehearsal, Anderson, Mills and Moosman stayed late to work on some material that Anderson had in his pocket. Their jam session resulted in nascent Top Dead Celebrity songs, which took the form of an amalgamation of devil-may-care Motörhead rock n’ roll and dense Black Sabbath stoner metal, unafraid to wield the guitar solo nor to employ gnashing screams. The three rough-tracked a record to plant a sonic foothold for themselves with Anderson on bass, but he wanted to play his instrument of choice, the guitar. Anderson thus inducted bassist Jeff Johnson into the band, with whom he’d played in Stolen Marches. The quartet recorded their self-titled, debut record in this incarnation, and underwent a West Coast tour, after which Moosman quit. Afterward, they toured as a three-piece yet again, taking Jeremy Cardenas, Thunderfist legend, on tour with them as their merch guy, which eventually led to Cardenas playing guitar for roughly two years and helping write their sophomore release, Midwestern Rube. Cardenas got to the point where he felt “stretched out,” as Anderson puts it, having to juggle Top Dead with Thunderfist, and quit in 2010. Having made tentative plans to go into the studio with Andy Patterson, Anderson deferred their plans to record a third album. Patterson knew that Cardenas’ commitment to Top Dead Celebrity was waning. He says, “As soon as I heard he quit, I said, ‘I’m going to play guitar in your band.’ They said, ‘Do you know how to play guitar?’ and I said, ‘No. But I’m going to play in your band anyway.’” Patterson states that he’s always wanted to play guitar, but given the general dearth of drummers and ubiquity of guitarists, had never had the opportunity. Once he got the “in” in August of 2010, he practiced diligently for his first rehearsal. Anderson says, “I’ve never seen Andy practice so hard on his own, personal time for something.”

Although Top Dead Celebrity has access to the plentiful, heavy-hitting equipment in Patterson’s studio, the band stays focused on what gives their rock n’ roll its punch: songwriting. Not to say that they haven’t or won’t take advantage of this amenity in terms of recording—“Whatever works and sounds best wins,” says Patterson of creating a Top Dead record—but Anderson’s growth as the principal songwriter will shine through in a new album that the band is almost done writing. After having tried for a certain sound in younger years, Anderson has come to recognize when song creation is contrived and when it’s genuine artisanship. Though Top Dead won’t be “reinventing the wheel” with this release, the band has reached a point where they can integrate aspects that aren’t necessarily slobberin’ sludge: “It’s going to be a Top Dead record, but I think it’ll be a little different,” says Anderson. “I have no ego to bruise, so I’m a little more comfortable doing some things different singing-wise, putting some acoustic stuff on there, probably, so there’ll be some sad bastard music on there … It’ll probably be different sonically.” Top Dead Celebrity plan to track each song as a distinct piece, a collection of works to showcase rather than just an album that subsumes tracks. Patterson notes that being older allows musicians to be more comfortable with defying aural genre expectations and being willing to experiment with a band’s sound. In addition, he illuminates that Top Dead Celebrity’s trust in one another and their fans is conducive to the band bringing sensible music to the table that fits with how they’ve established themselves in terms of their sound.

“It seems like, once you stop giving a fuck, then you start selling records,” says Mills, though Top Dead Celebrity really has no qualms in terms of how many records they sell. Patterson says, “I think we just play ’cause we like playing and we like making music … Honestly, when it boils right down to it, any money that I would make off a band that made money would go back into the studio anyway, so it would just be a full-circle kind of thing.”

After Localized, you may find Top Dead Celebrity at the usual spots—Burt’s, Bar Deluxe, Urban Lounge and hopefully the Shred Shed—and look for their third release sometime in spring. For the time being, you can purchase both of Top Dead Celebrity’s existing albums for $1.69 at topdeadcelebrity.com—seriously, it costs more to ship the damned things.