00:00 / 20:24
Spotify Stitcher
RSS Feed
Share
Link
Embed
Embarrassment might hold you back from admitting you were scared to make plans beyond Dec. 21, but if you’re reading this, the new year came and you survived the world’s end. Come celebrate your survival with the thrash-punk-metal noise of Screaming Condors and Simian Greed at Urban Lounge on Jan. 12. Cancer Culture open at 10 p.m.—your 21-plus ID and $5 get you in. 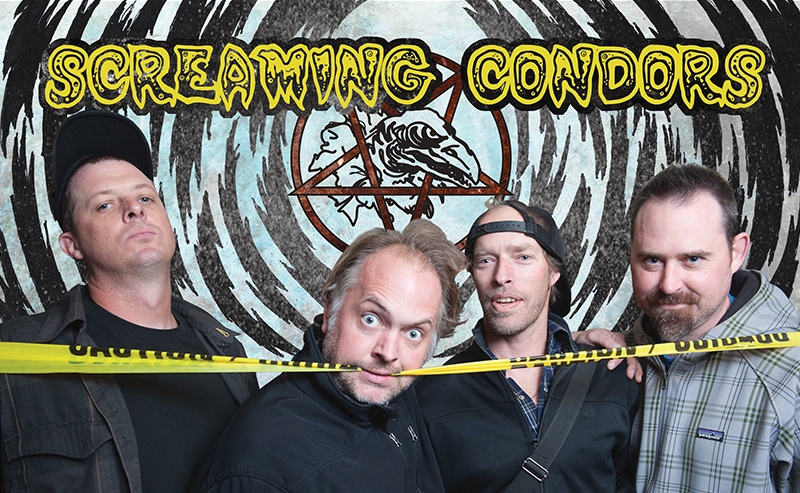 Embarrassment might hold you back from admitting you were scared to make plans beyond Dec. 21, but if you’re reading this, the new year came and you survived the world’s end. Come celebrate your survival with the thrash-punk-metal noise of Screaming Condors and Simian Greed at Urban Lounge on Jan. 12. Cancer Culture open at 10 p.m.—your 21-plus ID and $5 get you in.

The Screaming Condors’ origin can be traced back roughly to 2004 and a group called Hot Buttered Fart Pumper (HBFP). John Paterson and Greg Hillis got their start playing guitars together in HBFP, which would later become Screaming Condors. After about a year, enough time for Screaming Condors to get serious, the original bass player and drummer left. Sam Compton, a local drummer who was friends with Hillis and Paterson and had jammed with them in Hillis’ basement, saw their potential and was interested in joining. Compton says, “I kind of came in and was like, ‘Yeah, I’ve got a bass player buddy, too.’ So, I brought Tige [Campbell] over, and it just happened instantly,” which locked in the rhythm section to solidify the band. Campbell and Compton had played in a lot of other bands together, and so had Paterson and Hillis. “We just kind of united,” says Campbell. Screaming Condors have been playing with their lineup dynamic for five years now.

The group’s name has nothing to do with the Taiwanese roller coaster that sits atop the list of “Screaming Condors” Google search results, even though the band does have a song titled, “Colossus,” after the ride at Lagoon. The name was conjured on a drunken trip to Echo Lake. Hillis says, “I was all pissed because there were all these bands with intellectual names and all this shit, and I was like, ‘Dude we need something like a badass football team coming to town to kick some ass!’ and it stuck.”  Plus, you have to admit: They have countless potential album covers with the image of a condor shredding its vocal cords in an all-out scream.

Screaming Condors didn’t plan their sound—it was just what came out. Paterson says, “I always knew I wanted to play metal, but we’ve all got different backgrounds, so it sounds different. We don’t try to sound like something … Everyone plays their own thing, whatever feels good.” Compton cites their preliminary sound as being more metal, then growing from there. He says, “When I’m on drums, it has to have a punk rock feel, ’cause that’s where my roots are.” They all agree their sound resembles Metallica, specifically Kill ’Em All, but, like most groups, they’re reluctant to commit themselves to a single genre. They all classify their music a little differently—Compton calls it “skate-thrash-metal,” and Hillis laughs when he says, “I call it aggressive rock.”

Songs mostly sprout from collaborated writing sessions  within the Condors’ lair. A song could grow from one of Compton’s drumbeats or from an improvised jam that goes well. Campbell says, “A guy brings a song to the table and then we play it, for the most part … We all put our two cents in.”  Not every song is a complete collaboration, though. Compton says, “Sometimes Tige will put together a song completely, like totally do his homework and bring it … He’ll have a completed song with parts and everything.” Screaming Condors’ lyrical writing is less collaborative, and they write lyrics when they’re forced to. They all laugh about fine-tuning lyrics while laying down a track in the studio. Screaming Condors don’t have a lead singer—Campbell, Paterson and Hillis share that duty, so the writing of lyrics gets split between all three. Each vocalist will sing the song they pen while the other two provide backup vocals. Even though they might not collaborate lyrically on a single song, they say they each have a pretty even number of songs to sing. Campbell says, “There was a while there where we were like, ‘Should we have just one lead singer like your typical band?’ But we were like, ‘Fuck it, we’re having fun with all of us singing.’” They say they are more worried about having a good time than what others might think.

Screaming Condors haven’t released an album since 2010’s Nature’s Nightmare, which you can find on iTunes or at their shows, but they’re excited about their recent material and plan to record a new album soon. Hillis says, “All the new stuff is awesome. It just gets better and better.”  The new album might sound a bit heavier, but they haven’t made any major changes—nothing beyond a more refined sound. Hillis says, “We’re getting so much better at the vocals that I think we’re going to push singing more, at least background singing … and give the songs more fullness.”

When it comes to some of the local venues, there are places they could play every weekend if they wanted, but they plan to hold off on shows in order to get their set polished for the January Localized show. Compton says, “We’re excited to play at Urban coming up because the sound is so juicy over there.” Other than Localized, Screaming Condors plan to focus on getting some awesome shows lined up and record their new album in the near future.