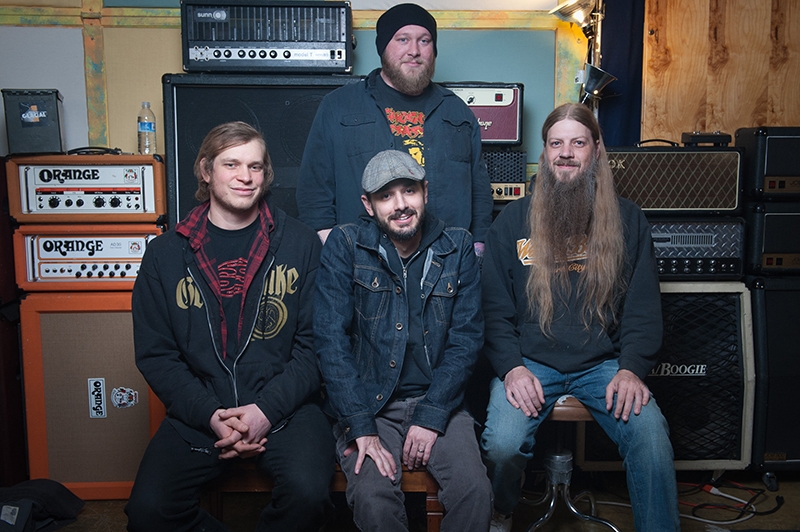 This month’s Localized features the dynamic lineup of Eons and Oxcross, with Yaktooth opening up. Drop what you’re doing on April 12 and come check out these up-and-comers rage real hard at Urban Lounge. 10 p.m., 21+, $5.

Every member of Oxcross is deeply rooted in the Salt Lake music scene—they are seasoned veterans. Every member has been in 10-plus bands, and a couple of them have been involved in more projects than that. They have seen trends come and go and dabblers dip in, then sell their equipment for something a bit more sturdy than the sometimes-volatile lifestyle that is rock n’ roll. Yep, they’re definite lifers, but in the good words of LeVar Burton, “You don’t have to take my word for it.”

Oxcross is comprised of Andy Patterson on drums, Jeff Anderson on guitar, Taylor Williams on guitar and vocals and Dave Jones on bass. The band started about two years ago by what seem to be natural causes, as all of the band members are associated with each other through years of musical involvement in Salt Lake City. “We were all in hardcore bands back in the day, back in the early ’90s,” Patterson says. Perhaps the strongest force responsible for the incarnation of Oxcross, though, stems from Patterson’s recording studio. He says, “I got to know Taylor a little more by recording his other band, Glacial, which I ended up joining after a few years.” The same is true for Anderson, who says, “Andy has made most of the records I have ever recorded in any band I have ever been in.” When I ask how they landed on their band name, Williams says, “We initially wanted to call it Ox, and then we found that that was taken, and my old bass player T2 … knew that I was a Game of Thrones fan, and he just randomly texted me: ‘You should name your band Oxcross!’”

They all have rich and interesting musical backgrounds. Patterson and Williams both played violin as their first instrument. They say they both learned the “Suzuki method.” Jones says of his introduction to music, “My parents … didn’t listen to music. At some point, I started buying punk rock CDs because I liked the covers.” Williams’ dad is a musician who plays traditional Irish music, and Williams says his dad “has always supported [him] in music.” Anderson also comes from a musical background, and he says, “My dad raised me on a steady diet of fuckin’ prog rock … My introduction to Pearl Jam was from my parents.”

Patterson describes Oxcross’ live shows as “blue collar” and jokingly refers to their style as “power bottom.” Williams says, “I’ll attempt to make a few poor jokes—I’ll probably berate the audience a little bit.” They describe their music as doom metal with melody—Anderson says, “It’s doom to listen to when you’re sitting in a patch of sunflowers.” They declared Williams to be their primary songwriter, and Patterson says, “Generally, Taylor has a song and shows it to us, and we play it. If it sucks, we will fix it.”

Oxcross have yet to tour as a band, but they aren’t altogether ruling it out. Patterson says, “I’d like to tour—we’re all older and we have houses and some of us have kids and stuff like that, so it makes it a little harder to drop everything and go hit the road, but I’m always interested in playing in Denver or going out to California and playing shows.” They haven’t released any music to date, but they assured me that they were well into the making of it, and they projected that they would finish their album within a couple of months.

After talking to Oxcross, I was reminded of the importance of persistence. These guys comprise large notches in the backbone of not just the Salt Lake City metal scene, but the entire local music scene. For being such giants in the music community, it doesn’t take much to satisfy them—Patterson says of the band’s plans, “If there was some big band that, for some reason, [when] the planets aligned, wanted to take us on tour … we would cross that bridge when we got there, but as far as expectations, we don’t really have any. We just play shows and put out records and hope people like it.” They were also kind enough to edify me in general pop cultural matters: Patterson says “… that the lost sound of the ’80s is saxophone and fretless bass,” that “Gwen Stefani is an American,” and that Williams “ain’t no hollerback girl,” in either definition of the word.