Five dollars can get you a number of things, but only one night a month does it get you access to a live show with three of Salt Lake’s best up-and-comers. Indie surf-rockers Beachmen will be opening for the mind-expanding Polytype, followed by the party rock of King Niko. It’s all going down Friday, July 12, at Urban Lounge at 10 p.m., brought to you by Bohemian Brewery. It’s 21+, so if you’re underage or can’t attend, don’t forget to make use of GigViz.com for live streaming of the show! 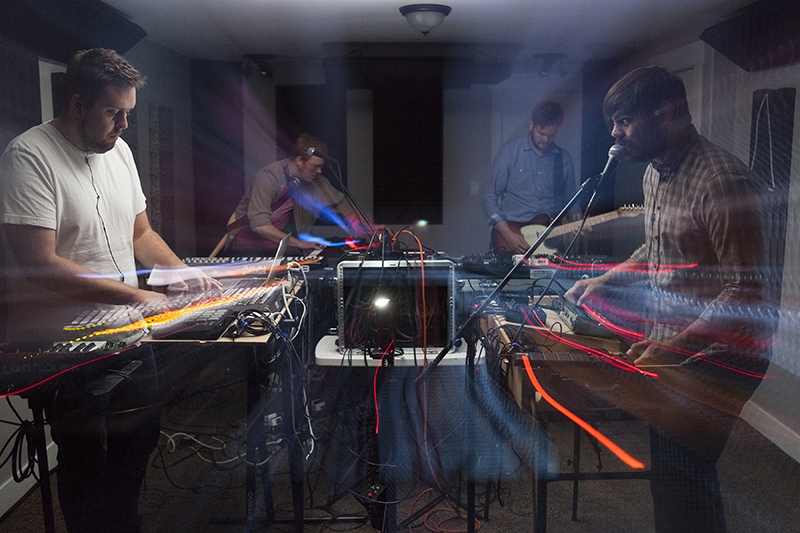 Five dollars can get you a number of things, but only one night a month does it get you access to a live show with three of Salt Lake’s best up-and-comers. Indie surf-rockers Beachmen will be opening for the mind-expanding Polytype, followed by the party rock of King Niko. It’s all going down Friday, July 12, at Urban Lounge at 10 p.m., brought to you by Bohemian Brewery. It’s 21+, so if you’re underage or can’t attend, don’t forget to make use of GigViz.com for live streaming of the show!

Polytype
Each band’s story of origin differs. Some begin out of boredom, and others seem to align out of fate. Polytype’s story is one that reminds me of a phrase that occasionally floats through my mind: Genius is born out of necessity. Band members Mason Porter (on synth and vocals), Jason Gibby (on synth), Jared Price (on keys) and Scott Haslam (on guitar) are from Provo. Polytype strictly avoid imposing a certain feeling upon their listeners. Instead, they aim to create a soundscape where listeners can form their own story and interpretation. Price says, “We wanted something people can really sink their teeth into. You know, lead them to the gate, but not give them the tour.” In my experience, this has been entirely true while listening to their recently released, self-titled debut album. I can only see shapes and lines when I hear their music. It’s as if a new portal of my mind is gently opened for exploration, and it’s very geometric. Their “open for interpretation” style is also evident in their music video for “Cyclone,” produced by Gibby’s little brother, Kyle Gibby. The video features a humanoid in an all-black outfit. As he roams through scenes of nature, he remains still as everything rapidly moves in reverse around him. It’s nothing short of a mind bender.
Porter, Gibby and Price played in an indie folk band (Dandy Lyon) just over two years ago. It was at the 2010 Fork Music Fest in American Fork that Haslam heard his future band members playing. Haslam was already a guitar player and approached Porter, having previously seen him around town. Both Haslam and Dandy Lyon were ready to take their skills in a new direction. This was the beginning of Polytype.
Each member of the band agrees that Radiohead is a collective influence. Price says, “For someone not into electronic music, [Radiohead] can open the door.” Radiohead is a fair comparison to Polytype’s sound. It’s not synth pop, and it’s not EDM, but it’s heavily oriented around electronic sounds, with guitar riffs added by Haslam. Price and Porter each wrote about half of the album’s lyrics. “I pay attention to vowel sounds and melodies. I want the words to fit nicely with the music,” says Porter. They assured me that each element of their music receives equal focus. “I wouldn’t sell our album as a book of poetry,” says Porter. When you hear the music, it’s clear the sound is not complete without the ghostly romanticism of Porter’s voice, and the lyrics only complement the sound. When I asked them if they would describe their music as dark, Porter responded, saying, “Our moms think it’s dark.” Price added, saying, “[But] We want it to get weirder.” Haslam described his motivation behind their unique sound simply as, “the excitement of making new noise. I just want to intrigue the listener,” he says. The guys spent over a year working on the album and hired local star producer Nate Pyfer, who has done work with The Moth & The Flame and Imagine Dragons, to complete the album.
Polytype’s overall aim is to create a viable electronic scene in Provo. “We don’t want to maintain a monopoly on the scene or anything,” says Haslam. They want more bands they can play alongside with for a well-rounded electronic set. Polytype admit they’re not the first with a synth-based sound to come out of their area. They mentioned Night Night as one band who has tried a more experimental electronic sound in recent years. What Polytype have going for them, more than anything, is timing. Haslam has a capable basement studio, each band member is committed to the life changes that will result from success, and, as Price mentioned, this is a fresh sound for the Provo area.
Polytype has some pure motives behind their music offerings, and anyone in attendance at their shows is a witness to that. The band has a West Coast tour coming up soon with Golden Sun—a testament to their dedication as a band. This is just one of the many growing experiences Polytype has ahead of them. Once these guys wrap up their tour, their music will be in much higher demand. Luckily for us, once the tour’s over, they’re going straight to work on their second album. Their sound is one that’s not only unique to the Provo scene, but to Salt Lake’s as well. The second album will definitely be one to keep your eyes peeled for, and if you haven’t already listened to the first album, then head over to polytype.bandcamp.com for something new and intriguing.