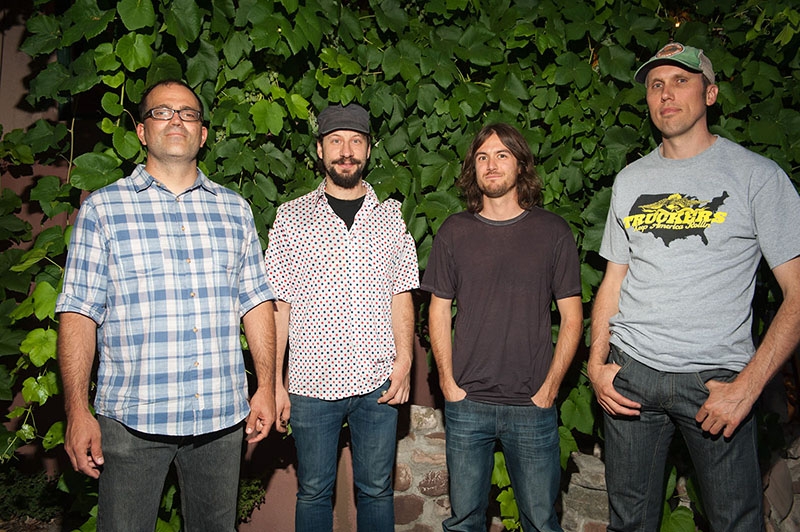 Localized: The Weekenders and The North Valley

Salt Lake City is set to soar through space and time on Sept. 20 with this month’s Localized, featuring the psychedelic sludge of The Weekenders combined with the classic blues rock quintet of The North Valley, alt-indie rockers The National Parks opening at 9 p.m. All who are 21+ can bask in this local talent with host Ischa B. at Urban Lounge for just $5. For those of you who are out of town, underage or crippled, you can still catch the show live at gigviz.com.

Before I sat down with the members of The Weekenders for our interview, their laidback vibes relaxed the atmosphere around us. These Salt Lakers make it seem as though it’s second nature for them to reconnect the hard work that goes into maintaining a tight sound, while performing in a way that makes the fun contagious.

As a personal witness to that which is The Weekenders, I must testify to the fun that is sure to be had while listening to them rock the fuck out. They will hit you with their sound first, and as their sludge permeates to your bones, you may find your head involuntarily swaying to the reverb. Their volume and togetherness is reminiscent of classic rock bands such as The Grateful Dead and The Doors, yet they stay modern enough to grab your attention, similar to a direction of bands such as Dead Meadow or Black Mountain. It is this combination that forces your attention, with the fuzz of stoner rock that you can still jam to, even if you’re sober.

While their origins trace back to around 2010, it was just this winter that the lineup was solidified into a collaborative effort. The group now consists of Rob Reinfurt (guitar, vocals), Mike Torgerson (bass), Shaun Thomas (drums) and Mike Sasich (guitar). Reinfurt was working on a record with Sasich, when Reinfurt recalls that Sasich asked him if he was in the market for a second guitarist. Reinfurt says, “I didn’t want to ask him because I thought he was busy with all of his other bands and his studio. Plus, I thought he was a little bit out of my league. He wanted to join, and so I said, ‘Yeah, for sure!’” After losing a drummer, Reinfurt posted an ad on Craigslist and had a few auditions before Thomas came to fit the bill. Thomas came in to audition while the other drummer was still playing. “That was really awkward … I was sitting on his stool, which I didn’t realize, so he couldn’t really leave, so he had to stay there and watch me play,” Thomas says. Although they appreciated the previous drummer, Thomas turned out to be a much better fit for the band, Reinfurt says. As far as bassists went, “It was like Spinal Tap,” Reinfurt says, with a rotating cast of bass players that frequently came and went. Reinfurt finally connected with Torgerson as a fill-in bassist for a gig in Provo.

Since then, the band has contributed in equal efforts. With a fluctuating lineup in the past, it was difficult to find a base to move forward from. “Now, we’ve kind of worked out where we’re going from here, and it’s more collaborative. I appreciate that, because that’s what a band is: collaboration. It’s not about one person doing everything, and people showing up and playing the music, which, in situations before, was kind of like that,” Reinfurt says. While the lineup alternated between various players, it was mostly Reinfurt calling the shots and telling people what to play. “Now, [the songwriting] is based off of a little bit more of a really simple, basic element, and everyone builds off of that. I’m not telling Shaun what to play on drums, what Mike should play on bass,” Reinfurt says. “Playing with these guys has definitely been the best experience that we’ve ever had collectively as a band.”

With this solidified lineup, the band hopes to play in front of a crowd of people who will appreciate the rock they put out there, and, most importantly, to have a blast while at it. The crew recently traveled through Colorado on tour, playing shows that tended toward emptiness, since no one had heard of them before. “But the sound guys liked us, the door guys liked us and the bar people liked us, and they hear music every night. So, to hear them give you good feedback, that’s something. We had a lot of fun!” Torgerson says. Reinfurt agrees with the sentiment: “Some of the best shows we’ve played have been for no people,” he says.

You can download their debut album, Don’t Plan On, for free on their website at theweekendersmusic.com, and make sure to keep a lookout for their upcoming album to be released this fall. Catching their set live at Localized on Sept. 20 will get you shaking, because their live performance will delight your ears and body.

Sitting with the guys who make up The North Valley, I was impressed with the adoration the crew held toward each other and other local bands. Dane Sandberg (bass, vocals), Spenny Relyea (guitar, vocals), Jon Butler (guitar), Kramer McCausland (keyboard) and Spencer Sayer (drums) are dedicated in their collaborative effort to create alt-country rock with intensity. Their jams are comparable to other local acts such as The Devil Whale and Holy Water Buffalo, whom, they admit, they are not ashamed to be compared to, as watching and playing with other local acts motivates them to continue working their asses off. “It’s cool because they’re local, so it makes it feel so much more doable … The logic makes sense somehow,” McCausland says. The camaraderie in the city is what fuels their music. “Everyone just pushes each other to do better and to have fun,” Sayer says. Drawing from these roots allows the members of The North Valley to advocate for their passion, as creating and performing are things they want to focus on for years to come.

The five knew each other from playing in a number of other projects and running into each other at shows, whether through performing or attending. Serendipity caught them when most of those projects ended at the same time, but they all wanted to continue creating music.  Sayer says, “We wanted to do something with certain people that we’d love to be a part of it, so we sat down and said, ‘This is who we want to play music with.’” With the five of them all out of a band, Sayer and Sandberg contacted the other three, and after one phone call, they got together to jam. With influences that stem from current acts such as Dr. Dog and Delta Spirit, the band combines that with older rock and roll, like Jimi Hendrix and The Beatles. “It’s impossible to get away from those classic influences,” Butler says, but it’s the local bands that still leave the biggest imprint on them.

As for the songwriting, the five-piece group works within a well-functioning system. “Spenny and Dane will start out with these acoustic, Neil Young–sounding songs, and then we all sit down and it turns into something a lot louder,” Sayer says. This process allows the songs to evolve into something greater than what was originally presented. Butler adds, “I don’t think we even have a song that sounds the same as when it was written. Once it comes to the band, it changes so much, in a good way.” The group trusts each other’s judgments to make it so that no one feels offended when something changes. According to McCausland, “It makes the songwriting process easier when everyone can contribute,” he says. Add to that, they’re an odd-numbered group, which allows them to vote on measures in a completely democratic way. “If two people have an idea and three people don’t like it, they’re kind of SOL. But, give it two weeks, and you’re gonna totally agree with them anyway,” Sandberg says.

Aside from drawing on each other for help and guidance with their work, the band recently turned to their community for support through a Kickstarter campaign to fund the costs of putting together their new album, Patterns in Retrospect. With an overwhelming number of donations, they were able to reach their goal one week before the deadline. Sayer, humbled by the experience, says, “It was kind of a weird feeling that people would just give you money.” Their fans have approached the band since the campaign ended, expressing excitement over the upcoming release of the album, as well as for the other incentives that were given according to the amount of their donation. The highest donation, a whopping $500, gives their buddy, Jason DeSpain, free admission to all of their shows, as well as receiving a private concert performed by the band—and he gets to choose where and when to have the show!

When I asked the group what their main motivation was, all five of them chimed in chorus: “LIVE SHOWS.” Practicing together is what can turn a shitty day into an awesome one for the band, but it is the love of performing in front of their friends and fans that drives them. With the release of their album, they plan on playing locally like mad. For updates on upcoming shows and information about their album, you can follow the band on their Facebook page, facebook.com/thenorthvalley. Sayer warns, “As soon as that comes out, we’re gonna be playing so many shows, you’re gonna get sick of us.” Once that happens, they plan to hit the road and play as many shows as they can on tour, until they get too old to play.

What The North Valley love most about performing is the intimacy it can provide between the band and the audience. They claim Kilby Court as a home venue, since that’s where they’ve grown and developed as a band, but any venue that encourages interaction between the stage and the floor is ideal for the group. Their set at Urban Lounge for September’s Localized will certainly allow this synergy to take place, as their rambling folk—delivered with high impact—will lift you off your ass.