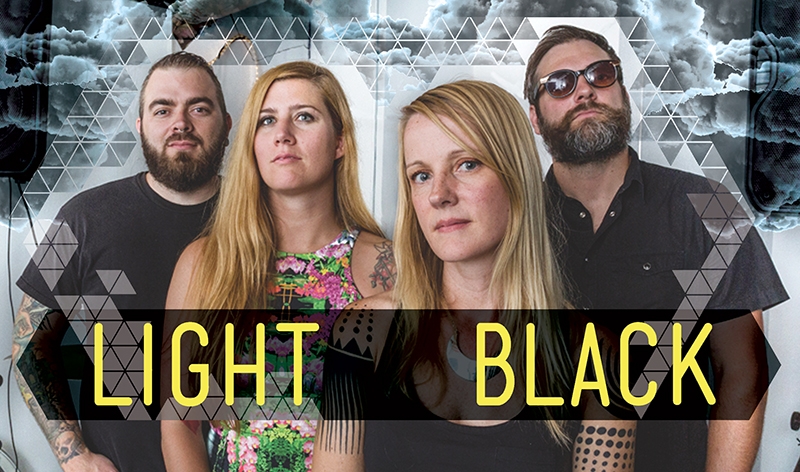 Dark and gloomy doom is the order of the day on Oct. 12. Come chill with the heavy, meandering drone rock of Dustbloom, and meditate with the melancholic vibes of Light/Black. Before all of that, get your groove on with the driving jam punk of openers Baby Gurl. Tickets are just $5, and the 21+ show starts at 9 p.m. at Urban Lounge, brought to you by Bohemian Brewery and hosted by SLUG’s Ischa B. If you are immobile or underage, be sure to catch the show on gigviz.com.

When the members of Light/Black talk about their origins, everything seems to circle around a single couch. Everyone agrees that Carri Wakefield (bass/vocals) was the first one to stake out her space on the couch, writing fragments of new material on an acoustic guitar. “I’ve played in previous bands where I sang or I played bass, and I was kinda taking a break from being in a band. I decided to [play again] because I was bored and wanted to and missed it—to write some acoustic folk songs, like ‘singing around the campfire’ kinda stuff,” she says. As the material matured and grew more refined, however, Wakefield found herself getting drawn back into writing music more seriously. Nowadays, Light/Black sounds like a mix of drone sound textures with a sludgy sense of melody.
Levi Lebo (guitar) joined her on the couch soon after hearing that early material, offering encouragement and helping her to explore this new musical space. Her close friend, guitarist Danielle Marriott, later joined in, Joshua Asher (drums) filled out the last spot on the couch and in early 2012, they decided to take Light/Black more seriously. “The real push is to hang out with buddies,” says Wakefield. This casual approach drives the band in a very real way. By not trying to take themselves too seriously, the band has found it easier to relax and play music that speaks to them directly. “It’s funny when you play in bands and you really try to push it, and then that just does whatever it does and then ends,” Lebo says, “but when you’re ready to just be on the couch and not try to push it, it’s so good that—” Asher cuts him off to say, “It gets you off the couch.”
The band tries to avoid pretense in describing their sound, preferring to simply refer to themselves as “loud.” They shy away from being categorized in specific genres, describing the project as dark folk—a response to their mellower, more minimalist rock style. This simplistic, no-frills attitude seems to remind them of their humble beginnings: a couch-born band without dreams of stardom, only a will to create something meaningful, personal and fun. Lebo says he would prefer people to listen closely to their lyrics rather than for the markers of a particular musical style. He says, “I would love it if someone said, ‘This line in this song was really awesome.’ Most people don’t say that. As much as people listen to and relate to lyrics, a lot of the time they’re just ignored.” The entire band collaborates on lyrical content, so the lyrics are especially important to everyone.
Talking about their experience playing in Salt Lake City, the subject of Ogden rises almost unconsciously. Their show at the Sand Trap on Aug. 17 seems to have gotten them thinking about the city and its potential future as another major music town in Utah. “We had a lot of fun playing at the Sand Trap, and I would play there again anytime,” says Asher. They seem confident that with more aggressive promotion, Ogden could easily support a big, successful music scene. Lebo says, “We would like to see more of that in Ogden. We’d like to see more bands play out there. They have a great all-ages scene that I’d like to play for.”
When they look beyond Utah, touring seems more like a vague inevitability than anything else and they are simply waiting for the right moment to do a quick West Coast tour. Light/Black released their self-titled album on May 24, and the band is now focused on writing and recording new material with the aim of releasing another album in the near future. Marriott noted that the band already has new songs written, and are working on more, saying, “At our CD release show, we played two songs that weren’t even on the album.”
The members of Light/Black seem content with the project as it stands and appear confident moving forward with new material. To them, writing music means more than just putting together songs and constructing melodies: Working together with friends to create something fun and personal drives everyone in the band to keep working hard. “All I want to do is hang out and write things that I like to listen to,” says Lebo with a nod. “I think that’s the most important thing.” Wakefield agrees, saying “As long as we can please ourselves and write music we want to listen to, we’ve accomplished our goal.”
Be sure to check out Light/Black at lightblackband.bandcamp.com and catch them at Localized!