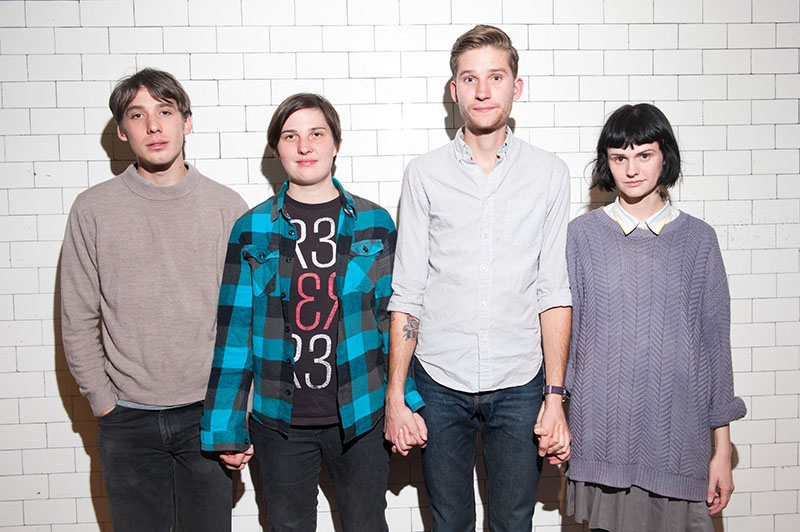 On Friday, Dec. 13, come to Urban Lounge for the warm, emotionally sophisticated dark pop of The Circulars, and get wrecked by Fossil Arms’ articulation of what tape hiss sounds like choking on glass—during shock treatment. Alexander Ortega, of Filth Lords and Editorial Assistant at SLUG, is the opener. Localized is hosted by Ischa B., tickets are $5 and the show is 21+. It begins at 9 p.m. and is brought to you by Bohemian Brewery. If you are unable to attend, are underage or on house arrest, catch the show on gigviz.com.

As an interviewer, an ideal conversation is one with a band whose members are obviously friends—not just a group of people who get together to play sometimes with nothing else in common. The members of The Circulars are visibly comfortable around each other, and would presumably be spending time together even without music as the primary cause.  Another uniting aspect is coffee, with The Rose Establishment acting as a meeting space for this interview—and place of employment for two members. They are approachable, friendly people. We had a laugh at Morrissey’s expense after self-serious songwriters were brought up, discussed the songwriting process, gear, band history and audience reactions thus far. They released a six song, self-titled EP on Sept. 28, which can be streamed in its entirety at thecirculars.bandcamp.com.
The template for The Circulars began to form roughly three years ago, with guitarist/vocalist Sam Burton and keyboardist Maxwell Ijams working on music after initially meeting at a Starbucks. After some time spent developing song sketches, the duo decided to put a full band together. Burton and drummer Cathy Foy had played together in The Awful Truth, and he met bassist Dyana Durfee through a friend, having heard that she played bass, and asked if she’d be interested in joining the band.
Regarding their compositional process, all of the band members try their best to address the intangibles that occur when something just sounds right. “Aesthetic is not as important as emotional sentiment,” says Burton. With this in mind, The Circulars’ music is still fully formed and aesthetically established. Though Burton and Foy both refer to the band’s sound as constantly evolving, the songs seldom feel “jammy” or like there’s much second-guessing in the performances. If early records by The Cure or Siouxsie and the Banshees are within your realm of interest—or if Wymond Miles’ solo work is in constant rotation on your stereo— The Circulars’ moody dream-jangle may appeal as well. Foy’s tight drumming, Durfee’s melodic bass lines and Ijams’ glacial keys form an ideal backdrop for Burton’s textural guitar parts and reverb-laden vocals—which are actually rather comparable to Morrissey’s.
Burton recalls that he was initially somewhat ambivalent about the recording’s release. He says, “Not until we had the mastered copy of the record did I really love it.” He explains that the reasoning isn’t simply the sound of the finished product, but the realization that there are “more people on the record than just us,” he says, referring to all involved in the recording and production process. The Circulars EP was recorded and mixed by Andrew Goldring, mostly live, in one short session and with some overdubbing by Burton. The recording was mastered by local musician and studio professional Matt Matteus. Burton says, “He’s exceptionally talented, so we got lucky.”
As a bit of a gear buff, I ask everybody about equipment and am glad to find that they share my interest. Foy’s drum kit selection includes a Gretsch new classic and two vintage Ludwigs. “I have a tendency to collect a lot of stuff—even guitars now,” says Foy. Ijams runs his synths through Ableton software, and Burton’s collection includes a Danelectro 12-string electric and Hagstrom HJ500 hollow body, as well as several Fender guitars and amps and a battery of pedals. Durfee says of her setup, “I have the same Godin electric bass that I’ve had since I was 15, and play with flatwound strings.”
Concerning favorite venues and memorable shows, all band members agree that the album release at Urban Lounge was a highlight. Audience reception has also been quite positive overall. Durfee says, “People have treated us well everywhere.”
Burton refers to his bandmates as musical inspirations. He says, “We’re all in two bands—when you surround yourself with people playing music constantly, and talking about it all the time, it’s hard to not be inspired.” In addition to solo projects, The Circulars share members with bands such as The Awful Truth and Foster Body.
Current and future aspirations, Burton says, are to “make good records,” and “play as long as we like each other.” Durfee says she’s just excited to see what’s next. When the EP was released, according to Durfee, the band had “already moved onto other songs we were really stoked on,” she says.
For Burton, being part of Localized is “really flattering. It’s nice to be acknowledged,” he says. “I really like what SLUG does for the community and that they highlight local bands.”