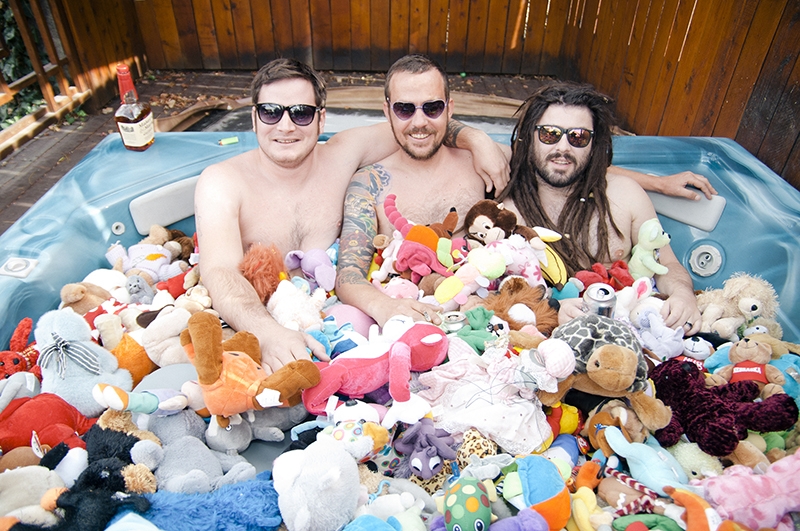 Yaktooth are completely in their element ’round a truck in the parking lot of their practice-space building, Downtown Music, swilling Natty Lights. They are earnest and unpretentious musicians who founded and discovered this musical niche together in January 2012, and released their debut album, Consensual Healing, on Feb. 7 of last year (recorded and mastered by Andy Patterson). Drummer Whil McCutchan says, “A lot of those songs were written while we were trying to cut loose from being super concerned about what we were doing and making enjoyable music for other people.” He was previously in Long Distance Operator with guitarist Josh West, both of whom also played in Lazy Billy and the Pillows with bassist Evan Anderson. “Both of those bands just ended up dissolving randomly and uncomfortably,” says West, “so the three of us left to vamp together.” After being what Anderson (also of Dead Horse Point) calls “band supporters,” playing “other people’s music,” these founding three members feel liberated with the music they now play in Yaktooth. Anderson says, “When we started this, it was finally like, ‘Alright! I’m doing whatever the HELL I want.’”
Though Yaktooth are a “heavy” band, their sound initially derived from jam output. “It was the worst struggle at first—it was so awkward and uncomfortable,” West says. “We’ve all been fans of heavy music and everything, [but] we didn’t plan on that; it just turned out that way—it’s just what came out of us.” What has resulted is a “heavy” amalgamation: Consensual Healing features math-y, slightly dissonant guitar noodling that punctuates sludgy riffs, with screechy vocals flashing at irregular intervals. Their math-informed instrumentation calls to mind the corybantic guitar work of Form of Rocket, but it’s tempered by a stoner metal sensibility with the grooving propulsion of Tolchock Trio. West says, “Local music in general is a huge inspiration for us.” Indeed, Yaktooth embody a Salt Lake sound carved from Kilby Court’s aughts days, yet stand out as being fresh due to their experimental nature: “We’re way bigger fans of the stuff that isn’t ‘tr00 metal’ ’cause we’re too fuckin’ weird for the metal kids and we’re too heavy for the indie kids, so we have a weird place, but I feel like that’s where we belong,” says West, who cites Iceburn and Smashy Smashy as personal influences.
Yaktooth mainly include the core rock instruments of guitar, bass, drums and vocals, but enhance their sound with a vocal-effects processor: “Wrustle,” the final track on Consensual Healing, exhibits wheezing, alien-sounding vocals and, later, droning vocals that sound akin to kargyraa-style throat-singing. West says, “I can sing, but I’m better at yelling, but we don’t want to yell all the time. It got to the point where [we were] like, ‘What can we do to really twist up the vocals and make them weird?’ So, we bought a vocal-effects processor, and that’s what we use!” This addition underpins some of the zany characteristics of Yaktooth’s sound, and their live persona furthers their quirkiness: They initially played in “teeny” white shorts only, and their opening performance at Localized last April could be described as being possessed by the spirits of North Dakotan truckers—kind of scary. McCutchan says, “It kind of makes you uncomfortable, but you’re OK with it.” Yaktooth have diluted this aspect, but still maintain an appropriate amount of eccentricity to keep it interesting.
Another element that adds to Yaktooth’s weirdness is their approach to lyrics: “Lyrics were never important to us ’cause no one in Salt Lake can understand what you’re saying when you’re onstage in your heavy band playing at fuckin’ Burt’s,” West says. “It’s just how it comes across.” Yaktooth grafted nonsensical, almost-gibberish lyrics—sometimes in Spanish—onto the songs on Consensual Healing. For a new album they are writing, they will still steep its language in arcane symbolism, where “what’s going on” won’t be clear—however, it will contain a narrative arc. West says, “I don’t want to call it a concept record—it’s a story record. It’s a story about something that really happened mixed with some mythology. We have taken [lyrics] a lot more seriously lately, if only for the fact that we have to tell a story …” Expect this album’s release in February or March.
Yaktooth recently toured the West Coast to enthusiastic crowd responses, sharing bills with the likes of Gaytheist and Teeph, and formed friendships with touring bands for whom they’ve opened in SLC to form a good footing for said tour. “We’ll definitely go on the road again,” says West. They are judicious about the number of local shows they play in order to uphold their drawing power, but when they do play, you can catch them at The Boys’ House, Salt Haus, Shred Shed and (maybe) Willie’s. Listen to Consensual Healing at yaktooth.bandcamp.com.
Regarding Localized, Yaktooth couldn’t be happier. West says of Baby Gurl, “They’re our fuckin’ brothers,” and of Die Off: “We love Die Off—those kids are fuckin’ awesome!”