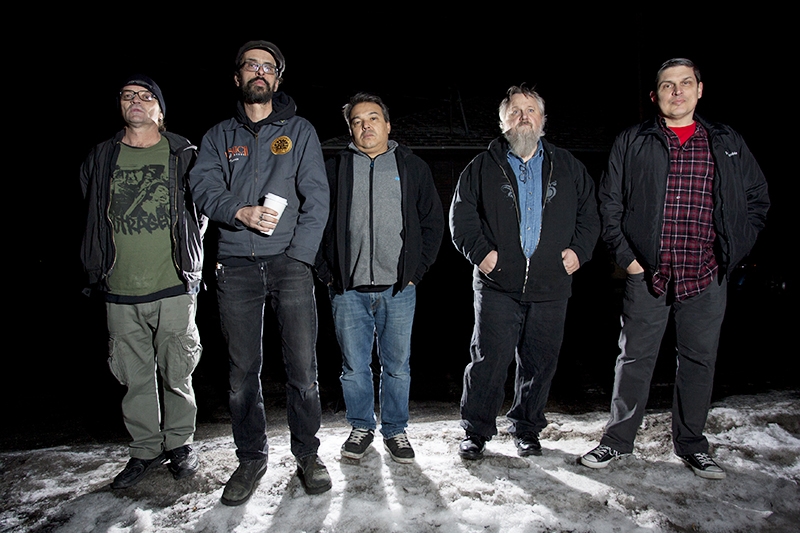 This month’s Localized is a meeting of veterans of Salt Lake’s original punk scene and the new breed of local soundsters creating their own musical voice—the experimental, dub-influenced Muzzle Tung open. The Guard Cats have existed barely a year, but they display a diverse sonic palette. On the other end of the continuum, Gnawing Suspicion was one of the first Salt Lake punk bands coming out of the mid-’80s. This inter-generational insurrection will take place Feb. 14 at Urban Lounge at 9 p.m., emceed by Ischa B. and sponsored by Bohemian Brewery and KRCL. It’s $5 to get in if you’re 21+.

The members of Gnawing Suspicion are some of the original Salt Lake punks. “I didn’t really get into it in the ’70s,” notes drummer/guitar/vocalist Aldine Strychnine. “I was still kind of a hippie. I moved here from upstate New York, heard Brad Collins’ show (“Behind the Zion Curtain”) on KRCL, and it awakened me.” Ron Ward (metal percussion, drums) met Collins at Cosmic Aeroplane, then started listening to his show on the radio. Ward had his own show called “No Guarantee.”
Guitarist/vocalist Davey Parish recalls, “I was first exposed to Devo and Fear on Saturday Night Live, like a lot of kids. But then I stumbled upon Dead Kennedys’ Fresh Fruit For Rotting Vegetables at Budget Records in Logan when I was about 16, and it just kinda snowballed from there.” Travis Nelson (drums, metal) started tape-trading in junior high with friends. Bassist Dwayne Finley started listening to Collins, too. He “started staying up listening to this weird radio show on Saturday nights, then Tom Sin got me listening to Clash records,” he says. “I took the bus to Raunch Records and saw Maimed For Life at the park one day.”
Aldine saw a performance by Survival Research Laboratories, and their remote-controlled robots would have an impact on Gnawing Suspicion’s “industrial punk rock” music. “[SRL’s] Mark Pauline was going around finding ‘Obtainium’; whatever big sheets of metal they could find to make those things. We did the same thing: We had a big, huge sheet of metal we used to use. That was back in the old Painted Word building, back around 1983–4.” That was around the time they started playing.
Parish chimes in to say, “It wouldn’t have happened without that building, Positively 4th Street. A lot of these guys lived by there and had studios there for years, and I wanted to play with them.”
Aldine continues, saying, “We just started making noise and banging on things, and got this big sheet of metal and mic-ed it up and put these phase shifters on it. We had this little bass that made whale sounds. It was pretty insane. Later, when Davey joined, we actually had songs. We had a few other members, like Jim Oughton. Rest his soul—he’s gone now.”
Ward describes their attitude: “It was a mixture of art and anger,” he says. It was the heyday of industrial music in the ’80s, and they played with local bands like the Clocks and Dr Naugahyde. There weren’t a lot of touring industrial bands, so they ended up on a lot of punk bills, opening up for NoMeansNo and even the The Flaming Lips once, back in their raw, early days. They each were in a lot of different bands back then, and Finley ran some underground venues like the Hate House, where his band, Hate X9, often played.
Gnawing Suspicion’s sound gradually changed to more conventional song structures, though they still incorporated the noise, the metal, sparks produced by a grinder and fire-blowing.
Parish has written most of the songs. He says, “All the songs, with a few exceptions, are from back then. One of the first ones was ‘Adam Swapp’ [about the polygamist who was imprisoned for bombing an LDS church in 1988, and was paroled last year].” The new and old songs combine, forming a sound that’s like an old-school punk band playing in a foundry, pounding out angry riffs to the clanging of metal.
“Brigham Young’s got his back to the temple—he’s got his hand out to the bank/You’ve got to be a Mormon here if you want to have a good social rank. Whose underwear is under there?” Parish stole the last line, and song title, from an old Hanes commercial. New song “Attack of the Drones” takes on a more current issue—robotic NSA surveillance drones. “With everything going on in the world, we’re even more pissed off now,” says Aldine.
Since Parish had health problems several years ago, he had to take time off, but rejoined in 2012. Gnawing Suspicion is inclusive of two separate bands in addition to itself: The more hardcore Maimed For Life has picked up steam, and the remaining musicians also formed the reggae/dub-tinged Suspicious Sound System, with Michelle Stark on vocals. Aldine says, “This was always like a songwriting lab, and it’s helped Maimed For Life come back to life.”
After SLUG Magazine founder JR Ruppel released his City by a Dead Lake compilation, Finley released his Dead City By A Lake comp in 1988, on which both Maimed For Life and Gnawing Suspicion appear, and which is being re-issued. The band hasn’t released anything else, but is working on some new material for release. Aldine has also produced the With A Little Help From My Friends music festival near Torrey for three years. You can check out Gnawing Suspicion at facebook.com/GnawingSuspicion.