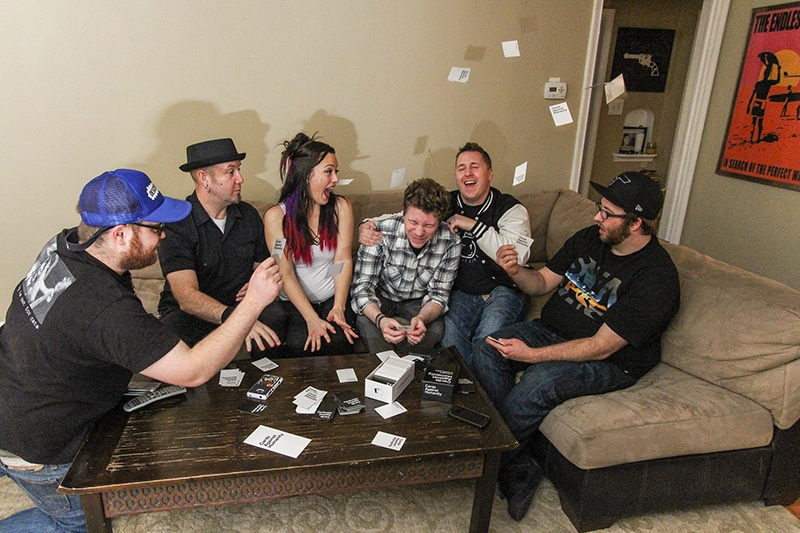 Ska punk really hit its stride in the ’90s. The bright, energetic horns and party-ready guitars reverberated into the mainstream for quite a few years with acts like Reel Big Fish, Less Than Jake, The Aquabats and others trumpeting their way onto pop radio. The golden age of ska has ended, but the genre is anything but ready to peep out a swan-song. A handful of exceptional ska acts still thrive, playing to devoted fans who never want to see the trumpets permanently muted. Among them, you’ll find Bombshell Academy.
Singer Ashlie Long explained that Bombshell came about when her previous band and Localized alumni Radio Rhythm Makers quietly dissolved. “I couldn’t find anything I fit into around town, so I put out some KSL adds and some stuff on Facebook like, ‘Yo, Universe, hook it up,’” she says.
Soon, she saw an email from another ska addict, guitarist Brian Mackay. The two had lived in California and both had an affinity for California punk and ska. Mackay shared some of his music with Long, tracks he had written and recorded by himself. “I clicked play and about shit my pants. I was like, ‘Where have you been? Are you kidding me?’” Long says.
The two started practicing right away and began recruiting other members, like drummer Tyler Smith, to fill their sound, though they weren’t certain what sort of sound to aim for. “We weren’t sure if we wanted to go more ska or punk at the time, but once we got the horn section down, it was all over: We were ska,” says Mackay. The band brought in new members, recently replaced their former bassist with Rhett Malachowski, and solidified the brass section with trumpeter Erik Vorkink and sax man Rich Oliver. “Rhett came in like a week before a show and saved our ass. We stole Erik from The Anchorage,” says Long. With a now solid lineup, Long and Mackay will celebrate the two-year anniversary of starting the band this May.
A six-piece band certainly carries challenges smaller bands might not have, and although the group is larger, they find it surprisingly easy to rally the members and practice. “When we were looking for members, all we wanted were people who were competent on their instruments—they didn’t have to be super awesome—and were dedicated,” says Mackay. Smith also noted the importance of finding new members who aren’t douchebags. It’s fair to say that they’ve found a dedicated group with members who show up when needed, regardless. “These guys will show up even when they’re sick. Not a lot of other bands have that,” Oliver says.
Not only are the band members dedicated, they also mesh well. Long mentioned that, although she doesn’t play an instrument, Mackay understands her: “I know what sounds good and what doesn’t. Brian gets me when I say, ‘Play this thing,’” she says.
Song ideas themselves come from all over. “It’s very organic. I had a conversation with a friend one night that didn’t go well, and boom, a song was written,” says Long, who also said it’s important for band members to be open. “The only rule is you have to be flexible. If somebody plays something and it doesn’t sound right, we all agree to be open and honest. Everybody has a favorite song and a song they hate, but if someone else loves it, I’ll sing it. You have to compromise a little bit and everybody is good at not giving a shit—if it works, it works,” she says.
Bombshell Academy play a no-nonsense brand of ska that bears resemblance to acts like No Doubt, Save Ferris and Dance Hall Crashers. While some bands scoff at comparisons to other bands, Bombshell embrace it. “It’s funny because, for a long time, I was told we sound too much like [other ska bands]. But you know? We don’t. We all grew up on something—we all had stupid posters in our rooms covering the walls. We all wanted to be somebody, so who cares if you kind of sound like somebody else. I think it’s awesome—I’m glad we get compared to those people,” says Long.
Ultimately, Bombshell are keeping ska alive in a world where ska fans can’t always find the fresh music they crave. Luckily for fans of the genre, Bombshell’s upcoming album, Skaholics Anonymous, is a love letter to those who need to scratch the ska itch. “Maybe ska was something you got addicted to back in the ’90s, and now it’s not so available, so you’re addicted and can’t find it,” says Mackay. The golden age of ska might be over, but that’s not to say it’s dead. As Malachowski puts it, “Ska is alive. Is it alive and well at this point? I don’t know. Maybe the fourth wave still hasn’t come. I think we’re just about due.”
You can sate your ska craving by checking out Bombshell Academy’s  website at bombshellacademyband.com.