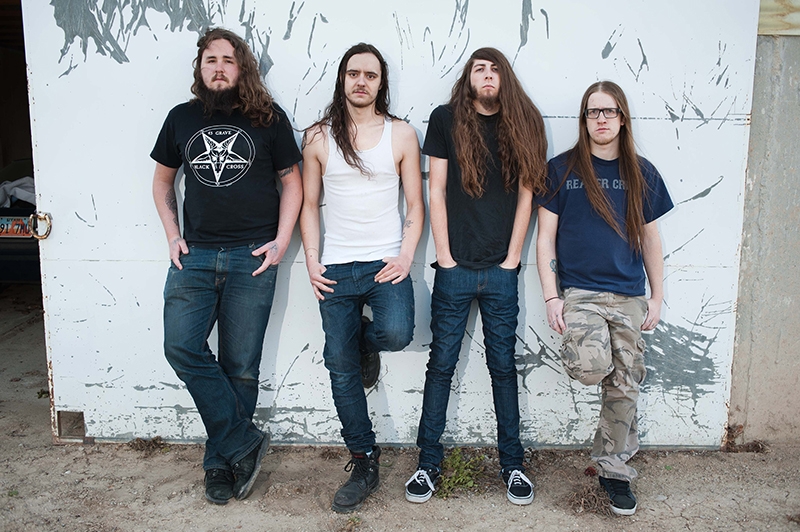 Sometimes, one must sit back and marvel at the variety of music—especially metal—that exists in SLC. SLUG is proud to tap two bands who represent different faces of metal: power-proggers Disforia and Western thrashers Dead Revelator. Come see them and Founders of Ruin at June’s Localized showcase at Urban Lounge on Friday the 13th for a measly $5! The show is 21+ and sponsored by Fat Tire, Spilt Ink and KRCL 90.9 FM.

While Salt Lake’s metal scene thrives on its variety, there hasn’t been a band that has so starkly represented the city’s unique roots as Dead Revelator. The band introduces an engaging mix of traditional rock and metal elements with a Western tinge, which is a description that is hard to quantify if you haven’t heard it. But it exists, a distant cousin to the popular Southern blues tradition of bands like Down and Crowbar. According to guitarist Graeson Thorpe, where Southern metal pulls from blues, Western pulls from classic country traditions. The result is metal made just for the frontier-taming, gun-slinging, fiercely independent crowd—the descendants of the Wild West. It’s metal tailored to Utah. “I just love country guitar, and it bleeds through in my writing process,” says Thorpe. “Something about bending a major third to a perfect fourth has this really twangy, unique country sound, and I use that a lot. I figured it was more unique.”

The band began with longtime friends Thorpe and drummer Nate Dahlquist, who have been jamming together since eighth grade. They both enjoyed playing in different bands over the years and, after a short break, decided to come together to build a new project. They scoped around and found bassist Brendan Greene, who had just left Disforia. They happened upon their now ex-vocalist AJ Bell at a show they were playing sans vocals—who meshed well enough with the group to record on their debut album, Concrete Law, but wasn’t a good permanent fit. The rest of the band had already considered high school friend and current vocalist Chad Anderson as their go-to backup. Anderson, who is also a guitarist for Disforia, accepted the offer­­, drawn, by the uniqueness of the group’s sound. “When I heard it, I was like, damn!” he says.
For Greene, the band’s individual palates are part of what contributes to their unique sound. “It’s kind of in the middle of what we all listen to,” he says. “I love punk, Chad’s into power metal, everyone’s Pantera background—it’s right smack dab in the middle, and every one of our ideas works out because of that.” The band also says it enables everyone to contribute to every instrumental process with ideas and experiments. Generally, Thorpe begins the songwriting process by bottling inspiration when it strikes him, then meticulously repeating new riffs as other ideas begin to organically pop up to fill in the blanks. He brings these longer pieces to the band, and then everyone begins their own building onto the skeleton. Concrete Law’s tracks are a sort of violent romanticism for the Wild West, and include some inspiration from Stephen King’s epic Dark Tower series.
The band says their next album, which they are currently working on, is going to be hunting down bigger prey. “The new stuff we’re writing, the lyrics we have so far—I keep describing it as a kind of Slayer approach. We’re not necessarily talking about any big groups or idea that we don’t like in general, just the ugliness we find in them,” says Dahlquist. On their first album, the band was careful not to alienate any potential fans until they had really grown into their skins and figured out who would be listening. Now that they’ve got a better idea of their fanbase, the gloves are coming off. “It’s a lot darker, this album. We wrote a song about Mormonism and an occurrence at BYU where they tortured homosexuals with electro-shock therapy. Sixteen out of the 17 who went through the program ended up killing themselves,” says Thorpe. As the band progresses with their sound and identity, they are also solidifying that distinctively Utahn perspective, choosing to put their focus strongly on the city’s most powerful Mormon overlords. But the album isn’t going to be one of pure anger—they are also exploring more uplifting ideas. “Another theme on this album, too—not to sound cheesy—but it can actually help people. If you’re lost or depressed or not in a good place, you can find hope. So it’s kind of like a heavy metal bible,” says Thorpe.
The band is planning on releasing a small EP at the Localized show, which is the debut recording of Anderson on vocals, a mix of three redone tracks from Concrete Law and one new track. They are hoping to have a full-length with Anderson done toward the end of this year, as well. They already have seven songs finished, but don’t want to rush production or sell themselves short. So they are taking time to build up more material. Like many other sweet bands in the scene, Dead Revelator are polished in their presentation and are hungry for success.  “We all want to tour—we all want to take it as far as we can. It’s all so fun, living the dream every day,” says Greene.
You can follow Dead Revelator on Facebook at facebook.com/DeadRevelator, Bandcamp at deadrevelator.bandcamp.com and
Instagram @deadrevelator.