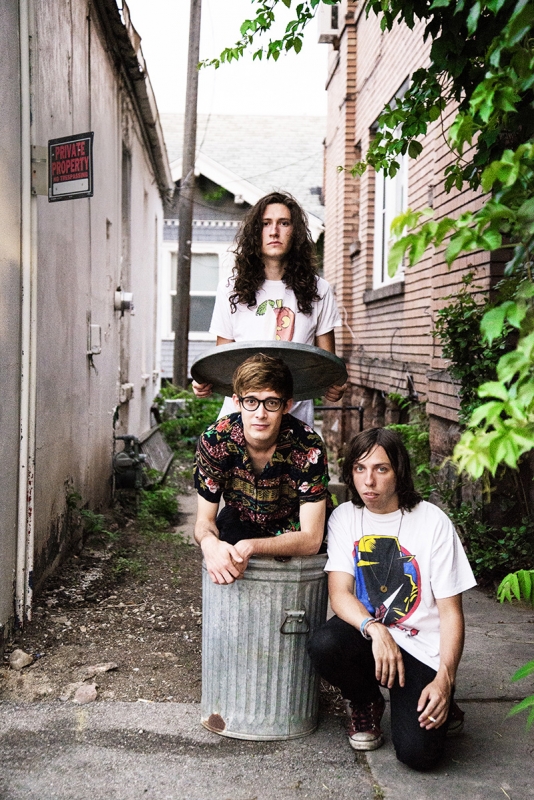 “We don’t have band practice,” Craig Murray, Koala Temple guitarist and vocalist, says with a shrug as he describes their musical process. “Nothing feels better than going onstage and playing something that you don’t have planned out entirely.”

It’s one thing to enjoy a bit of spontaneity onstage—it’s quite another to fully commit to the idea of stream of consciousness while playing music. Koala Temple wrote and recorded the entirety of their first album, Did You Like A Puppy? in one inspired, delirious night in Midway, Utah. They tracked all of the instruments in six hours, writing lyrics and melodies on the spot. “We’d go out for a smoke break, and then come back in and write about what we talked about on the smoke break,” says drummer Taylor Clark. “It was truly a spur-of-the-moment startup.” When it came to choosing a name, they had a Word document open with hundreds of ideas, and randomly picked Koala Temple. Other names on the list included: “Bean@yahoo.com” and “Church Or Something.”

Their investment in remaining open and flexible makes their music rich, intrepid and a bit esoteric. There is something quite Hunter S. Thompson about the sounds they create—their latest release, Blue Milk, could be the cassette tape playing in the stolen white Cadillac rental car from Fear and Loathing in Las Vegas. While it would be easy to associate Koala Temple with the sounds of ’70s or psych rock, their music is more than that, simply for the fact that it is coming straight from their uninhibited minds. As bassist Josh Brown puts it, “We’re not pysch rock, but if someone wanted to take psychedelic drugs and come to our show, they’d probably have a great time!” It’s hard to disagree with him. For example, when asked what their set would be like if they had $1,000 to blow, Murray announced that he would buy, “500 Betta fish and a big-ass, hanging tank,” while Clark chimed in to say that they would go Oprah style—“A Shania Twain CD for everyone!”

Having played together for about two years now, Koala Temple have received local recognition and have even been picked up by some online music blogs. The positive fanbase seems to come as a bit of a surprise to these guys, who claim to have never put any effort into marketing themselves. Taylor says, “We avoid the business side completely. We don’t self promote. We like to put it out there and let it go. It’s not a decision—we just don’t really think about it.” Murray adds that he once traded a guitar pedal for a off-the-cuff recording session. “You can’t take it too seriously,” he says.

Musically, this philosophy translates to never being complacent. Murray puts it bluntly, saying, “I haven’t truly liked anything we’ve put out … but I don’t dislike it.” It’s tantalizing to imagine what the unrealized musical landscapes of his mind must sound like, but your guess is as good is his. All Murray knows is that “Letting yourself go is key to making something a unique experience,” he says. “It’s my way of making music that’s not boring, but still a little bit out there.”

Blue Milk was mixed and recorded by local up-and-coming audio engineer Andrew Goldring. In much the same fashion as the first, nearly all of the songs were made up on the spot in a live jam session. “We can’t say enough good things about working with Andrew. He’s fast, efficient and clear-minded. He puts his stamp on without encroaching. Plus, he’s got a baby face we can’t resist,” Clark says.

Murray and Brown are not classically trained musicians, but Clark took lessons for most of his childhood and teenage years. “Without Taylor playing drums, the band would not be the same band at all. The structure is reassuring. He never fucks up,” says Murray, joking. All of the members of Koala Temple also play in local band 90’s Television. Brown says, simply, “We just like to make different types of music.”

Koala Temple’s keyboardist, Andrew Sato, has been on hiatus, but is expected to return for the Localized show. Murray describes him as “a futuristic, surrealist painter—the best on the planet,” he says. “His contribution is more surreal and ethereal. The way he plays keyboards is like painting on the canvas.” Clark adds that Sato once said, “Koala Temple is a wave, and I just get to ride it.”

You’ll be able to ride the wave and hear new, spontaneous music from Koala Temple for $5 on Aug. 15 at Urban Lounge. Check out their Bandcamp in the meantime: koalatemple.bandcamp.com.