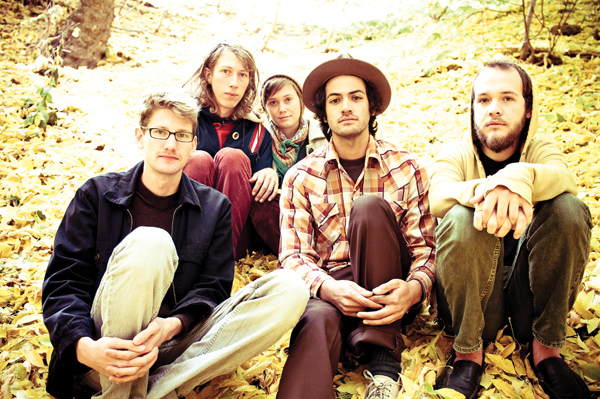 This month SLUG’s Localized bring you the folkie-blusey psychedelia of Aye Aye, twee pop from Sleepover and opening band The Kidneys. It all happens on Fri. Nov. 13 at The Urban Lounge. Five bucks gets you in.

Aye Aye calls Davis County, an area that’s been spawning amazing tripster bands over the last several years like Paper Cranes Collective, WYLD WYZRDZ and Navigator (all of which have contained members of Aye Aye), their home.  After hearing Aye Aye you might think that this band was comprised of older men that have seen more than their share of blotter, but they’re young and still eligible to go on a mission.  Influenced mainly by the folk stylings of Bob Dylan and local group Seven Feathers Rainwater, they don’t just make music—they craft it, on stage and in the studio.  Last year they released an EP (Sly Ayes’ Congregation) and an LP (Saint Delay and the Golden God), both filled with loose but very precise songs that deserve to be in anyone’s collection.

Aye Aye sounds like a folkie-bluesy psychedelic band—think Beck circa One Foot in the Grave.  One of the best local songs I’ve heard this decade is the second track off Saint Delay and the Gold God, “Millions.” It sounds like a hillbilly acid stomp on Antelope Island: very rustic and western and also a great song to hear live.  “I’m working to be psychedelic, but I don’t think everybody can do that,” remarks Alba. It’s a goal for him that he thinks is still a few years away.  “It’s almost like a jam band at times, but most of our recordings aren’t like jams,” adds Biggs. “It’s very tight, but not too tight.” Since their inception, Aye Aye have gone with minimal practices and have played shows with as few as three members. Aye Aye is still experimenting and trying to find and perfect their sound. With a full band or not, they make some unique, trippy music rarely attempted in the local scene.

Currently, Aye Aye is in the studio working on a new album to be released before the end of the year and next year they plan to head out on their second tour. The idea isn’t to get rich by making music, but to go out and share their craft.  For a long time Andrew wanted to be a painter and it affected his take on making music.  “It’s just so tangible to me. [In painting] there’s a color scheme to affect a certain mood. I think with music there’s different structures to get into a different mood…” Andrew trails off. “What was the question?”  Aye Aye’s artistic vision is a refreshing take on making music compared to so many bands you see on the web just looking to make music to get popular, bang chicks and make phat cash. You know, douchebands.  Aye Aye is very grounded and humble. They just want to make cool sounds for the masses—or for just whoever shows up The band’s first non-local venture was a west coast tour in 2008 in support of their Saint Delay and the Golden God, which Alba says they “just kind of threw together” two weeks before they left town.  “It was really easy going, we did a lot of camping,” remarks Alba. “It was more of a camping tour.” The best show of the tour was a house party in Bellingham, Washington.  What made it so good wasn’t just the large crowd, but how diverse it was.  With a wide range of bands representing different genres, the crowd was something of a melting pot of their fans and friends enjoying everyone that played.  A scene like this might not be something too common in Salt Lake, but maybe it’s not a common happening in Bellingham either.  It did make the tour feel like a success and inspired Aye Aye to get back out on the road again.

The last thing I have to ask every band is about any encounters with groupies that may have occurred on tour.  “I don’t think we play the right kind of music,” laughs Biggs.  “Actually there was one, it was in Bellingham actually,” Alba adds. “The most forward girl I’ve ever met, very persistent. She bought the CD after we played and then started being really forward,” he says with a grin. “I told her no and she said ‘what did I even buy this for?’” Aye Aye might not think they’re playing the right kind of music to pick up the ladies, but I disagree—they have a very sexy fall/winter sound.  To sample Aye Aye’s music visit www.myspace.com/ayeaye2 and their live performance from Not a Side Show on KRCL can be found at circus.libsyn.com.

“We’re twee as fuck.” One probably wouldn’t associate that kind of confident vulgarity with the super cutesy indie pop offshoot of twee, but Sleepover singer/songwriter/guitarist Peter Worden’s assertion makes the sometimes-maligned genre seem legitimately bad ass. Before this email interview conducted with the newly formed Farmington/Provo/Salt Lake band, I had no idea what twee was, but the enthusiasm each member shared for the genre and for the music they are creating was definitely refreshing. “We are a twee band, and we pretty much just play twee music,” said bassist Braden McKenna. “Ya know, simple 90s pop songs about crushing on girls you’ll never get.”

Sleepover has only been playing shows since August, but McKenna and Steven Walter grew up with each other and have been playing music together before they were even in real bands. “Every day after school in 9th grade we’d play punk rock in [Steven’s] basement for hours.” Since then, McKenna and Walter have been part of various musical projects, including Aye Aye. McKenna is the mastermind behind the experimental ambient music of WYLD WYZRDZ and the stylistically schizophrenic Navigator while Walter helms the one-man garage band Ronald Raygun as well as Kalnas, which he describes as “a doom metal thing.”

When McKenna discovered that Worden was as fanatical about twee as he was, it seemed only logical to introduce him to his and Walter’s musical cabal. “I remember me and Braden having a few conversations about Tiger Trap, and somewhere after or before that I found a Go Sailor 7”, which made me really want to be as cute as Rose Melberg. So me and Braden pitched the idea of having a twee band to Steve, and he was into it.” Worden says, “We were in a noisy 90s band, which dissolved pretty quickly. I started writing some songs for a solo project, Cousin Songs, but it was way depressing. Somehow, these adorable falling-in-love-with-cute-girls-then-letting-them-break-your-heart-because-you’re-such-a-sap songs started pouring out.  And there you have Sleepover.”

It was clear to the members of Sleepover that they had natural chemistry. Since forming the band, it has become the primary musical project of all of the members. “All our other projects are pretty casual and basically personal projects that we get our friends to help us out with, but Sleepover functions like a real band,” says McKenna. The band practices weekly (though they admit much of the time is spent consuming Mexican food and watching Richard Pryor movies) and has played a number of shows at Kilby Court in their brief existence. The band doesn’t have any recorded material as of the writing of this article, but expect that to change soon. “We have twelve songs for our debut album ready to record. We’ll be doing that during the first half of November,” Says McKenna. “Our plan is to shop it around, see if we can get anyone interested in releasing it. If not, we’ll self-release it through our friends’ labels as usual.”

Sleepover comes from a unique place both musically and geographically, and, as such, perceive Utah’s local music scene differently than most of the Salt Lake-centered community. “I don’t think too many people even think about Utah’s music scene in the first place. There are a handful of super amazing bands from the area that even locally get no attention,” McKenna says.

“Salt Lake is an urban center, by virtue of that fact people from up and down I-15 meet in the middle. I live in Provo, but is seems like every week I am playing in Salt Lake.” says Walter, “There are some really popular bands in Utah that most alternative Utah media outlets (SLUG included) don’t know about, or don’t write about, because these groups don’t have the sound that they are looking for.” Even though they’re cutesy on the outside, Sleepover is indeed pushing preconceptions of what valuable local music sounds like and where it comes from.

Despite their newness, the members of Sleepover have big plans for the future. Besides the aforementioned album, the band is planning a tour for next May. “One of the plans for Sleepover is that, while on tour, we’re having a competition to see how many girls we can make out with.” says Worden, “Oh, and if we play house shows, there’s an understood commitment on our part to have a sleepover at the house that night.” As for what to expect from the band’s Localized performance, Worden described the band’s collective mindset thusly: “We just have fun, and think about cute things like taking naps in the sun, and kittens and napping with kittens in the sun, which does pretty well to set the mood.”

“I guess I’d just describe our shows as cute.” says McKenna. “Plus, Peter usually wears a dress, so there’s some eye candy as well.”