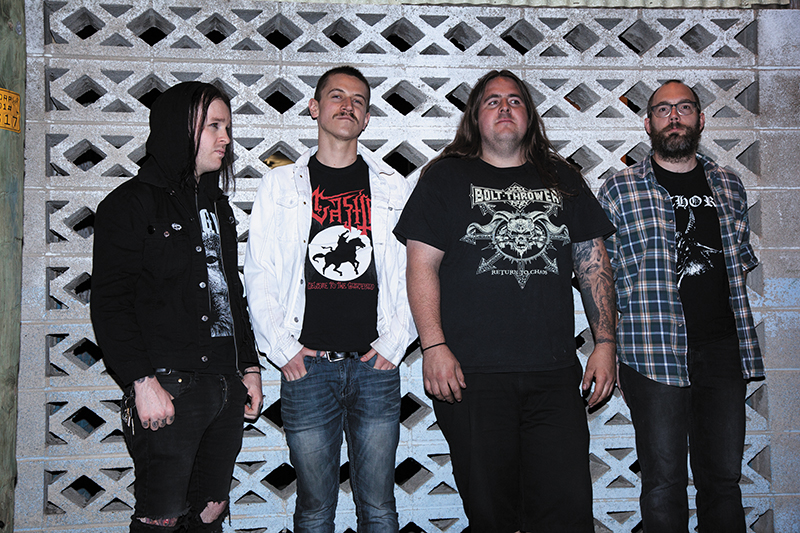 If you’re like me, you’re probably finding ways to celebrate Halloween as early as possible. If you don’t have enough money for decorations, or if you’re too old to go trick-or-treating, or if you’re bored with the selection of horror movies on Netflix, Urban Lounge invites you all (21-plus) to October’s SLUG Localized showcase on Oct. 26. This month features some of the best straightforward hardcore by way of Villain and the grimacing, blackened grinding of Burn Your World, with The Wake of an Arsonist opening. As always, SLUG Localized is free and will be sponsored by Uinta Brewing Co., High West Distillery, KRCL 90.9 FM and Spilt Ink SLC.

Burn Your World are a peculiar entity—the band has thrived for six years with grinding guitar tones over simplistic riffs inspired by those of Napalm Death, but their sound is very much padded by the depths of hardcore with breakdowns and insatiable metallic riffing. They concoct a mixture of disturbingly grim lyrics provoked by primal rage, with almost indecipherable vocals, machine-gun drumming and a single-guitar assault. They are neither hardcore, crust punk, grindcore nor black metal, but you hear it all in their sound.

I traverse through the labyrinth that is Downtown Music, past the many practice spaces of my friends’ bands. I almost stop in and say hello, but I must focus on the task at hand. Behind me, I’m greeted by vocalist Rich Evans, attired in torn, black skinny jeans adorned with patches. With his eyeliner and black undercut hair, he looks like a mix between a crust punk and a gothic hardcore kid. He leads me to the far east side of DTM to their practice space, clad in posters of hardcore bands and horror movies, where I’m greeted by the three other members of BYW. Before I even get a word in, they’ve already jumped into their brand new song “Fatalist”—it’s nice because I feel like I’m being treated to a private hardcore show.

Burn Your World formed in late 2010 after Evans and drummer Evan Dahl’s attempted deathgrind project Splatter the Cadaver proved to be as short-lived as any of the 50-plus songs they had written, the longest of which was just north of two minutes. “Get in, get out and say what you want to say,” says guitarist Kyle Smith. “It’s kind of our method here in Burn Your World.” The hardcore ethos of succinct songwriting traverses well into the band’s music. “We have a bare-minimum approach,” says Smith. “We have one guitarist—two if you count bassist Ross Hagen. It’s not like we’re harmonizing or triple stacking guitars while recording.” When creating music that is, as best stated by Dahl, “fast, heavy and pissed,” there is not a lot of room or need for candescent musicality.

Burn Your World have been compared to the likes of Napalm Death, Ringworm, Crowbar and Immortal, and their sound has been most commonly referred to as “deathcrust.” Evans says he draws a lot of inspiration from crust punk bands like Amebix when he’s writing music. With such diversity among their musical aspects, Burn Your World are not easily pigeonholed into a single genre, having played bills with indie and goth bands to death metal and hardcore bands. “If you don’t pigeonhole yourself to one genre, most people won’t like you because they don’t know where to put you,” says Evans, “but those who give it a chance tend to like it, for the most part.”

A lot of lyrical themes transcend from depression and anger to sci-fi and horror movies, and even as far out as a Simpsons joke that inspired the song “No Funeral.” “It all falls in the realm of hating stuff and of human extinction. I’m not a big fan of people—part of why my lyrics are so misanthropic is I’ve worked retail for so long,” says Evans with a laugh. “One of our new songs is about how extinction is the next evolutionary step for humankind.” Keeping in conjunction with his lyrical prowess, Evans does the occasional stage banter that gets as cynical and disdainful as the songs he writes. “I’m really good at bumming people out,” says Evans. “Give me 20 minutes, and I’ll ruin something you love.”

While Evans holds the lyrical front for the most part, mostly basing his verse off song titles that Dahl pitches, the music-writing is more of a conglomeration between each member, with everyone constructing and deconstructing any given song and riff that’s brought to the table. “Our songwriting is so ingrained with each other that it’s gotten to the point that I’ve forgotten which riff I’ve written,” says Smith. The cohesive songwriting approach has traversed well into their upcoming EP, Full Dark.

Along with Burn Your World, each member has one or two dozen other musical projects they keep up with. “You can get away with a lot of shit if you make it look like it’s all you know how to do,” says Evans, “and this is all I know how to do.” Evans does bass and vocals for the band Communionist and also plays with Dahl and Hagen in the electronically infused doom metal band Curseworship. Hagen has his own ambient black metal group called Schrei aus Stein. Dahl and Smith are in the speed metal band Befouler together, while Smith also plays in the punk band The Politician. “We’re all linked in a strange way,” says Hagen, “but we can’t get enough. We love music so much.”

Burn Your World are increasingly active with multiple shows coming up before and after the Localized showcase, which will double as Full Dark’s release show for the cassette tape. Since it’s a “Halloween show,” the band strongly encourages anyone attending to dress up. SLUG Localized will be held, as always, for free at Urban Lounge on Oct. 26 with co-headliners Villain and openers The Wake of an Arsonist.