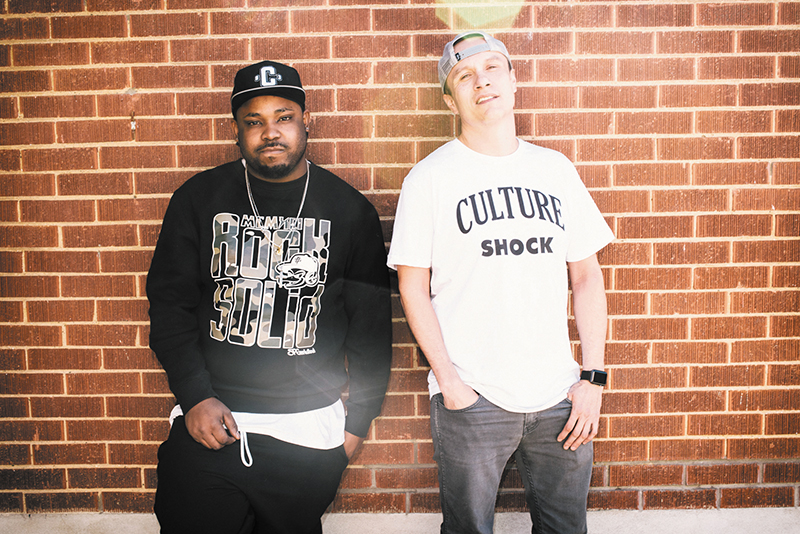 (L–R) Cig Burna and Brisk are serving up Devil’s Food at Urban Lounge for April’s Localized.

The SLUG Localized concert series is back in the hip-hop game with yet another joint at Urban Lounge, and it promises to be lit. The April 21 show will take place at 8 p.m., featuring headliners Swell Merchants and supported by VilleAge veteran Cig Burna and Poet. The show is free of charge, thanks to our sponsors at KRCL 90.9 FM, Split Ink SLC and the Uinta Brewing Company.

West Valley’s own Cig Burna, of the group VilleAge, will bless the Localized stage for the first time on April 21 at Urban Lounge. Although this is Cig’s first time rapping for SLUG’s Localized platform, he is no stranger to spitting rhymes at Urban Lounge, having opened for Mobb Deep and performed at several different shows over the years. Recognition has come slowly, but it seems to be picking up with the Aug. 2015 release of Cig’s second album, Devil’s Food.

If you are a fan of Utah rap music and you haven’t heard of VilleAge, you need to stop pressing the snooze button. VilleAge consists of Cig Burna, Lefty 2 Guns, producer Brisk One (also known as Brisk or BriskOner) and the recently departed Yung Rip. Brisk has produced beats for underground Utah acts to industry giants like KRS-One. His studio, affectionately named Ghost Recon, is a shrine of hip-hop that contains every ingredient needed to create good music: mixing boards, microphones, a booth, hip-hop comics and baseball cards, concert flyers and tons of vinyl. It’s like a hip-hop museum—just the place you’d think would manufacture Cig’s classic hip-hop sound with a Wasatch twist.

Influences from the West Coast, East Coast and the dirty South have seeped into the consciousness of contemporary artists, so categorizing a sound that’s not from places like New York, Los Angeles or Atlanta becomes difficult because the borders of hip-hop have been taken down with the advent of the Internet and increased accessibility to hardware and music programs. Cig Burna and BriskOne are taking on the arduous task of creating a sound for the Valley while still staying true themselves. “We’ve never been competing with locals,” says Cig. “Not saying we are better—I don’t wanna compete with my home team. I wanna compete with those people out there in the world who don’t know about us.”

Lyrically, Cig Burna’s qualities are apparent. “He’s just a natural writer, a natural wordsmith,” Brisk says, “but it’s not so much being a natural writer. There are a lot of people who are natural writers and are able to put words together and rap. I think it’s his life experience that gives the music an authenticity—it’s not contrived.”

You would think that there would be a specific formula or ritual to making music by the second album, but the songs are created organically in sessions between three friends who enjoy making music in each other’s company. (You can’t forget crew member Asian Steve, the manager, promoter and documenter who lent his voice on Track 8 on Devil’s Food.)

So what qualities does it take to be invited to Ghost Recon? According to Brisk, poignant lyrics, meaningful choruses and vivid stories are key tools in a rapper’s toolbox—being able to write material quickly helps as well. Even then, breaking big in the music industry is not an easy task, but Cig Burna is making headway. The title track off of Devil’s Food has been played on U92, something that is uncommon for Utah rap acts. “It feels good to have my music out there in the world,” says Cig, when talking about hearing his songs on platforms like Microsoft music, Sirius XM and broadcast radio, “but at the same time, I paid my dues for it to be there.”

Now that they’ve gotten the Beehive buzzing, Cig’s next move is to make more money to invest in collabs and larger venues and shows. “Our next step is major radio play besides just a few radio spins here and there,” Cig says.

No matter how hardcore or independent a musician is, they are still artists, and artistry inherently requires support. For entertainers to come out of Utah, we have to support local talent—unless you want to wait for a TV show to do it for us again. Come support Utah hip-hop at Urban Lounge.