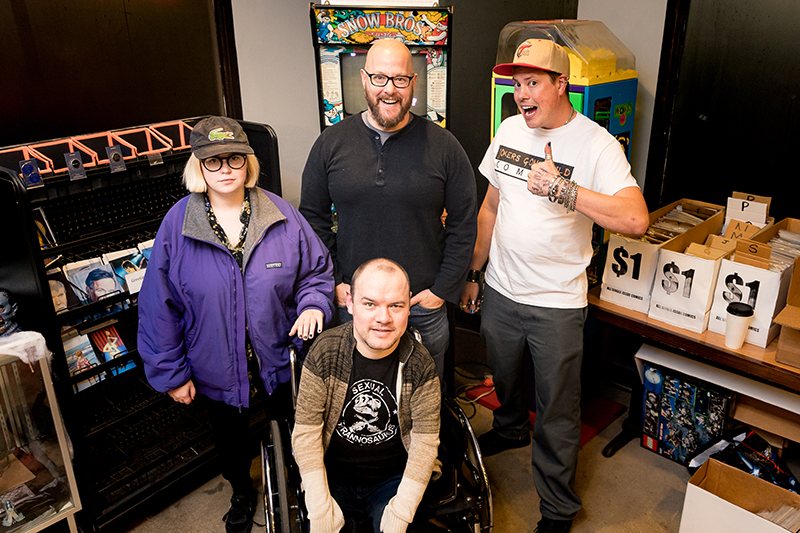 Now that the holidays are behind us, everyone most likely needs a good drink and an even better laugh. A special January SLUG Localized brings stand-up comedy back to the stage at Urban Lounge. Greg Kyte, Marcus Whisler, Trevor Kelley and Amerah Ames cure the holiday hangover with a heaping dose of hilarity. SLUG Localized is brought to you by our fantastic sponsors: Uinta Brewing, High West Distillery, KRCL 90.9 FM and Spilt Ink SLC. Grab some friends, coworkers and the family that you’re still speaking to, and hit Urban Lounge on Thursday, Jan. 18, for a free, funny, 21-plus show.

It’s a new year with new resolutions, and most of those won’t last longer than the next 30 days. Here’s to hoping that you and everyone you know had this one on your list: “Laugh more with all of your friends.” Even if you didn’t have it on there, we can all pretend like we did, because SLUG Localized has just the thing to kick off your 2018 right. Ames, Kelley, Whisler and Kyte clock in nearly three decades on comedy stages between them—which is almost one-and-a-half Amerah Ameses. They each have diverse styles, and all have some side-splitting things to say (or sing).

Freshest among them is the young, witty host of the weekly Comedy Open Mic at the University of Utah, Ames. Her smart and quick humor is the kind that we would typically see from an established comedian twice her age. She’s soft-spoken and quirky, and wouldn’t look out of place in the middle of the cast of Stranger Things. She’s a hardworking comedian and is frequently one of the few women in a room full of dudes at any comedy show or open mic. At every one of her shows, she does more than hold her own. She says she would someday like to impress “anyone over the age of 35. They’ve never laughed at anything I’ve ever said.”

Starting his foray onto the stage in both improv and stand-up, Kelley has performed with a variety of talented comics, even doing an opening set for Anchor Man’s David Koechner. Mainly implementing a storytelling type of comedy, Kelley offers an insight into a world most people are unfamiliar with. As he puts it, “Come out and I’ll teach you how to do sign language—with backwards hands.”

One-third of the infamous Jokers Gone Wild and a proud Ogden native, Whisler is best known for being the “other” guitar-playing comedian in Utah. He does musical comedy because, as he says, “I can’t do stand-up comedy.” While no one may ever know about the quality of his jokes while literally standing up, he’s more than A-OK sitting down with a guitar and singing about some dark albeit hilarious subjects, like morning-after regrets, stalking and beta males.

CPA by day, comedian by night, “angry-accountant comedian” Kyte has been doing stand-up and yelling jokes at crowds for about 15 years. He’s intense, funny and has probably accidentally taught more comedy fans about the finer points of tax law than any college professor. Sure, there are other accountant-comedians, but as he puts it, there is only one angry-accountant comedian.

Ames started out at 19, which gave her a unique view into some of the complications of doing comedy in Utah. “One thing that I noticed when I first started was that Utah has restrictive liquor laws, so you can’t even go in an area where alcohol is being served without food, and that was kind of problematic,” she says. She also points out that in other states, being under 21 and wanting to do comedy at a bar is a little bit easier. “I just wanted to talk at people in bars. That’s it.” She’s of age now, though, but Utah’s liquor laws do put a kink in what’s normal to comedy scenes in other states. Kelley is on the fence and says, “I don’t know if that’s the driving reason, but it definitely doesn’t help.”

A downside to doing shows at bars? The hecklers. Of his bar shows all over the Wasatch Front, Whisler says, “There was never not one without a heckler. You’ve just gotta hurry and have the edge.” Whisler says that during one of his songs—which has an over-the-top take on “loving you so much you’re chained to the radiator”—one of the audience members got offended and started yelling at him. “He goes, ‘When was it cool to sing songs about degrading women?’” Whisler just looked at him in awe, and the first thing that came to his mind was, “Well, ever since the second day in Canada in 1892, right after mayonnaise got invented, and Bill Cosby was actually white. That’s when it first came about.” Whisler says that once the heckler got it out of his system, he did apologize after the show.

Ames adds to that, sarcastically saying, “That guy was a feminist icon, standing up for women everywhere. That’s so brave.” It’s not uncommon, and it’s not the first time a heckler felt like they were adding to the show or putting a comedian in their place. “I would like to thank that man right now for speaking for all of us,” Ames says dryly. At this moment, Whisler wants to point out that in no way does he think that chaining women to radiators is acceptable.

Ames is actually sad that she’s never really had hecklers. “I wish I was good enough to have a comeback ready,” she says. Then she quickly changes her mind.“I think if I got heckled, I would start crying and give them the microphone.” Lamenting, Kelley says, “I wish I got heckled. I never get heckled. This guy kinda heckled me one time. He said, ‘What’s wrong with your hands?’ And I was like, ‘What’s wrong with your fucking face?’”

An even more epic heckler story is the one that Kyte reminisces about from years ago, when he was hosting at a comedy open mic night at Wiseguys in West Valley. “It was the weirdest thing because he wasn’t ‘heckling’ heckling; he just wanted to chat,” Kyte says, laughing. “I would do a joke, and it was something about taxes, and he’d say something like, ‘Yeah, I did my taxes last year.’” When it continued with every other comic, Kyte got back onstage and made an announcement: “You guys are a great audience because ALMOST all of you know that you’re not supposed to fucking talk to the comedians onstage.” Eventually, the “heckler” was told to leave the room, but at the end, the comedians found him drunk and sleeping in the very back. Then there was only one true and appropriate response by any real comic: to take selfies with the drunk, sleeping heckler. Kyte gives advice to every potential audience member out there: “It’s not a dialogue. It’s a monologue.”

Kelley has insight to the heckler problem, given to him by Koechnor. “He told me that it’s been [his] experience that people who heckle shows usually just don’t have the social awareness that we are all listening to one person talk,” Kelley says. For some, it just doesn’t click. Just to be clear: Comedians hate hecklers and would like to invite everyone never to be “that guy.”

With the rise in popularity of dark comedy and more somber topics, there are ways to go about performing more delicate material and social issues. Not one of the four comedians thinks that there are ever jokes that are completely off limits, if it’s done right. Kyte says, “With those delicate topics, it’s really easy to go in there and—what’s the phrase? Fuck the terrier? No, screw the pooch.” He gets rid of old jokes that he realizes were never done mean-spiritedly but might come across as insensitive. “I’m more aware of the situation and want to be part of that change,” he says. It’s not that he won’t do jokes about those subjects anymore, but he re-evaluates how to handle them the way he wants to.

There are some things that are getting harder to joke about because they used to be considered over the top, but now it seems like some people really do think in these “over the top” ways when it comes to race, sex, religion, etc. Ames says, “Like when the audience cheers in the wrong way.” Whisler yells, “NO! Uncheer! Uncheer!”

Sensitive topics have to be done right, and they have to be right a lot faster than jokes that can grow and get better over time. “Context is everything,” says Kelley. He talks about a controversial joke he wants to do, but he realizes that the stakes are really high. “I would have maybe one fuck-up with that joke, and I would need 50.” Without really getting it right through trial and error, he says, “You’d have to golden-gun it. You’d have to get it perfectly right the first time.”

Because of this dynamic, Whisler says he always runs his jokes past his parents. He says, “I figure if they laugh: One, I have the moral vote, and two, I’ve got the senior citizen demographic that I can go to.” With one of his jokes about trying to creepily get a woman’s access alarm code, Whisler says, “Just seeing my dad chuckle, it almost brought a tear to my eye—because my dad is a pastor.”

Ames’ dad doesn’t have a pastor background like Whisler’s, or any moral high ground, as she puts it. She says, “The look of terror on his face when I said that I wanted to have sex with a cactus onstage—it kept me going, I think.”

Kelley’s parents have never seen him do standup. “I would be terrified for them to do that,” he says. His mom asked him if he did any jokes about her, and he told her no. “The very next week, I made a joke about how my mom drank when she was pregnant.” He knows she’d hate that.

The Localized Comedy Showcase is a free show at Urban Lounge on Jan. 18. Doors open at 8 p.m., and the show starts at 9 p.m. The show is 21 and older because, more than anything, things might get weird. In one final plea, Ames says, “I would one day like to make a friend, and if you are that friend, you should come to the show.”