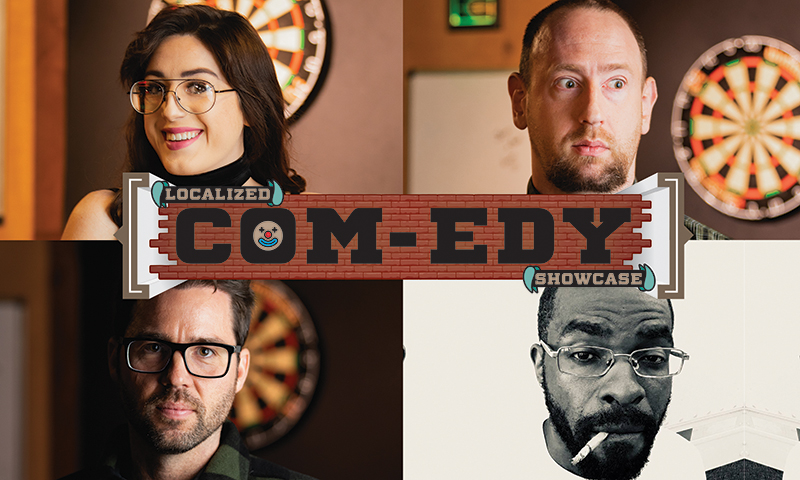 A special SLUG Localized comedy night brings the laughter back to the stage at Urban Lounge. Thursday, Jan. 24, we bring together four hilarious voices, representing some of the best that the Salt Lake comedy scene has to offer. The show is free, the drinks are cold, and there’s no better way to kick off 2019 than finally saying yes to that Tinder match and figuring out what makes them tick by judging how much they laugh at a live stand-up show. Remember, a healthy sense of humor is sexy. That being said, this is a 21+ show, and we won’t hold it against you when you laugh a little too hard at that one, really dark-humored joke (there will be at least one). SLUG Localized is brought to you, as always, by our amazing local sponsors: Uinta Brewing, High West Distillery, KRCL 90.9 FM and Spilt Ink SLC.

This Localized brings together a “host of hosts”: Andy Farnsworth, Hollie Jay, Joe Everard and Torris Fairley. These featured comedians each have made their mark on the Salt Lake City comedy scene by running and hosting local shows and open mics over the course of the last eight years. They have since grown into several of the funniest, hardest-working comedians in the valley. All natural performers, they put forth their own unique brand of comedy, each with their different passions for doing stand-up. Yet, they each showcase what it means to be funny in every facet that stand-up comedy has to offer.

Farnsworth has been doing stand-up since 2004, but, as he says, “only really since 2010,” when he started out in Chicago. He has recently made his way back to Utah after spending several years in the New York City circuit, performing with an impressive “who’s who” of modern stand-up. “In New York, you get to be on shows with everybody,” he says. Farnsworth has performed at bar shows in both New York City and Los Angeles. He’s opened for Doug Stanhope, shared the stage with a name-dropper’s fantasy list and currently hosts his popular comedy podcast, Wandering the Aisles. This January, he’s recording a comedy album right here in Salt Lake City. If that wasn’t enough, he adds to his nerd credibility with the fact that he did a fellowship at the University of Utah for comedy fiction writing.

Farnsworth’s thoughts on being a comedian are answered best in existential ponderings: “I’ve tried to stop—I can’t,” he says. “Really, if I could not do it, I would … Why I do comedy is not funny at all—it’s actually heartbreaking.” It’s possible that he’s just being humble. However, he is known for his hilarious musings that border on neurosis. Farnsworth’s comedy  has been described as “autobiographical and conversational.” “I had someone tell me that it’s a fun meltdown,” he says. “Now I’m going to have to reproduce a meltdown every time, which is painful.”

Torris Fairley also started out in 2004, but again, “only really” since 2010, which appears to be a magical year. He bounces between gigs in Utah and Nevada and began his stand-up career in Chicago. He describes his comedy stylings as “universal,” which could explain how he can appeal to such vastly different audiences. Fairley developed a love for stand-up as a child watching the comedy legend, Richard Pryor, in concert. “He had me laughing to the point I couldn’t breathe, and he had me in tears,” he says. Now, Fairley can’t see life without comedy. “Quite honestly, I was just born to make people laugh. I have more opportunity to make people laugh with stand-up comedy, whether it’s an open mic or while at work, or home, or out grocery-shopping,” he says. Fairley has hosted a long-running, weekly open mic at Big Willie’s, along with other featured shows and comedy competitions.

Joe Everard has been hitting Utah stages for the last four years and has become a staple host in the open-mic scene, as well as and running feature shows. He’s a valuable player in the comedy game, as it takes nerves of steel to put on a weekly late-night open mic at a bar at the Ice Haüs, complete with a revolving door of drunken hecklers. Everard started young with the spark of confidence only a comic can really understand. Everard says “I was raised Catholic, and now, whenever I go into a church, I see Christ up there and say ‘I could do that,’” he says. He discovered his passion for comedy by feasting on some heavy-hitter stand-up specials, like Dennis Miller’s Citizen Arcane. With his witty, satirical one-liners, his comedy style is perfectly funny without being complicated. As far as figuring out the pulse of Utah comedy, he’s taken notes and formulated his strategy. He says, “The pulse is slightly off-tempo. I think you just have to find the right rhythm and just get in that groove, just like anything else.”

A newcomer to the stand-up scene, Hollie Jay hit the ground running a year ago and hasn’t quit. She’s hosting open-mic nights, performing on featured shows and opening for big acts right out of the gate. What she lacks in stage tenure she makes up for in dark, sarcastic humor. She’s found that comedy was a just a natural fit for her. “I’m super awkward offstage, so being onstage gives me a chance to practice not being super awkward,” says Jay. “I feel like literally no other form of therapy has ever worked for me—nothing. Therapy, drugs, family, friends, nothing else feels like it has worked for me the way that it should. Comedy feels like that one thing that’s life-changing and the thing that you use to get through life. That’s my one thing.”

Each of these comedians have different experiences within the different comedy scenes, but each share their thoughts about the uniqueness of our local scene. “The scene’s really great. There are a lot more comics here, and people are moving in from other cities,” says Farnsworth. “People are learning to kind of make it outside of New York, Los Angeles and Chicago. It’s growing I think.” Jay agrees and says, “People are shocked to know that Utah has a stand-up scene. And we actually have a very strong stand-up scene here. I think the myth from the outside perspective is that it wouldn’t be very big or very strong or important, but it totally is.”

The movement and growth within the comedy scene in Salt Lake City excites the comedians. “It’s definitely growing,” Fairley says “Salt Lake City has a great opportunity to stand out just by putting egos aside and just hoping they’ll make people laugh. If they do that, there’s a lot of talent—some hardcore talent.”

To each of these entertainers, comedy provides value and is much-needed as something that brings us together. Everard says, “I think one of the most fascinating things is listening to a crowd. You can sense the human gestalt emerging and where you can have a group of several hundred different people that come from different walks of life, and for that very brief moment, they breathe in rhythm, and sometimes they don’t even realize when they are responding to something and why they are responding to it.”

There is contemplation about what comedy offers audiences other than just a laugh. Fairley says, “We help people. The sound of the audience is the best thing, because all that is is the sound of you healing people. Laughter is the best medicine. So I feel like when people are laughing, that’s the equivalent to saying, ‘Thank you, you’re healing me, I’m better now.’”

While comedy is changing in the era of YouTube and Netflix, there are still one-of-a-kind perks to live comedy. Farnsworth explains the differences with the “old school” stand-up and the “new-school,” highly-accessible comedy. “The comedy I fell in love with is in a room with that low ceiling and that spooky, haunting thing. You can’t reproduce that on a Netflix special,” Farnsworth says.

Everard and Jay both see these new platforms making comedy logistically easier for comedians, but the downside is that there are now almost too many voices to choose from. Fairley doesn’t like the rapid changes to comedy as entertainment. “The quality isn’t there—Netflix really doesn’t understand stand-up,” Fairley says. “It’s watered-down now. I’m not saying the people aren’t funny, but I’ve heard funnier shit locally.”

With live, local comedy, there are no edits and anything can happen. Farnsworth talks about the new type of emerging comedy fan. “There [are] so many people that like DIY comedy, comedy that’s not major-label comedy. This show is a great example of that,” Farnsworth says. He still can’t believe how many people want to come see his live shows. “People just want the experience of being out. They like that.” In fact, Everard points out that there are now multiple venues to see live comedy in the state, as fans begin to gravitate toward more of a genuine experience.

Moreover, Fairley passionately advocates for getting out to see live comedy: “Not only are people going to get good-quality stand-up, but we’re going to represent stand-up the right way.”

In 2019, there will be many opportunities to follow these highly talented comedians. Farnsworth launches the new season of Wandering the Aisles in February, which you can find on iTunes and Stitcher. Farnsworth’s comedy album will be recorded at Urban Lounge Jan. 12 at 6 p.m. doors at 7 p.m. and available for purchan on iTunes in March. Fairley can be seen on multiple shows within the Las Vegas and Salt Lake comedy circuit, and Everard will continue to host and run shows within Salt Lake City. Jay will be hosting an all-female comedy showcase at the Ice Haüs. At this point, live stand-up comedy in Utah is unstoppable and has these wildly funny comedians within the best of the best.