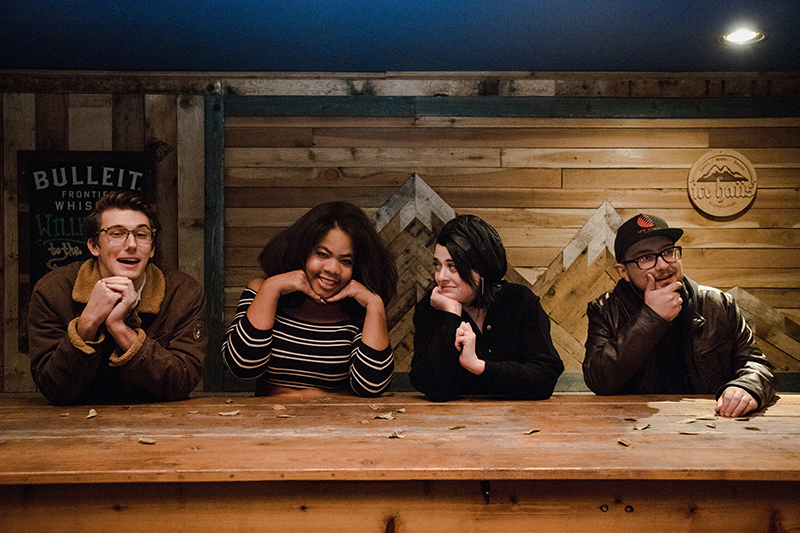 We have locked up the guitars, tied up the singers and hidden the drums to allow comedy to take over at Urban Lounge for the comedy showcase of SLUG Localized. Hitting the stage on Jan. 23 for a night of stand-up are local co-headliners Jasmine Lewis and Greg Orme, with Rachel Rothenberg and Sam D’Antuono as the co-openers. Each comic has their own unique style of comedy—there is something for everyone. Whether you like clever puns, killer dry humor, flamboyant storytelling or the downright absurd, there’s a guarantee of a good time. Bring the last of your family who haven’t left yet from the holidays, or that one coworker who keeps telling you that you should “hang out sometime,” because the show is $5 and the bar is stocked. SLUG Localized is brought to you by our amazing local sponsors Uinta Brewing and Huge Brands.

These comedians are dedicated to stand-up. Ranging from two years of experience (Lewis) to Orme’s decade in comedy, the time pounding stages and open mics keeps them going. D’Antuono says, “I’ve never done anything this long. I’ve never done anything for four years. I think I’m just kind of in it because I’ve done it so long at this point.”

D’Antuono forgoes gritty and real topics for the more surreal. He jokes that he got into comedy because his real dream of becoming a cruise-ship captain was already taken. D’Antuono likens his start in comedy to performing in the Colosseum—I hope this is an analogy: “I started back in the day where people, instead of laughing, would throw spears at you.” It’s possible that a short four years ago, a thumbs down from the “mighty emperor” would result in death. “So it’s significantly improved since I started,” he says. Then again, these are open mic crowds in Utah, so the analogy seems to check out. D’Antuono will also be performing as a part of the Soliloquy Showcase at Wiseguys Comedy Club in SLC on Jan. 16.

By contrast, Rothenberg, who has been on the stage for a similar three-and-a-half years, seems to have missed out on all the ceremonial spear-chucking. She realizes that comedy is a good personality fit for her. “I like monologuing to myself,” she says. “It’s kind of like talking to yourself in a room full of people. Because you’re not having to look anyone in the eyes, you’re kind of just talking at nobody, which is how I function best. I’ve tried doing improv and things where you have to work with people, and I just don’t have the temperament to do that.” Rothenberg finds that she has a talent for making people laugh when she worked as a political canvasser during the 2016 election cycle.

“[Stand-up is] kind of like talking to yourself in a room full of people.”

Rothenberg has had to work hard to polish her style and come into her own as a comedian. “I was uncontrollably awkward,” she says. This is a sentiment that she expressed to SLUG in the online exclusive Rachel Rothernberg: Fierce, Funny, Fashionista, published in October of last year. However, Rothenberg is always looking for room to grow.  She records her sets and studies her comedy to continue discovering her style. Her hard work has paid off. “I have really become an adult woman in the time I’ve done stand-up,” she says. “I’ve gotten a little more composed.”

Orme has a more simple reason for joining the stand-up world: “I demand attention,” he says. “I was playing in a band before this. Thank god there’s no evidence of that.” The band didn’t last, quite possibly due to his guitarist’s insistent need to cover Phish songs. “Not good,” says Orme, “but eventually, it got to the point where it was more fun talking in between the songs than listening to us play music. I was like, ‘What if I could just do that part and not have to worry about these other people?’”

After doing stand-up comedy for nine years, Orme—with his dry, straight-man delivery—eventually followed his dream away from Utah to New York. “I bombed for two solid years in New York, and at a certain point, I was like, ‘What the hell am I doing this for? It’s expensive and I hate everybody,’” he says. Yet, he kept going, deciding not to care if other people liked it or not. “I’m going to entertain myself, and I got a little better.” After five years in New York, he decided to come back to Utah and pursue comedy as a career.

“If you’ve exhausted every other option, if you can’t be a cruise-ship captain, and if you’ve made it so far in the Colosseum that you’ve never died, then you try stand-up.”

Lewis is the newest comedian in the lot. She started out in improv rather than in stand-up.  A former college cheerleader, her energy and confidence still come out in her comedy. Lewis also performs with the improv group Crowdsourced Comedy. Hitting the stage as a solo act seemed like an easier transition for her than for most. “I’ve always liked to be onstage and entertain,” she says. “Growing up, I did stuff like dance, and then I was a cheerleader. In college, I majored in broadcast journalism. I wanted to be a news anchor, but I always enjoyed the funny, comedic stuff.”

Lewis says, “When I started comedy, I started doing improv, so that was way different. You’re in a group. You can fail while others succeed, and other people help you to succeed. So when I started doing stand-up, I felt like I already had a lot of natural components to be funny. It wasn’t as nerve-wracking.” Once she was used to being on the stage and talking to a crowd, she realized that she was not afraid to be in front of people, and it came naturally. “When I started, I was like, ‘I’m not bombing—am I doing something wrong?’” she says. “I had already experienced failing in a group, which is way easier than failing by yourself.”

But can just anybody do stand-up comedy? The sentiment was an overwhelming yes, but with some interesting outlooks. D’Antuono says, “No one should do it … but people can.” Joking that he is quitting the all-or-nothing world, he says, “If you’ve exhausted every other option, if you can’t be a cruise-ship captain, and if you’ve made it so far in the Colosseum that you’ve never died, then you try stand-up.”

Lewis is a bit more practical when it comes to encouraging others to get involved in comedy. “I think that, technically, anybody can do it,” she says. She believes that the subjective nature of comedy makes this true, but also presents its own challenges—comedy changes between shows, venues, crowds and locations. Sometimes a joke lands in one place and bombs in the next. “I think that’s the hardest part of comedy, how unpredictable it is,” Lewis says.

Live comedy has a different kind of magic altogether when compared to watching a special or scripted sketch show. Lewis posits that the reason to see live stand-up is to experience the energy from the crowd. With her improv background teaching her to feed off the crowd’s suggestions, the feeling of a live show is different than what you can see in a recorded work, which can leave out the natural riffing and the unpredictability of the audience. “Everybody around you is laughing, the comics onstage are having a good time; you’re really in the moment enjoying,” Lewis says. “It’s like seeing a play. You don’t go watch plays on YouTube. You want to be in the seat. You want to be there.”

She agrees that there is a difference in seeing live comedy due to the crowd consciousness that forms. “You kind of get to mess with a group of people who are experiencing the emotions and waves together,” she says.

“I don’t think people should go see live comedy for any other reason than I can develop a craft that will be useless forever.”

D’Antuono and Orme share a more cynical view on live comedy, albeit in a joking way. “I don’t think people should go see live comedy for any other reason than I can develop a craft that will be useless forever,” says D’Antuono. He sarcastically explains that the reason comedians continue doing comedy is for the love of the stage, not the money. There is—relatively—no money in comedy. “My bank account is bursting with many coins,” he says waggishly.

Orme sees his comedy as a way to have human interaction, or more than interaction, really. He points out the sometimes too-personal nature of comedy. “I think stand-up is a great way to hear the ‘F’ word.” He jokes that it’s the only human connection he has-—“I’m lonely,” he says.

As far as this special Localized Comedy Showcase goes, Rothenberg encourages getting out of the dark, cold, awful January. “I think you should kick off the cold with some comedy,” she says.

The SLUG Localized Comedy Showcase is Thursday, Jan. 23. This $5 show is 21+ at the Urban Lounge in Salt Lake City. Doors open at 8 p.m.; show starts at 9 p.m. If you need any more convincing to see a local comedy show filled with amazing Utah stand-up comedians, Orme makes a great point: “They have a bar. So…”