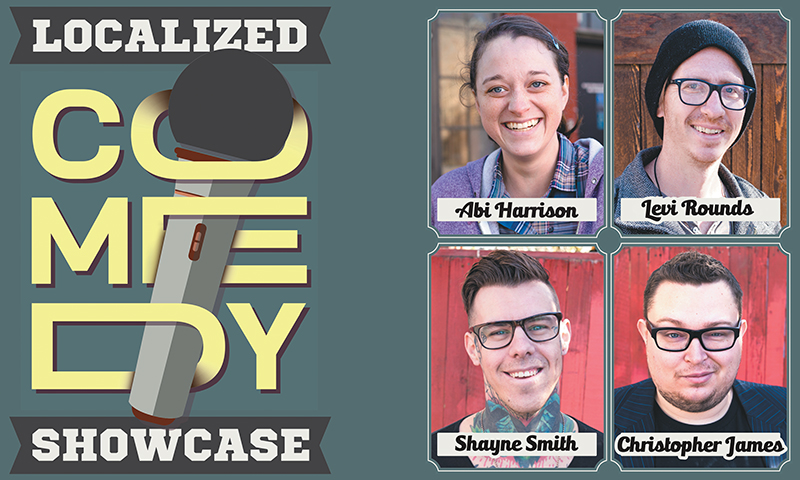 SLUG is bringing back comedy to the Urban Lounge with an all-local-comic showcase on Jan. 19 with headliners Abi Harrison and Levi Rounds, and featuring Shayne Smith and Christopher James. These four amazingly funny and incredibly talented stand-up comedians will share the stage for one night only, filling the concert venue with a new kind of music: the sound of unbridled laughter. This show is 21-plus; doors at 8 p.m., show at 9 p.m. As always, Localized is free, thanks to sponsors High West Distillery, KRCL 90.9FM, Spilt Ink SLC and Uinta Brewing.

These jokesters have a combined 32 years of stage time between the four of them, with performances throughout Utah and all over the U.S. The Utah stand-up comedy scene is rich with talent, and these four prove that at the heart of it all are hardworking and fearless people who have stuck it out through horrible gigs, rampant hecklers and thrown beer bottles to pursue a life on the stage.

Being a stand-up comedian is about taking the punches with the laughter, and it hasn’t always been an easy ride for any of them. In fact, even hardcore veteran comedians have little-known quirks. Rounds, who started his career over 11 years ago right here in Salt Lake, muses about his number-one fear when he’s on the stage. “I have to pee every single time before I go onstage,” he says. “Even if I didn’t have to pee three minutes before, I really have to pee then, and it’s at a very inopportune time, like, ‘You’re on in 30 seconds.’ ‘Alright. I’ll be right back.’”

Smith laughs in agreement. He says, “Anytime I do over 30, I’m not thinking about my set list. I’m thinking about how close can I pee before I go onstage. Because I’m gonna have to go when I get up there.” Smith, the new kid on the block with two years of comedy under his belt, says confidently, “I don’t have a lot of fears. Maybe I’m too stupid to be worried. Sometimes I worry about someone coming up on to the stage and attacking me.”

Rounds laughs at the idea and consoles him that it’s more of a reality than a fear in his case. “I’ve been punched onstage,” Rounds says. “I’ve had a knife pulled on me after a show, and I had to be escorted out of a city, and none of those ever scare me when I get up onstage. But I do have to pee right before I go onstage—every single time.” It’s not surprising to hear—Rounds is known for pushing the audiences’ comfort level with raw topics.

Another decade-long veteran of the comedy scene is James (@FatGuyPunchLine), but he confesses that he has a pretty natural concern to be nervous about when he’s onstage: “… If I was up there and I was confident in my set, and then everybody just periodically got up and left to the point that where everybody was just dissipated, and they were gone.” However, James tends to hold a crowd pretty well after all the years of practice. He landed a killer opening act for David Koechner last spring, who also kindly recorded the theme song to James’ local podcast, In Movie Nerds We Trust (@trustyournerds).

Rounds acknowledges James’ fear of the crowd abandoning you at the peak of your performance. “Oh, shit,” he says, “you get used to that.” Smith interjects in agreement: “Yeah, you go to Wyoming enough times …”

Yet, when it comes to Abi Harrison, who also has an 11-year run onstage, her fear is more focused on a specific situation and not the audience as a whole. “If there’s somebody I want to impress in the audience, sometimes I’ll be afraid,” she says. “It depends on whether I like them or not.”

James concurs: “I stopped bringing dates,” he says. “One time, a girl said it was ‘too much of a culture shock’ for her. That was a direct quote. She said, ‘I don’t think I can come to comedy shows with you anymore because it’s too much of a culture shock.’” Harrison nods in agreement. “There is a culture there, too, though. We’re the lowlifes, the underlings.” Comedians aren’t really known for their ability to keep it P.C. “We say a lot of horrific stuff,” says Smith. “Sometimes I forget how horrific it is, and then you get around normal people, and you start saying random things, and they’re like, ‘What?’ And, then you remember, ‘Oh yeah, I can’t talk about everything.’”

Rounds gets into the detail of the “shock” someone new to real, raw comedy would feel. “We get so used to each other talking about how we were molested and shit like that,” he says. As rough as that sounds, his fans have complimented him on that exact set being hilarious—“but you say that shit in a Chili’s bar or something, and they’re going to ask you to leave. So yeah, culture shock.” It should be pointed out that Rounds can sometimes go into some dark yet funny places with his comedy, which makes him a usual crowd favorite in the bar scene.

Smith one-ups Rounds on that thought: “Or, you’re talking about your stepdad beating you, [and] it’s ‘not appropriate in mixed company,’” he says. “But somehow, it’s appropriate onstage in front of strangers?” Smith and Rounds both laugh, and it’s apparent that they’ve all had this conversation before.

Each of them have been doing comedy for so long now that their lives have leaked into their sets and vice versa. As Harrison puts it, “It’s all one thing now. It’s just one thing.” It does help that she has an amazingly interesting life that she routinely talks about onstage, including material about her child and being married in the Mormon Church, but also being gay.

“I feel like my life leaks too much into my comedy,” says James. “The universe wants me to fuck up, so I have something good to talk about onstage.” As a comedian who is most known for his self-deprecation (and a Twitter hashtag, #Cjjokes, which took on a life of its own), he knows that there is always an upside to having a rough patch: In his case, it makes for good comedy.

“I feel like my career—heavy quotation marks around “career”—started officially, and it felt like, ‘Oh, this is a real thing, and I’m really doing it,’” says Smith. “Comedy was my life, and life was my comedy.” A frequent regular on the comedy club scene in and around Utah, it does seem that Smith’s life has become all about comedy—and really entertaining comedy at that—in his budding career.

“I said I switched religions to comedy,” says Harrison. “Like, comedy is my new god. I was thinking about the same thing, showing up to church like, ‘Is this open-mic tonight?’ There are three people here, and it’s fast and testimony meeting, and there are ‘investigators’ there.” She started her career at BYU and has a dedicated fanbase in Utah that can relate to her quick, clever jokes about Utah culture and deadpan delivery, because that is genuinely Harrison.

Sometimes, however, the comedy can leak a little too much into life. Smith shares an awkward moment where his comedy may have been inappropriately timed: “My aunt was dying of cancer, and we said goodbye to her. It was the very last time I’d ever see her,” he says. “We were walking out into the hallway, me and my family, and we were holding each other and crying. The man in the room next to us was going through his death throes, and he had a death croak and made that crazy sound. As we were holding each other crying, I said, ‘I’ll have what he’s having.’ Then I was like, yep, inappropriate.”

Since 2017 is a new start, a new year and all about new beginnings, each of the four actually wants to do some good with their comedy. Smith thinks his comedy is already trying to change the world—at least on a local, personal level. “I use it to make people happy that aren’t happy,” he says, “and that is the reason that I do it already.”

Rounds laughs and pokes fun at the positivity. “That should go in a Christmas song,” he says.

Comedy is a rare art form that has had a lot of impact on culture in general. James brings up a more down-to-earth observation. “I was listening to this random podcast, and someone said something that I thought was pretty awesome,” he says. “That comedians—we’re the kind of people that are actually brave enough to say things that normal people wouldn’t. Maybe that’s, in a sense, our way of changing the world. I don’t think that my comedy in particular is going to do anything groundbreaking [though], where it’s like, ‘Oh hey, you cured cancer with your dick joke. Congratulations!’”

Rounds has a slightly different take, though. “Seventy percent of the reason you do [comedy] is to make people laugh … I’m not going to begrudge anyone if they say 100 percent of the reason they do it is to make people laugh. That’s not for me to say for other people,” he says. “For me, it’s 70 percent—and then 30 percent is to make them think about something and to make them realize that they’ve been through some garbage, and you’re up there being very vulnerable about the garbage that you’ve been through and the garbage that you’ve seen, and you’re comfortable talking about it. So, maybe they can talk about it, too. And maybe there can be a little bit of change while they’re laughing about it. That I really like. That’s my favorite thing about comedy.”

Harrison pauses and thinks about it for a moment—“The same?” she says with a laugh. “I’m going to fight racism, I’ve decided.”

Smith agrees that stand-up has an important place at the table, especially for those who can relate to the darker, rawer style of comedy. “You’re arming people with the tools to deal with horrific shit that they might not otherwise have,” he says. “Being able to look at something in a funny way is a skill, or else everyone would be doing this. Then, they see it from your mind, and they can move on from there.”

In the end, James sums it all up perfectly: “People go to support groups to cope with horrible things,” he says. “They go to comedy clubs to finally be able to laugh at them.”