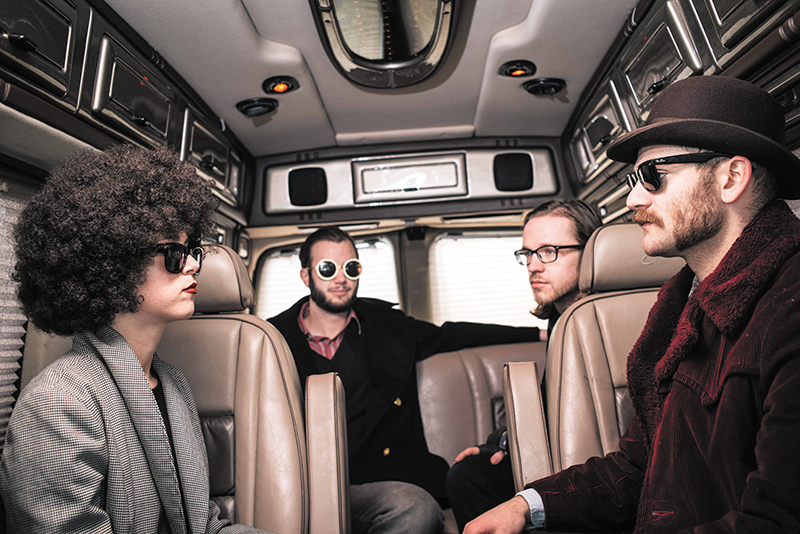 This month’s Localized features an array of reinvented classic American music groups. Michelle Moonshine kicks off the show with her imaginative and stirring Americana folksiness. Following are the Southern rock–infused, and swooning country darlings June Brothers. Rounding out the show will be modernized, blues-entrenched, recalcitrant and untamed resident favorites Crook & The Bluff. The event is on March 17 at 8 p.m., with sponsors Spilt Ink, Uinta Brewing Co. and KRCL 90.9 FM.

After a recent reordering of their lineup, Crook have surged the local scene with their thunderous, psychedelic-blues styling. Kirk Dath is the mainstay as vocalist, joined by Sarah Degraw, who learned how to play drums for the group. Ryan Arnold has joined as a second guitarist, and Kevin Schultz slays the bass. Their updated approach provides their followers with a new, exciting twist on their rough and sexy sound.

With a new lineup, their sound has altered significantly. Extra instrumentation from two new members provides a more robust sound. “The music has gotten a lot louder because we have a rhythm section they never had before,” Arnold says. This rhythmic approach has supplied a cadence that you can move to. “The new songs are drum- and bass-focused,” Dath says. “The groove was there before, but now you can tap your feet to it.” Their repertoire now includes a spaghetti Western–style jam and more dynamic, fuzzed rock n’ roll that often gets mistaken due to the sound of their album, Down to the Styx. “We got nominated for City Weekly’s Best Roots and Americana band, and our live show is a lot more rock n’ roll,” Degraw says. The group is so dynamic that they are often hard to pin down. “The album does not represent what we sound like at all,” Dath says. “This band changes every five minutes.”

The union of the current lineup came from swift circumstances. Dath, Degraw and Tad Wilford, a previous member, had planned a tour beginning in Southern Utah, and the route of their story changed in Cedar City. “Tad quit before we were supposed to play our first show,” Dath says. “He had his own reasons, and they were justified—he just couldn’t be part of the band anymore.” The next day, Dath called Schultz and Arnold. When Dath and Degraw returned from tour, the foursome joined together and began practicing.

Even though Wilford departed mid-tour, Degraw and Dath performed in L.A. with style. “We had to continue the tour because we made plans and we didn’t want to look unreliable,” Degraw says. The trip, save for a few hiccups, was a complete success. “We slept in the car and got our truck broken into, but we were able to call Seth Cook from Giraffula and borrow his practice space,” Dath said. “We reworked the whole set and learned how to loop on the fly.”

Before each show, Crook have a specific set of pre-show rituals that they adhere to. “We get really drunk,” Degraw says. The group doesn’t stop there, and finds that mixing poisons is the best route for a smooth performance. Some members have different approaches to pre-show preparation. “We all get dressed up and get off on how well-dressed we are, like, ‘Damn, we all look fucking good,’” Schultz says. Dath had the ritual I can most relate to. “I always have a good pre-show poo,” he says. “Your nerves pile up, and you just have to expel it.”

Crook recently competed in a battle of the bands at Velour Live Music Gallery in Provo and had a curious experience. Often, music that comes out of Utah County has a distinctive sound. “We brought the heat, but I feel like no matter how hard we work, what we do is contrary to what that scene wants,” Schultz says.  This specificity has provided a benefit for the bands that live and perform there. “Provo has a really supportive and integrated music scene,” Degraw says. “You want to see the support from bands for other bands. I think that is a lot of where Provo’s success is from.”

The new foursome recently embarked on another tour, this time beginning with the Escalante Music Festival in September with Salt Lake’s Big Wild Wings. Afterward, they traveled to the California coast with a few stops along the way. “We went to Pasadena and we played at the Velveteen Rabbit in Las Vegas [and] then we went played in St. George,” Arnold said. As is common for touring bands, they had a few adventures along the way. “We drove straight to Hollywood and ended up passing out in the van and having to break into Eric Fisher’s apartment,” says Dath.  Tours never seem to go quite as planned, but amusing adventures rise out of small adversities.

You may think that you know what to expect from Crook & The Bluff, but their new “power sets” will flip your perspective. You can find their music on crookandthebluff.bandcamp.com, as well as updates about performances on their Facebook page. Come see them live at Localized, prepared for enveloping fog, well-orchestrated lights and phonically induced delirium tremens.