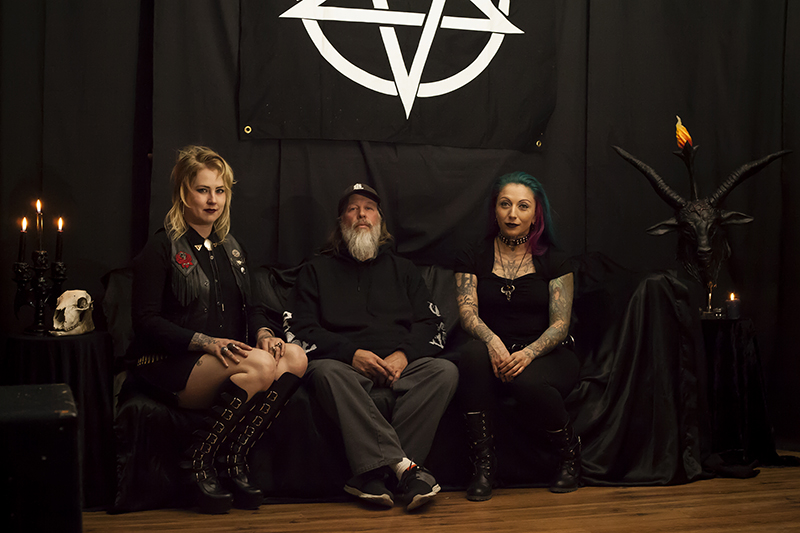 The Winter Solstice: the time of year when night outweighs day, darkness looms at its peak and the crème de la crème of the grim underbelly of Salt Lake’s metal scene take to the Urban Lounge stage for SLUG Localized. This month features the sheer brutality and aggression of blackened thrash outfit EXES and the impending doom and grim theatrics of the atmospheric Darklord, with Korihor throwing their hat into the ring for an evening filled with headbanging, moshing, drinking and sacrificial rituals. As usual, SLUG Localized is a free, 21-plus show and is sponsored by Uinta Brewing, High West Distillery, KRCL 90.9FM and Spilt Ink SLC.

Some very specific imagery comes to mind when one hears the name Darklord. “The archetype of the ‘dark lord’ is something that’s in a lot of literature,” says drummer Steve LeFavre. “You don’t have to tell someone what Darklord means because they get it right away.” SLC’s Darklord adhere to their namesake with both sound and imagery, bringing a grim wave of ambience with crawling guitar riffs that match their live, hammer-horror theatrics.

After the demise of Year of the Wolf, LeFavre and Gunner Bandura (guitars/vocals) kept playing together when a new sound began to take form. “Steve and I were in Year of the Wolf together, and then that started to fall apart,” says Bandura. “I just said, ‘Let’s just start this other project—we’ve been talking about it forever.’” Taking a break from the Cliterinas, Brewja (bass/vocals) reached out to Bandura wanting to play bass for Year of the Wolf, but found that a new entity was taking form. “I was under the presumption that it was Year of the Wolf,” says Brewja. “They never mentioned Darklord until later. I really believed in Year of the Wolf and wanted them to continue. When I got here, it was just these two, and they started telling me that they have this other plan. I was kind of wary because I didn’t know what kind of music they were going to bust out. Then they played some songs, and I was sold.”

One thing is abundantly clear when discussing Darklord’s music: All roads lead back to Sabbath! “We’re obsessed,” says Bandura. “Black Sabbath is one of my favorite bands in the world. They kill at everything. We play in drop D because of Tony Iommi.” The likes of Motörhead, Judas Priest and Danzig often come up when mentioning inspirations. “All good art is borrowed, and great art is stolen,” says LeFavre. “What we want to achieve is to take the feeling that a certain song brings to you and being able to recreate that in our own music.” Strategically placed in Darklord’s layered sound is Bandura’s gravel-pit for a voice box; guitar licks ranging from the dissonant, doomy riffs of Sabbath to the speed and ferocity of early thrash; and the abrasiveness and urgency of punk. “I’m a fan of their music and I love being a member of this band,” says Brewja. “This music deserves all of your attention, practice, skill and time, and I always think, ‘What could I do on bass to make this sound right for this band?’”

The cohesiveness of their songwriting is also in part due to spawning lyrics out of ideas that LeFavre says “takes back to my 14-year-old self of listening to Rush, playing D&D and smoking pot in my parents’ basement.” Elements of sci-fi and fantasy come out in songs like “Planet Weed” and “Inundation of the Moon.” “Raised by Wolves” is a song dedicated to the memory of Chris Drelinger (Year of the Wolf, Never Say Never, Drunk as Shit), and “Temple of the Blind” is a straight-up middle finger to organized religion.

Darklord’s collective aggression toward religion not only fuels their music but also the use of the Pentagram and Baphomet in their imagery. While they aren’t Satanists, it’s used as a means for shock value and representing freedom and rebellion. “All of us believe that you have yourself, and that’s it,” says LeFavre. “Satan represents the individual self and freedom of will.” There is no better place to turn heads with the use of Satanic imagery than Salt Lake City, and it’s emulated to the extreme in their live performances. With LeFavre’s experience in Rocky Point, his love of theatrics prompted the inclusion of a fake Baphomet with a black strap-on dildo and the unnamed High Priestess as their mascot in their performances, complete with a virgin sacrifice. “The High Priestess is an immortal from the Ninth Dimension, the Baphomet joins us from the ninth level of Hell, and we pull virgins from the Singles’ Wards,” says Brewja. While definitely more simplistic and subtle than that of any GWAR or Alice Cooper show, the theatrics are another extension of Darklord’s rebellious nature and ultimately make them stand out among other metal acts, but never distract from what’s truly important. “Less is more. Your imagination is a lot worse than what you’re going to see,” says LeFavre, “but we don’t want to just be known for [our theatrics], so we play a lot of shows without it.” As best put by Bandura, “It’s all about the music at the end of the day.”

Brewja confirms that their full setup will be used for the Dec. 21 Localized showcase, and the way they’ve built it up, it sounds like a must-see display. So, dear readers, come witness the macabre and ominous spectacle that is Darklord.