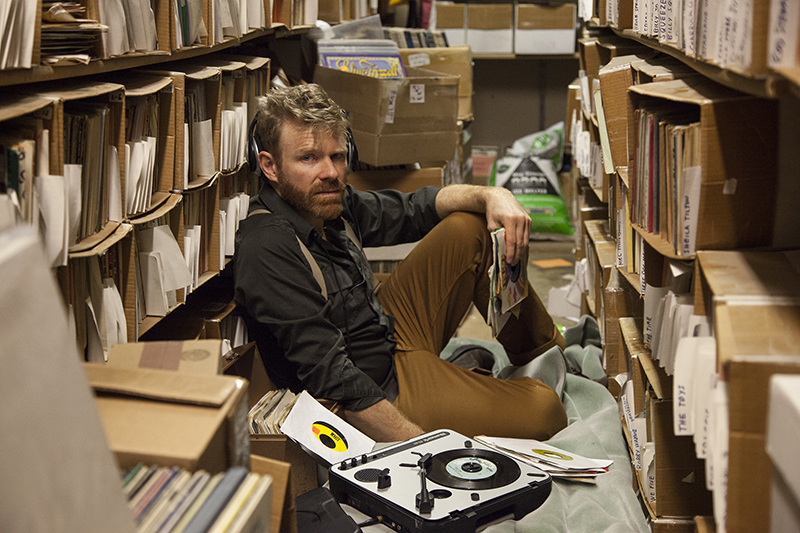 Sam Stinson, aka DJ Feral Cat—a no-nonsense audiophile with a flair for soul, funk, R&B, blues and underground disco—carries his 45” records in a cast-iron case and his wealth of musical knowledge with humble pride. His very presence seems to ask, “How much does music mean to you?” When in conversation, one can easily see how much it means to Stinson.

For Stinson, music became inherently linked to heritage and, at the same time, rebellion. “I started buying rap CDs at the age of 13,” he says. “That was a big deal then. I was in defiance of the music accepted by my parents. Ice-T’s Power was my first ‘explicit lyrics’ CD. I scored it used at another shop because I couldn’t buy explicit rap at my dad’s store.” His father’s shop—local vinyl staple Randy’s Records—definitely affected Stinson in those early years. “Growing up in a record store gave me access to music that most people of that time didn’t see, hear, know of,” says Stinson. “Being able to listen to that music definitely opened up music avenues that I wouldn’t have otherwise been exposed to.”

Perhaps more influential than the shop as a musical avenue were the audiophile tendencies of his father, Randy Stinson, who took it upon himself to impart a love for music to his children. “I remember when me and my siblings were kids, our dad called us into the other room and did a side-by-side listen of a CD versus a record,” says Stinson, “and he asked which one sounded better, and everyone said the record.” Randy’s refinement of taste and ear opened a constructive channel for Stinson. “[He] really influenced me to collect records—it put me on the path that I am on,” he says. It is this path of collecting that eventually led Stinson to DJing, but not in the most direct course.

Stinson’s first memories of seeing a DJ in action were witnessing his brother perform at a church dance. “I saw that, and it was my first notion of DJing being really cool,” says Stinson, “but I never really thought about doing it myself until years later, when I was 16—my first gig was at a church dance.” Then, during the 2002 Olympics, Stinson filled in for his friend DJ Justin Godina at a last-minute gig, armed with nothing more than “a pre-mixed funk CD by a really good funk DJ, and [I] just let it ride,” says Stinson, “because back then, I didn’t really know what I was doing.” Years later, Stinson became a bartender at the now-defunct W Lounge and was able to “see and hear and get a taste for what [DJs] do.” This inspirational spark, along with Stinson’s astonishing record collection, pushed him to pursue something more legitimate as a DJ: “One day, my friend Brinton Jones suggested doing a soul night,” he says. “My friend Rebecca McIntosh hopped on board, and we started a night called Downtown Soulville then Soulville at the W Lounge. “But that was with CDs. Now it’s strictly vinyl, which is more fun.”

Stinson’s record collection, no doubt, began in his father’s record shop, but it was as he grew older that he began to further refine his own tastes and musical fancies. “My favorite stuff is ’65–’75 soul,” says Stinson. “I like the funkier end of soul.” His leaning in preference has had a great deal to do with how Stinson operates as a DJ. “I play a lot of lesser-known stuff—I get bored with hearing the same Motown and Atlantic tracks you hear in grocery stores,” he says. “I have a secret love for disco because it was the first type of music specifically formatted for DJs.” When pressed for his favorite artists from that time period, Stinson says, “I don’t even have favorite songs, generally. You know, you have your top, but there is just so much good stuff.” Furthermore, “There are a lot of great soul singers that put out one or two killer tracks during a certain era, on a certain label where it all came together.” But for Stinson, the greats for soul must include: Rodger Collins, Otis Redding, James Brown, Dyke & The Blazers, Bobby Powell and Milton Wright. And for R&B, no collection would be complete without Louis Jordan, Jimmy Reed and Hound Dog Taylor.

In the coming year, Stinson hopes to travel extensively—both for business and pleasure—digging for records in famed and not-so-famed records stores, and booking as many gigs as possible both within the country and without: “DJing is something that I do for fun, but record collecting is a bug I’ll probably always have.” From the back room of Randy’s Records to performing at SLUG’s Localized this month to ever expanding opportunities, one can have little doubt that, for DJ Feral Cat, music is a life-long labor of love.