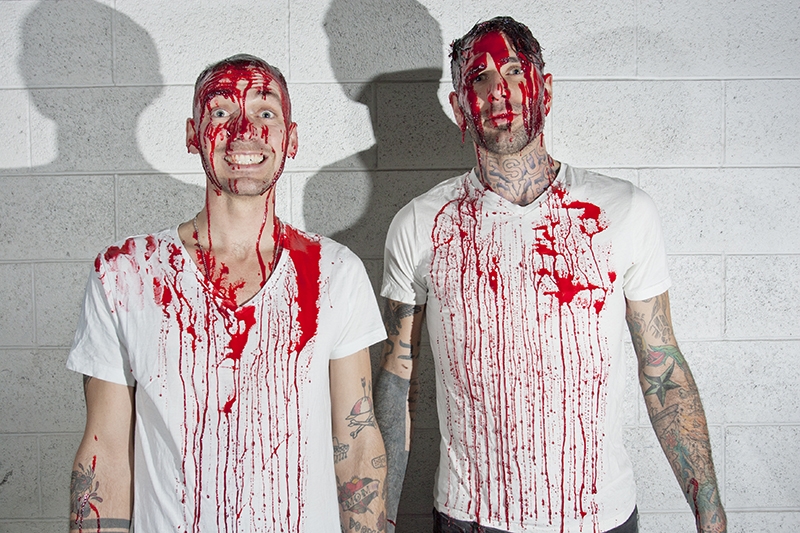 This month’s Localized is a meeting of veterans of Salt Lake’s original punk scene and the new breed of local soundsters creating their own musical voice—the experimental, dub-influenced Muzzle Tung open. The Guard Cats have existed barely a year, but they display a diverse sonic palette. On the other end of the continuum, Gnawing Suspicion was one of the first Salt Lake punk bands coming out of the mid-’80s. This inter-generational insurrection will take place Feb. 14 at Urban Lounge at 9 p.m., emceed by Ischa B. and sponsored by Bohemian Brewery and KRCL. It’s $5 to get in if you’re 21+.

Michael Wright (keyboards, drum machine) and William Lapthorne (guitar, vocals) both 31 years old, tell the story of how their sound came together. The Guard Cats are Lapthorne’s first band, who is originally from Washington State. Wright was in a band called Michigan, and then Agape. “Agape had a very similar formula to Guard Cats,” he says. “My friend [and SLUG alum] Ryan Powers played drum machine and keyboards, and I played bass guitar and did vocals.”
The range of different music The Guard Cats list as influences is an eccentric array that is bound to have rubbed off on them to some degree. Wright lists The Locust as the main one for him, and you can hear the aggressive, sci-fi electronic punk freneticism in their own songs. Lapthorne says, “It’s just day-to-day—whatever songs I’m listening to.” That might include anything from Gorillaz to Depeche Mode to Nick Cave to Nine Inch Nails. Wright continues to say, “I appreciate the creative side of bands like The Locust and those San Diego, early-’90s experimental screamo bands. But we listen to a lot of different music, actually.”
Lapthorne recalls, “We started something the summer before, and it sort of faded out. We never did anything with it.” “Then [Wright] one day sold his drum kit and came home with a drum machine.” That’s how The Guard Cats first formed. Where did the name come from? “He sent me a picture of a gnarled cat guarding his path [Wright works delivery for FedEx]. ”Wright picks up the story: “I was making a delivery at a nursery, and as I’m walking up, I see this cat standing in the middle of the walkway, and it looked at me like it was studying me, and trying to figure me out. As I neared, it stood up, as though things were going to get intense,” he says. The oddly endearing feline inspired their moniker.
In addition to other bands, The Guard Cats have been inspired by other forms of pop culture, like comics and movies. After all, The Locust is a somewhat cartoonish band themselves. “A lot of it is spurred on by comic books and video games,” Lapthorne admits. “We’re both total Marvel whores right now,” he says jokingly, “and video games is more my thing. We’re just sort of dorks.”
“Sharp Teeth,” a song on their Soundcloud page, sounds a bit cartoonish with its lyric: “I had a girlfriend/she had sharp teeth,” for example. “That’s about an ex-girlfriend,” Lapthorne says. “It was the first personal song that I wrote.” They’ve been working on new songs lately, which aren’t online yet, including a song about an arcade, dedicated to David Payne. “He had an arcade in our coffee shop forever that we grew attached to,” says Lapthorne. “Our coffee shop” is Nobrow, at which he has worked since their opening. They played a show there Jan. 15, the night before this interview, with Muzzle Tung and Chalk.
“Originally, we didn’t want to write music about anything too serious,” Lapthrone says. “But the more we write, the more personal it starts to become.” He adds that, when your life is enveloped in geek culture, it comes out in your songs, even when they try to write more “serious” material.
“What’s out there doesn’t represent us very fully,” Lapthorne says of their online output. They are working on a CD release in the next few months. They use a lot of pre-programmed beats and electronic samples, and Wright notes that “it’s been tough because we want to be able to reproduce everything on the CD live, and the thing with the drum machine is we have to program the drums, and the drum machine also has a bass track,” he says, “but with the synth and guitar, we like to keep it so it doesn’t sound so produced. With William playing guitar and me playing synth live, it makes it a little more raw and makes each show a little different.”
Lapthorne explains that “everything online is really polished,” he says. If that’s what he considers polished, their live show must be really raw. “My boss [Alpha Dominche’s Joe Engar] said our live show sounds like The Strokes meets Devo meets Nintendo,” says Wright. That’s an apt descriptor of their sound’s combination of seemingly disparate elements.
Their writing process is just as intense. “One of us will lock ourselves in our room and emerge later, wild-eyed with an idea, and we sit down and grow it from there,” Lapthorne says. Some songs start with guitar, some with synth. They record at home, as they are roommates. “We’re both really awkward,” says Wright. You can detect this in their eccentric musical exclamations.
Some of the songs were written by Lapthorne during a depression, and he feels that they are more expressive, more shoegazey. “He isn’t kidding about disappearing into his room; he’d be there all night, and I’d be concerned, but then he’d spring out in the morning with this whole new song idea—I’m finding joy from him being in these painful situations!” Wright jokes.
They have played a handful of shows since Halloween, with very different, contrasting bands like at Bip Bip Bip’s CD release. “I think we have a sound where we could branch out as far as who we play with,” Wright says.
You can check out The Guard Cats on Facebook at facebook.com/TheGuardCats and Soundcloud at soundcloud.com/theguardcats.
Photos: