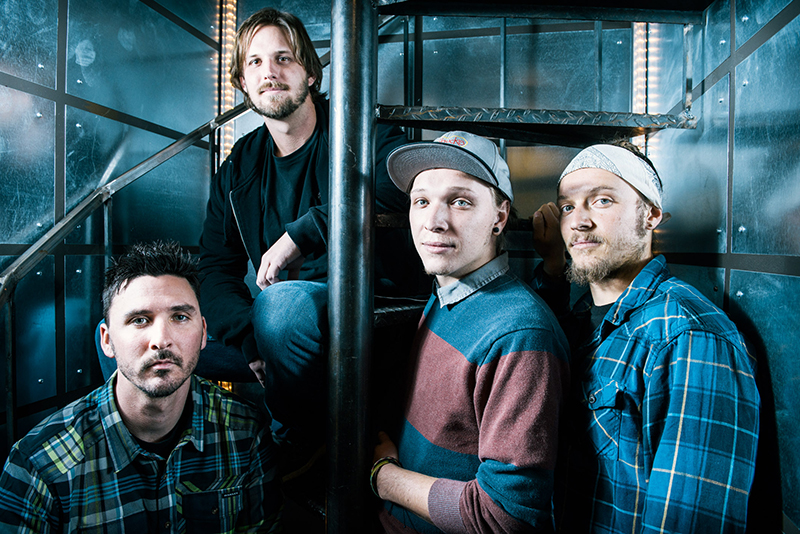 If the winter gloom of Salt Lake City has got you down, look no further than January’s Localized. This month will feature the reggae grooves of headliners Herban Empire and Tribe of I, and opener Wasnatch. Localized is sponsored by Spilt Ink, High West Distillery, Uinta Brewing Co., and KRCL 90.9 FM. As always, Localized is free and will take place at Urban Lounge on Jan. 14 at 8 p.m.

Homegrown alt-reggae group Herban Empire have been a part of the local circuit for almost 10 years, as they are the product of good friends with a shared love for music. Vocalists/guitarists Andrew Cole and Adam Lenkowski met at the University of Utah in 2005 and have been jamming together ever since. “We met at a gazebo jam outside of the dorms,” says Lenkowski. “When we saw each other, we knew it was meant to be.” The interest in the same kind of bands, such as 311 and Sublime, fed into their style, and soon they were creating their own take on the genre.

Brothers/rhythm section Skip and Zach Hardy joined afterward, replacing band members who had moved away. While drummer Skip was at the University of Utah with Cole and Lenkowski, bassist Zach was in high school. That’s when he saw Herban Empire win a Battle of the Bands at the Avalon Theater. While the rest of the band saw it as “the worst recording experience ever” and “a ploy to make money off of bands selling tickets,” Zach remembers looking up to the band. “I remember being 15 and seeing [Herban Empire] and being like, ‘One day, I hope I’m in a band like that.’”

The name Herban Empire came from Lenkowski. “I came up with it in college early on,” he says. “I was probably smoking or something.” Almost a decade later, the band has mostly moved on from their days of partaking in the herbs, but the name Herban Empire has stuck, for better or for worse. “At this point, we’ve had it for so long,” says Skip, who admits that there was one point where the band thought about renaming themselves. “It’s part of who we are,” says Cole, who claims that there’s actually a new focus with regard to the name. “Now, it’s more towards our affection for Herbal Essences shampoo and conditioner.” On a serious note, the band’s name denotes their focus on living an eco-friendly lifestyle with an appreciation for nature, rather than (just) smoking weed.

A love of the outdoors brings the members of Herban Empire together when they play shows such as Oktoberfest or the Utah Avalanche Center benefit show. “It’s such a good vibe with our music—feel-good music—and you have the mountains and the whole scenery,” says Skip. “Personally, I think all of us really look forward to [Oktoberfest] more than any others.” For them, the “mountain echo” in the canyons is the perfect enhancer to their music. However, they also use their indoor shows at A Bar Named Sue or reggae night at The Woodshed as opportunities to get more practice in and to solidify their sound while still reaching a bigger audience.

Though Herban Empire have been on a short, informal hiatus, their recent string of gigs have been the catalyst for new material. Their last self-titled EP came out in 2014, but the band has been amazed that it still opens up opportunities for them. “It’s nice having our album help us out a year and a half later,” says Zach. Cole considers their upcoming shows, including Localized, as a sort of “invigoration.” “We have a lot to get out of our system,” says Lenkowski, referencing the lineup of songs that they would like to record in the upcoming year, hopefully releasing another EP with the same quality as their 2014 release. In addition to this goal, the band also wants to hit more local shows, whether they’re playing or just supporting other local acts. “We’d like to see the reggae scene grow,” says Skip. For them, performances are a kind of practice, a good opportunity to get together and jam and a chance to scope out the other talent forming locally.

Influences of ’90s rock and reggae come through in Herban Empire’s music. The vocal harmonization between Lenkowski and Cole is refreshing over the upbeat rhythms, and the lyrics range from the humorous to the positively simplistic. The label “feel-good music” rings true in both their breezy melodies and their live performances, where the goal is to get as many people involved as possible. “[Everyone] will be forced to dance,” says Cole. “Newcomers are forced to shake the shakers—there’s a lot of force involved.” Ultimately though, the sanguine quality of the music gets everyone dancing. “It just so happens that the stuff we like is easy to dance to and puts people in a good mood,” says Cole. A night where the crowd gets into the music—whether it’s Herban Empire’s usual following at A Bar Named Sue or a bunch of newcomers—is a mission accomplished. “I always love having the newer faces and come up and just really [be] excited about whats happening,” says Zach. “It’s a cool feeling to impress them—not even that, but just helping make their night into something that was fun.”

Check out Herban Empire’s self-titled EP at herbanempire.com, and come ready to dance (and possibly shake the shaker) at Urban Lounge on Jan. 14.