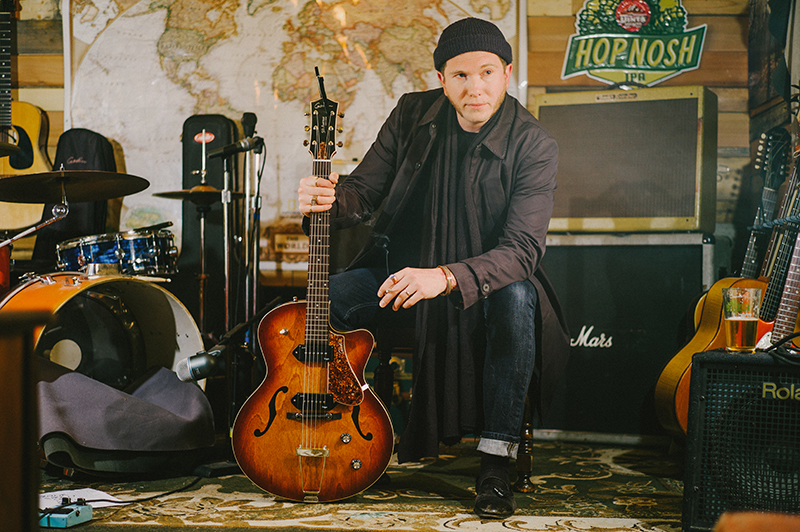 Time-travel through generations of historic and contemporary Americana folk rock in one night at this month’s Localized. Kelli Moyle will kick off the show with her saccharine folk serenades, and the ethereal and electric Johnny Betts will precede the Western-wailing, whiskey-drinking Harold Henry, who will finish off the night. Stop by Urban Lounge on July 13 for the showcase, which is generously and conveniently sponsored by High West Distillery, Uinta Brewing, KRCL 90.9FM and Spilt Ink SLC. This show is 21-plus and free—so what’s your excuse not to?

A homegrown indie-folk singer-songwriter, Johnny Betts, aka John Betts Cowan III, is a multi-instrumentalist from a rich musical background. Despite being a solo local artist, Betts plays as often as possible with a band. “I normally play acoustic shows, but for Localized specifically, I’m going to put a lot more attention to ethereal, spacious, deeper, darker stuff,” says Betts. For July’s Localized, Betts will play primarily his hybrid acoustic-electric guitar, with Dave White on the drums, Joe “Slick” Eslick on the bass, Callie Reed on the violin and potentially another guitarist and pianist.

In his work, the dynamic that ultimately influences Betts is what he calls “haunting folk, indie stuff,” including a mixture of Beck, Pinback and Bill Callahan. Betts is “a writer at heart,” he says. “I love creating music, especially if someone else can enjoy it, and there isn’t really an opportunity for me to stop.” For Betts, writing music is all about intention. “I’m terrible at jamming—I don’t enjoy that process,” he says. For Betts, getting together to play music usually entails an end product, which is probably why he loves collaboration in a formal band setting. Before going solo, Betts played in a few bands from his hometown in Sacramento, California, in which he played the guitar and was the primary songwriter. He played in a melodic rock band called Hi-Fidelity System when he was 15 years old, and then joined Thin December, another melodic rock band, as well as Starring Morgan Freeman, which he describes as “fun and dancey,” like Muse and The Strokes. Presently, Betts plays the drums for another local punk rock, Smiths-esque kind of band, The Detractors, though “it’s really just an opportunity to beat on the drums,” Betts says.

A multi-instrumentalist, Betts started to play music at age 5, when his parents made him learn the piano. “I’m grateful for that now,” says Betts. He later picked up the guitar, bass, drums and keyboard in college. “Guitar became the easiest and most enjoyable form for me to write on,” he says, which is what he plays most of now. Betts performs the entirety of the music from his first album, There Are No “A” Sides—with the exception of cello and drums on two songs—and filled the debut with his own arrangements on the drums, bass and piano. He admits, “I can never actually do that live unless I have a band, so for Localized, I’m playing all new songs that aren’t on that album.” There Are No “A” Sides was his first solo album, a more high-energy compilation of 15 years’ worth of songs.

Betts’ upcoming album will take a more somber turn and is essentially a fresh start—something he’ll be able to play live. “Simplicity has become my ally in a lot of ways lately,” he says. “Right now, I love writing in the studio and creating with the intent to record a song.” Betts approaches his work with the mindset of “How can I produce live what I do in studio or write as sonically, organically and naturally as possible?” He invites feedback on the album, a process that he honors. “I invited friends from a number of ambits, some musicians, some just lovers of music, some more distant,” he says. “We sat here and listened to all the songs, and I asked them to take notes and provide honest critique.”

Regardless of tempo, Betts consistently places a large focus on storytelling and writes poetic and introspective lyrics. “I’m a follower and lover of Jesus,” says Betts. “However, I don’t consider myself religious. ‘Religion’ isn’t even a word that existed in the Bible,” he says. Betts is more a man of faith, and he recognizes the religious struggles some Utahns have in separating, or recognizing the difference, between faith and religion. These are themes that dominate Betts’ lyrics. “My songs come from the angle of ‘the only thing worth being saved from is myself and my own selfishness and filth,’” he says. He explains that “more people can relate to what they’ve done wrong” than they can to what they’ve done right, “because that is usually more subjective.”

The rapport of Betts’ songs even affects venue selection because he likes to keep things intimate. “In the summer, I actually open up the garage and convert the patio to a beer garden, and bands play in here,” he says, pointing to different areas of the quaint studio garage. He converted the backyard garage into a studio, now covered with insulation and with light wood panels, plastered with posters, cassette tapes, action figures and photographs—most of which Betts took himself. In the studio, Betts helps other local musicians like Harold Henry and Kaleb Hanley record their own albums without requiring a big budget.

Betts (johnnybetts.com) truly lives a life of artistry. Since moving to Salt Lake City, Betts has become “part of a growing, expanding community,” he says. “There’s such a beautiful sense of ownership in community and each other’s artistry and music writing.” When he’s not making music, he’s a photographer for SLUG and often spends weekends taking wildlife photographs. “I love hiking and getting lost,” says Betts. While nature doesn’t necessarily spill into his music, perhaps it all comes full circle to his seek-and-create mindset. For a genuine, aesthetic musical display, come check out Johnny Betts, the ethereal, acoustic-electric virtuoso at Urban Lounge, July 13.